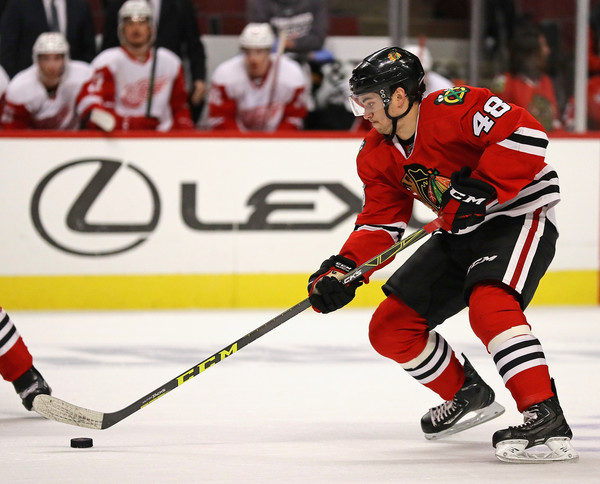 A couple years back, lots of Blackhawks fans liked to complain about the Hawks struggling to get first round picks to make an impact on the NHL roster. But since taking over as Chicago’s General Manager, Stan Bowman has had particular success later in the draft – specifically the sixth round. 2012 – Vinnie Hinostroza (169th overall)
Hinostroza has started to establish himself on the Hawks’ NHL roster this season with 14 points in 46 games. Among sixth round picks from the 2012 NHL Draft, only Toronto’s Connor Brown (61) has played more NHL games than Hinostroza (53). Brown (29) and Joseph Blandisi (17) have more points than Hinostroza’s 14 to date. 2013 – Anthony Louis (181st overall)
Louis, a senior at Miami (OH), has 13 goals and 19 assists in 29 games. He’s had a solid, steady career at Miami that has included 45 goals to date. He’ll be an option for the Blackhawks to sign when his college career ends this year. 2014 – Dylan Sikura (178th overall)
2014 – Ivan Nalimov (179th overall)
Sikura has been one of the hot names among Blackhawks prospects this season while dominating the NCAA at Northeastern. He’s among the nation’s leaders in scoring and might opt to turn pro after this season, his third at Northeastern. Nalimov, 22, is playing in the KHL this season. Listed at 6-4 and 205 pounds, Nalimov has appeared in 18 games between Admiral Vladivostok and Sibir Novosibirsk. Chicago acquired the rights to the pick used on Nalimov in the draft day trade that also brought the pick used on Nick Schmaltz. Here is Roy Radke of the Barrie Colts showing what he does to win! @Sportsnet #whattowin @givanismith24 you're up next! pic.twitter.com/YIlR66wy2d 2016 – Blake Hillman (173rd overall)
Hillman, in his second season at the University of Denver, has five assists in 29 games this season.