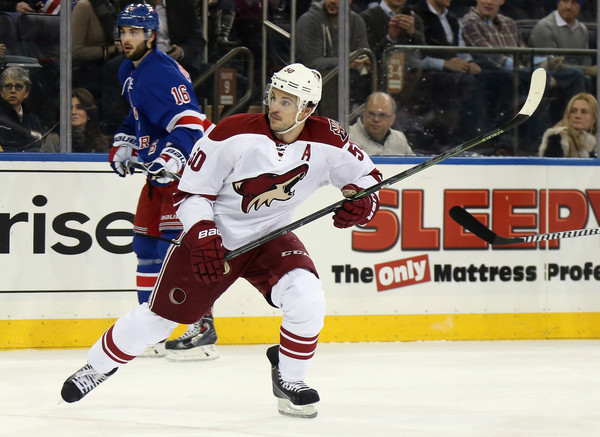 The long-rumored end of Antoine Vermette’s days in Arizona has finally arrived, and he’s headed to Chicago.

On Saturday night, the Blackhawks reportedly acquired the 32-year-old center from Arizona for defenseman Klas Dahlbeck and a first round pick in the 2015 NHL Draft. Vermette was second on the Coyotes with 35 points (13 goals, 22 assists) and is minus-23 in 63 games this season. Somewhat surprisingly, he played 16:25 against the Bruins on Saturday night, winning eight of 18 faceoffs and finishing minus-two in the 4-1 loss.

This season, Vermette has also been credited with 71 hits, 41 blocked shots and 25 takeaways this season while winning 56 percent of his faceoffs. He has been a good power play producer as well; 13 of his 35 points have come with the man advantage.

Vermette was informed of the trade before boarding the plan, but flew home from Boston with his teammates and will join the Hawks in Chicago later. His contract, which carries a $3.75M cap hit, expires after this season.