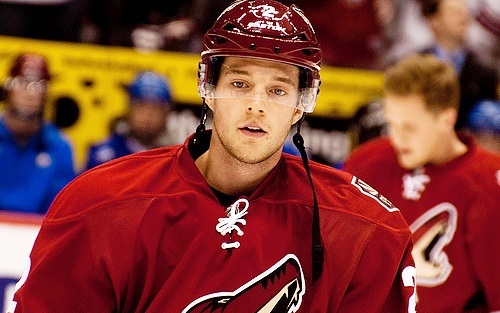 The Blackhawks have reportedly acquired defensemen David Rundblad and Mathieu Brisbois from the Coyotes in exchange for a second round pick in the 2014 Draft. . He has been traded twice before in his career. The Blues traded him to Ottawa for a first round pick in the 2010 Draft – that they used on Vladimir Tarasenko. He was then traded by the Sens to the Coyotes in 2011 in the deal that sent Kyle Turris to Ottawa.

Rundblad has played in 50 NHL games and has nine points in his career. He will join the Blackhawks’ NHL roster.

Brisebois, 21, has one goal, three assists and 30 penalty minutes in 28 games with Portland (AHL) this season. He was immediately assigned to Rockford.

Rundblad is now the fourth player selected in the first round of the 2009 Draft to come through the Blackhawks organization. Nick Leddy was selected immediately prior Rundblad with the 16th overall pick, and Philippe Paradis (Carolina – 27) and Dylan Olsen (Chicago – 28) were also first round picks that year. Jeremy Morin (Atlanta – 45) and Brandon Pirri (Chicago – 59) were second round picks in 2009, meaning Chicago has held the rights to six of the first 60 players selected five years ago.