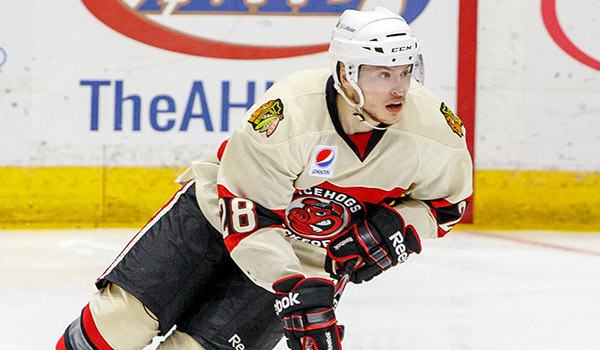 On Thursday morning, the names of players participating in next week’s Blackhawks Prospect Camp was released as were the dates and times of the individual sessions.

What’s interesting looking at the list of players (below) is the mix of players with no professional experience with players who have been on NHL and AHL ice previously. Marko Dano and Kyle Baun both played in the NHL last season; Dano was arguably the centerpiece of the Brandon Saad trade, while Baun signed with Chicago as an undrafted college free agent.

Also attending from Rockford will be Garret Ross, Mathieu Brisebois and Tanner Kero, as well as Mark McNeill and Stephen Johns, two players who hope to be on the NHL roster soon. Robin Press and Carl Dahlstrom signed with Rockford late last season, and Dillon Fournier played a full professional season last year as well. Phillip Danault is not on the list.

Graham Knott and Dennis Gilbert, the Hawks’ top two picks in the 2015 NHL Draft, are on the list, as is defenseman Gustav Forsling, whom the Hawks acquired from Vancouver for Adam Clendening during the 2014-15 season.

Among the drafted NCAA prospects in the organization, Nick Schmaltz, John Hayden, Tyler Motte, Chris Calnan, Luc Snuggerud, Luke Johnson, Mat Iacopelli and Sam Jardine will be at the camp. Vince Hinostroza, who finished his career at Notre Dame last season, will be at the camp with a professional contract already signed.

One player to keep an eye on is forward Fredrik Olofsson, a 2014 draft pick who skated with the Chicago Steel last season. I like his game a lot and he has good size as well. Also of note, 19-year-old winger Yushiroh Hirano from Japan scheduled to attend.

Here is the alphabetical list of players coming to Johnny’s West starting Sunday: