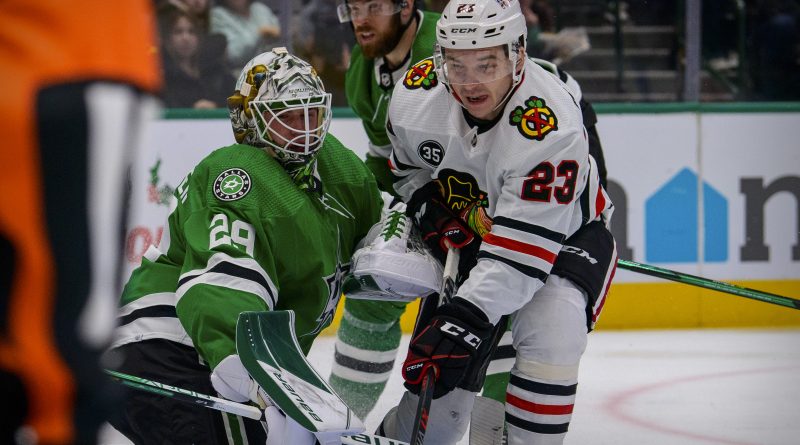 After a less-than-stellar performance on home ice against a COVID-depleted Nashville team, the Blackhawks got on a plane to Dallas. A long night of travel gave way to game day, and Chicago got back on the ice against the Stars looking to bounce back into the win column.

Three minutes into the game and on Connolly’s first shift of the night he leveled former Hawks forward Tanner Kero along the boards. Kero hit the ice similar to the way Juhjar Khaira did after Jacob Trouba knocked him out a couple weeks ago. It was another scary scene you never want to see during a hockey game.

Kero was taken from the ice on a stretcher; the Stars did update that he was awake and responding. He was transported to the hospital for precautionary measures and evaluation. Connolly got a five-minute major and a game misconduct for the hit; his night was over.

On the five-minute powerplay, Dallas made the Blackhawks pay. Joe Pavelski scored twice.

Amplifying the bad start, Dominik Kubalik went to the box two minutes after the Hawks finished the five-minute major. And he was joined there by Jake McCabe nine seconds later. Chicago was able to kill off a 5-on-3 that lasted 1:51 but didn’t start generating offense until the final moments of the first period.

Thanks to the extended special teams time, Dallas out-shot the Hawks 18-4 in the first period and carried a two-goal lead into the second.

Almost four minutes into the second period the Hawks got their first power play. And they made it count. A nice passing sequence from Erik Gustafsson to Patrick Kane to Alex DeBrincat ended with the birthday boy putting home Chicago’s first goal of the night.

Chicago being within one goal lasted a whole 14 seconds before Jason Robertson beat Lankinen for Dallas’ third goal.

Less than 90 seconds after the Robertson goal the Blackhawks were able to climb back to within one again. Brandon Hagel was able to set up Dylan Strome who finally finished to get the Hawks’ second goal.

Strome had a couple good looks earlier in the period off passes from Jonathan Toews but was robbed by Dallas netminder Jake Oettinger who, like DeBrincat, was celebrating a birthday on Saturday.

It appeared Dallas took a 4-2 lead later in the second period, but a review showed that Ryan Suter had caught the puck in his hand (which should have been a penalty). When Suter dropped the puck it bounced into the net without touching his stick, so the goal was taken off the board.

Dallas out-shot Chicago 9-7 in the second period but the Blackhawks were able to actually develop some offense. Chicago’s defense was much better at even strength as well after spending almost half of the first period short-handed.

The Hawks got the first power play of the third period when Jani Hakanpaa went to the box. Unfortunately, the advantage lasted 14 seconds before Seth Jones interfered with Esa Lindell. Jones killing the Hawks’ power play put the teams even at 4-on-4 for 1:46.

Lakinen was terrific in the third period. After a huge Jamie Benn hit on Connor Murphy behind the net, Benn set up Robertson on the doorstep but Lankinen denied him another goal.

With eight minutes left in regulation shortly after the Jones penalty expired, Hagel turned the puck over at the blue line but then took it back on a complete whiff of a clearing attempt by Roope Hintz. Hagel rifled a shot on net with Kubalik in front of Oettinger and the shot went clear into the back of the net. We were tied at three.

Kubalik was credited with a redirect; Hagel got the only assist on the play.

For the fourth straight game the Blackhawks had scored a game-tying or go-ahead goal in the third period. And after a rough first period, Lankinen was playing marvelous hockey. Kubalik also extended his personal point streak to four games as well.

Both teams put 11 shots on net in the third period. The only one that went it came from the Hawks. And for the third straight game the Blackhawks went to overtime.

Lankinen stopped 35 of 38 in regulation. Toews won 14 of 25 faceoffs and Seth Jones and Murphy led Chicago skaters with 21:30 on ice through three periods.

Kane got a breakaway less than one minute into overtime and simply fumbled the pick away as he closed on the net. He was then caught for a penalty as the Stars attacked the other way, and he was caught on the ice for an extended shift that lasted 93 seconds until the whistle finally sounded and Kane went to the box.

The penalty was only the second minor penalty called on Kane all year; his first came against Nashville on Friday night.

Derek King sent Toews, Murphy and McCabe out to start the penalty kill. They were able to clear the puck once, but when the Stars got back in the zone a nice passing sequence ended with John Klingberg scoring the game-winning goal.

Each team put one shot on net in overtime.

The Blackhawks put themselves in too many short-handed situations and tried their hardest to battle through, but they simply couldn’t win a game in which they spent so much time on the penalty kill. The Connolly penalty in the first period dug them a hole, but the subsequent penalties in the first period had them chasing defensively the entire opening 20 minutes.

In total, Dallas was credited with three power play goals on the night.