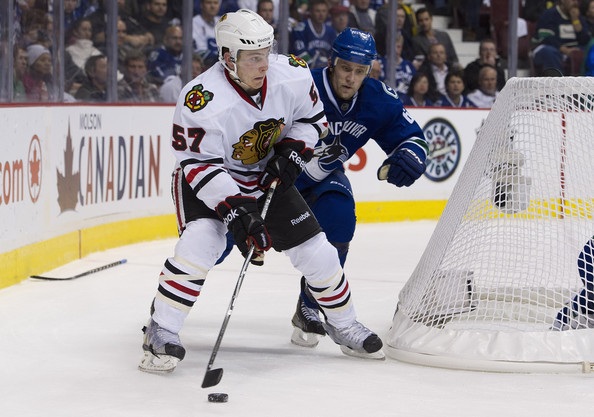 In what became a duel between two scorers, Daniel Sedin and the Canucks squeaked out a 4-3 win.

While one of the Sedins leading the way for Vancouver isn’t surprising, the name Ben Smith might not have been familiar to many Hawks fans before Friday night.

The game was as physical as most would expect coming into a heated rivalry matchup; the Hawks and Canucks combined to dishout 85 hits in the game. But the Blackhawks ability to play physical hockey may have been diminished moving forward in the series when Bryan Bickell appeared to have a wrist cut by a skate in the third period.

It was kids – Smith, Marcus Kruger and Viktor Stalberg – that carried the offense for the Blackhawks for a large part of the night despite not playing top-line minutes. Kruger was only credited with one hit in the game, but was physical and willing to go into corners to get the puck; a battle along the boards set up Stalberg’s goal.

The story of the night, though, was Smith. He was credited with two blocked shots, two hits, one takeaway and scored his two goals on only two shots. He has been a revelation in the two games of the series.

Unfortunately, the group of defensemen wearing the Indian head sweater has been awful so far in the series.

Duncan Keith and Brian Campbell appeared to be blindfolded at times, and Niklas Hjalmarsson didn’t appear to be communicating with anyone at times. Brent Seabrook led the Hawks with seven hits, but took himself out of position on a number of occasions trying to make an unnecessary hit; Vancouver first goal came after Seabrook went for a hit, leaving an open passing lane.

Corey Crawford battled, but just wasn’t good enough. He allowed four goals on 27 shots, but didn’t get much help from the guys in front of him. When the Blackhawks needed a big save, more times than not he made it. Unfortunately, he couldn’t score a fourth goal to push the game to overtime.

The game was as close as the score indicates, and the Blackhawks made a furious push at the end. Chicago should be encouraged, and have at least a little momentum, from a strong third period. But the series still stands at 2-0 in favor of the Canucks, Game Three is absolutely a must-win for the Hawks.

However, coach Joel Quenneville showed enormous confidence in Smith – and a strong lack of confidence in his veterans – by sending the rookie out for the final shift of the game. Jake Dowell was a confirmed healthy scratch in the game, with Quenneville preferring Kruger instead.

Postgame, Quenneville indicated that Bickell was cut in the third period, but said he should be “fine.”