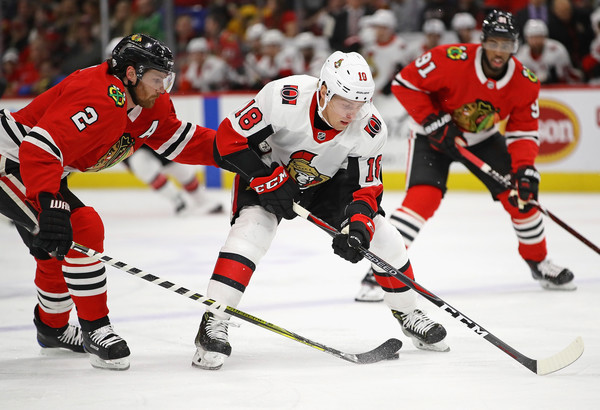 The bad Blackhawks hosted the equally-bad Senators at the United Center on Wednesday night and Chicago continued to show a strong allergic reaction to having a lead.

Patrick Kane got Chicago on the board with his 23rd of the year 14:19 into the first period.

Vinnie Hinostroza and David Kampf picked up assists on the Kane goal.

The Hawks held onto that lead for less than two minutes, however. Zack Smith tied the game at 15:56 and that’s where the opening 20 minutes would end. Chicago out-shot Ottawa 14-4 in the first period but managed only the one goal.

The song remained the same in the second period.

Artem Anisimov scored his 16th of the season at 5:52 into the second.

Kane and Erik Gustafsson were credited with assists on the Anisimov goal.

The Hawks held onto their lead for more than six minutes this time, certainly a moral victory at this point in the season. But Matt Duchene blew a shot threw Jordan Oesterle and past Anton Forsberg to tie the game.

After 40 minutes, the Blackhawks held a 24-18 shot advantage but the game was tied at two.

The third period may have cured insomnia.

And the game went to overtime.

The overtime was entertaining with both sides getting a few really good chances. But the goaltenders – and posts – did their jobs and fans got a shootout because this was a game that deserved a skills competition.

The Hawks went Toews-Kane-Anthony Duclair to start the shootout, and only Kane was able to convert. But only Duchene scored for Ottawa so, again, fittingly, there were extra shooters.

Alex DeBrincat was the fourth shooter for Chicago and he was able to beat Mike Condon. But Mike Hoffman answered.

Anisimov shot fifth for Chicago and got stopped. But Marian Gaborik was shut down by Forsberg.

Tomas Jurco shot sixth for the Blackhawks and failed, hitting the post. Tom Pyatt wasn’t able to beat Forsberg, and the shootout continued.

Nick Schmaltz was called on seventh and he beat Condon. Mark Stone couldn’t get around Forsberg and the Blackhawks emerged victorious.

Before the game, the Blackhawks honored a tremendous two-way center who wore #19 after playing at the University of North Dakota.