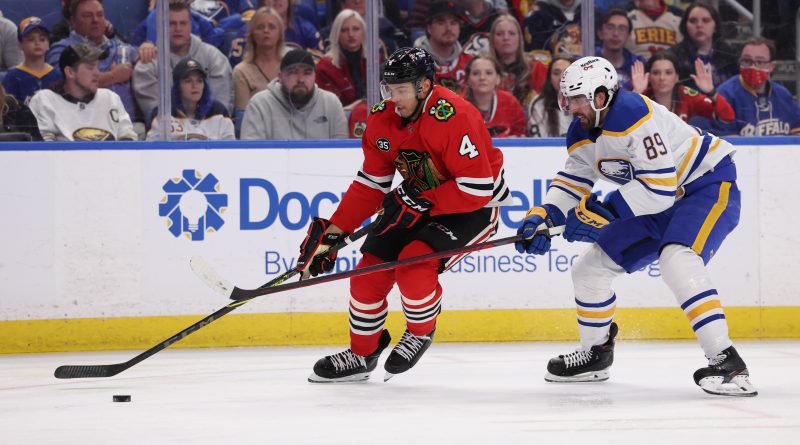 On Friday night, perhaps the most trying, disrupted, frustrating and disappointing season in the history of the Chicago Blackhawks limped to the finish line.

Collin Delia got the nod in net for Chicago. His contract expires after this season, so this was potentially his final appearance for the Blackhawks. He stopped 33 of 36 in the game.

Dominik Kubalik scored Chicago’s first goal. He’s a restricted free agent this summer and might have been appearing in his final game for the Blackhawks. He scored 15 goals in 78 games this year. Over three years with Chicago, Kubalik scored 62 goals in 202 regular season games — 30 of those came in a rookie season that earned him a Calder Trophy finalist position. But his play over the last two years has been consistently inconsistent.

The Blackhawks’ other goal was scored by Dylan Strome, who might be the opposite end of the spectrum from Kubalik. Strome was acquired from the Coyotes (with Brendan Perlini) for Nick Schmaltz in 2018 and had a remarkable first season with Chicago in which he scored 17 goals and added 34 assists in 58 games.

The two years that followed for Strome were spent largely in the doghouse of Jeremy Colliton, who was wasting time and games in the careers of the players he was tasked with trying to lead. He was a debacle as head coach, and took most of the players’ careers in the wrong direction. Strome was one of the bigger enigmas in the Colliton era; he 12 goals in 58 games during the 2019-20 season and then fell all the way to nine goals in 40 games last season.

Chicago admittedly shopped Strome multiple times without success. And, finally, after a coaching change that was months/years overdue, Derek King put Strome back on the ice — and between Patrick Kane and Alex DeBrincat. The result: 22 goals and 26 assists in 69 games this year, the final year of his contract.

Strome will be an RFA this summer and had a lot to prove. I would argue he did what was asked: since Jan. 1, Strome has 41 points in 49 games and won 52.6 percent of his faceoffs. Want a top-six center? Those numbers will do it. He may have played his final game with the Blackhawks on Sunday, but — unlike Kubalik — he made a strong case to the new front office that he could be part of the future solution in Chicago.

But what made this game the perfect capstone to this dysfunctional season wasn’t the fact that Kubalik scored or that Strome scored of that Delia was okay in net. It was that the Blackhawks gave up a lead not once but twice in the game. And, fittingly, former Blackhawks defenseman Henri Jokiharju was in on the overtime game-winner from Casey Mittelstadt.

But there were notes to the future all over this game that are worth considering.

We mentioned the fact that the Blackhawks acquired Strome with Brendan Perlini from Arizona because one of the few parting gifts Stan Bowman left behind was a trade that may pay significant dividends in the future. Bowman traded Perlini to Detroit for Alec Regula in 2019, a deal that wasn’t seen as a big one at the time but we’ve seen enough to be excited about the potential of Regula impacting the blue line in the coming years for the Hawks.

We mentioned that Jokiharju was in on the OT GWG. In July of 2019, Bowman traded him to Buffalo for Alex Nylander. That didn’t work out well for the Blackhawks. However, new GM Kyle Davidson flipped Nylander to Pittsburgh for forward Sam Lafferty earlier this season; Lafferty signed a two-year extension and has been a nice addition to the lineup since the trade.

We can now exhale and move on to bigger and better things. The turmoil on and off the ice with the Chicago Blackhawks organization this season was a lot to contemplate and try to reconcile. We’re looking forward to one of the more important offseasons in recent history for the Blackhawks, and have some exciting developments coming for your coverage of the Chicago Blackhawks as well…