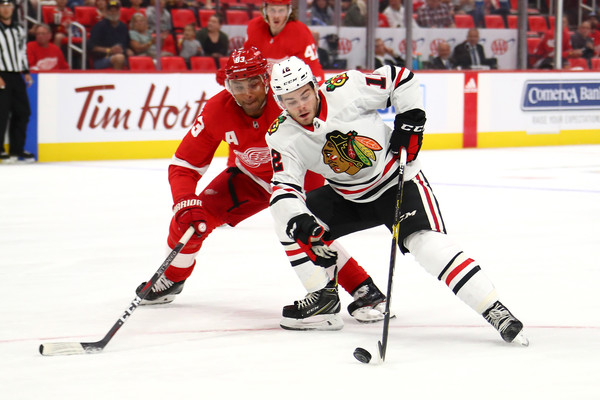 After the 2019-20 season the Chicago Blackhawks have some significant contracts to consider.

Among the players still waiting for a contract:

Each of these players could be looking at the biggest pay day on their rosters; Marner certainly is looking at getting close to the top of the Maple Leafs’ payroll. And the fact that Winnipeg and Colorado are still negotiating with two of their best players means there’s drama in the Hawks’ division – which is a good thing.

The two players the Blackhawks need to take care of are different situations, but both is an intriguing case.

Alex DeBrincat showed that he had the ability to change a game with his scoring ability before his best friend, Dylan Strome, arrived via trade last season. Together they showed the ability to give the Blackhawks two legit scoring lines.

DeBrincat scored 41 goals last year, giving him 69 in his two NHL seasons. He has posted 128 points in 164 games, which is significant for two reasons. One, that’s a terrific point-per-game rate. But more importantly, a player who fell in the draft because of the perception his size couldn’t play in the NHL hasn’t missed a regular season game in two years. He’s been able to stay on the ice – and productive – since he was draft.

Strome is a year older than DeBrincat and struggled to find a role in Arizona before he was traded for Nick Schmaltz. After arriving in Chicago he was tremendously tremendous, producing 17 goals and 34 assists in 58 games. He took pressure off Jonathan Toews at the dot and gave Chicago another good center option when a goal was needed.

Chicago should have ample cap space to pay both of their young forwards, but another position lacks certainty that will impact decisions made by Stan Bowman.

Corey Crawford and Robin Lehner will combine to hit the cap for $11M in the coming season. Both is an unrestricted free agent in one year, though.

Lehner, 28, is coming off a remarkable season and he gives the Blackhawks confidence in net no matter which player is between the pipes this season.

Crawford, 34, has dealt with concussion issues over the past two years that have significantly impact the Hawks’ playoff hopes. Chicago’s lack of depth in net has been an issue for years, and the addition of Lehner helps answer those questions heading into 2019-20. Whether or not this is the final season of Crawford’s career is up to him, but Chicago is in a better place now than they have been in some time.

Should Lehner establish himself as a long-term answer for the Blackhawks, he’ll need to get another deal next summer. Collin Delia is signed for three years at $1M, so he could be an option as a backup in 12 months when we discuss the ’20-21 season. But he was not an answer when the Blackhawks needed a stopper last year; neither was Cam Ward (who recently retired).

As teams all over the NHL try to get their full rosters set for training camp, the Blackhawks – and the agents of their two young forwards – will be paying attention. How much they’re set to make on their next contracts will play a big role in Chicago’s attempt to return to prominence for the coming decade.