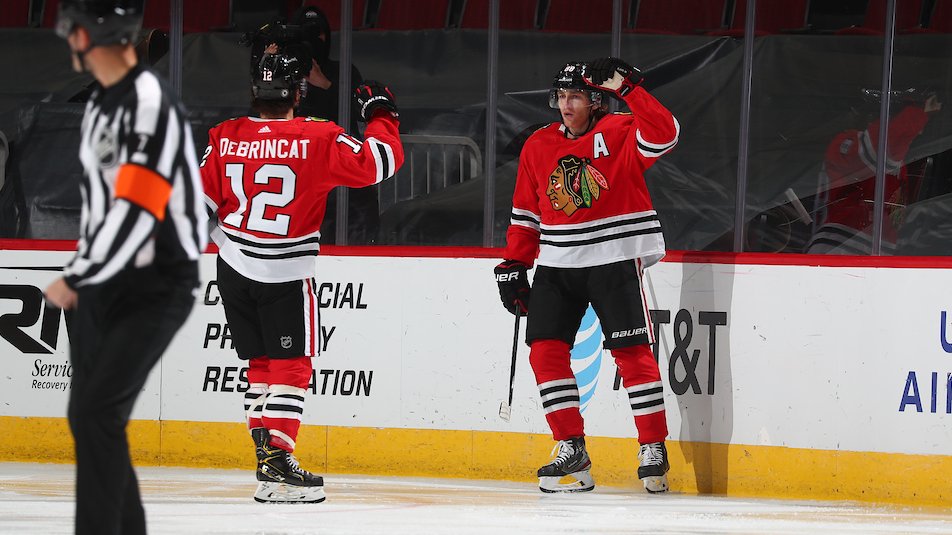 If the Blackhawks were scoreboard watching like the rest of us, they knew the Columbus Blue Jackets took the Carolina Hurricanes to overtime on Thursday night, drawing them within one point of the Hawks in the division standings. That game went final during the second intermission of the Hawks game, at which point Chicago had a two-goal lead despite being outshot badly.

After a furious comeback attempt came up short for the Panthers on Tuesday night, Florida was hoping to bounce back without the services of Sasha Barkov again. Florida dressed seven defensemen on Thursday night.

For the Hawks, Matthew Highmore returned to the lineup in place of MacKenzie Entwistle. Kevin Lankinen was back in net for Chicago; Joel Quenneville countered with his number one, Sergei Bobrovsky.

The Panthers came in losers of two in a row. Florida had not suffered a three-game losing streak yet this year. Something had to give.

Chicago needed Lankinen to be on point again and he was throughout. Patrick Kane and Nikita Zadorov spent a couple minutes in the penalty box in the first period, giving the Panthers early chances. Florida out-shot the Blackhawks 13-7 in the first period but Chicago would start the second period on their first power play of the night.

The Blackhawks took advantage of their first power play opportunity. Kane gave the Hawks a 1-0 lead 65 seconds into the middle frame, his 13th of the season.

Brandon Hagel and Carl Soderberg were credited with the helpers on Kane’s PPG.

Kane and Alex DeBrincat were credited with the assists on Suter’s tenth of the year.

The Panthers continued out-shooting the Blackhawks but Chicago’s two-goal lead was clearly frustrating Florida. When Ryan Carpenter destroyed Eetu Luostarinen with a big hit, MacKenzie Weegar had enough. He initiated a brawl with Carpenter that ended with him on his ass.

According to HockeyFights.com, this was only the second fight of Carpenter’s NHL career. He handled his business well. Weegar was hit with an extra two minutes for initiating and a bonus 10 for misconduct.

With three minutes left in the second period, Florida had a 3-on-none. Three skaters attacking only Lankinen from center ice in. One of the worst line changes we’ve ever seen gave the Panthers a glorious opportunity to get on the board.

But Lankinen said no!

Neither side scored again the second period. When 40 minutes had been completed, Florida had a 30-17 shot advantage; the Panthers had as many shots on net in the second period as the Hawks did through two. Thankfully for Chicago, Lankinen was on his game.

Four minutes into the third period, Zadorov unloaded on Patric Hornqvist. He was already on his way to the box for a lazy, dumb slash well behind the play but the big (legal) hit sent Hornqvist to the room with assistance required. Chicago killed the Zadorov penalty, the fifth unsuccessful Panthers power play of the night.

With 13 minutes left in regulation the Panthers had twice as many shots on net (34) as the Blackhawks (still at 17).

Zadorov kept throwing his weight around throughout the third period but the Hawks were able to stay out of the box after the first penalty of the period.

Bobrovsky skated to the bench with his teammates still chasing two with 2:10 left in regulation. Hagel collected a blocked shot and fired the puck the length of the ice with 84 seconds left on the clock and he found the back of the empty net. Chicago now had a three-goal lead.

It’s good that the Blackhawks scored the extra goal because a questionable penalty was called on Suter inside the final minute. Kane, DeBrincat and Suter rushed up the ice and Kane tried to set up DeBrincat, who was denied by Bobrovsky. Suter was pushed from behind and got a piece of Florida’s netminder and was sent to the box.

Lankinen made a couple saves on the power play to end regulation to keep his record for the night perfect. He stopped 41 shots, the Blackhawks killed six penalties and Chicago picked up two huge regulation wins over the Florida Panthers.