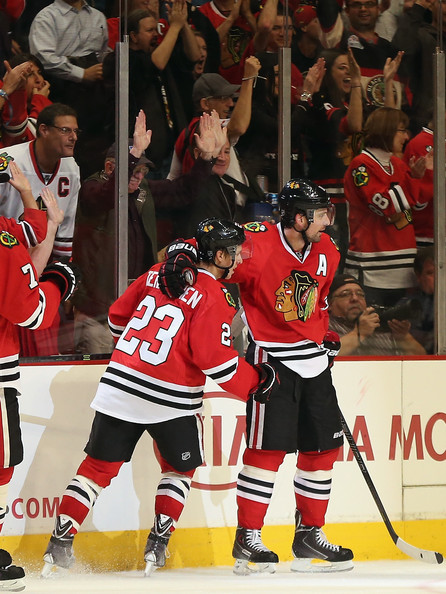 Patrick Sharp and Ben Smith scored second period goals 69 seconds apart and Corey Crawford stopped all 19 shots he faced as the Blackhawks started their 2013 preseason with a 2-0 victory over the Detroit Red Wings. The Hawks started the game with Teuvo Teräväinen between Patrick Kane and Bryan Bickell, but the lines changed frequently. Teräväinen played well with the puck and created space effectively, but won only six of 15 faceoffs. In just under 18 minutes of ice time, he was credited with one shot on net, one missed shot and one takeaway.

Jimmy Hayes continued his strong camp with a very good performance on Tuesday night. He skated only 12:32 in the game but was credited with one blocked shot, one hit, two takeaways and the primary assist on Smith’s goal; Smith had posted up in front of the Detroit net and redirected a Hayes shot from the point past Jonas Gustavsson.

Hayes, Smith and Jeremy Morin looked very comfortable skating with a number of different linemates. Morin spent some time with Sharp and Drew LeBlanc in the second period, and had the primary assist on Sharp’s game-winning goal.

Brandon Saad had an interesting night. He was credited with two hits and a blocked shot in 15:23, but how he was used was more intriguing than his stat line. Saad was used primarily as a center, and won only four of 14 faceoffs in the game. With the Hawks spending only four minutes short-handed in the game, Saad led all Chicago forwards with 1:31 on penalty kill duty. He also spent 2:18 on the power play.

That Blackhawks power play was in mid-season form, failing to score in six opportunities.

Also in mid-season form were a few of the Hawks’ veterans. Patrick Kane showed off the puck handling skills displayed in his viral video earlier in the week on a number of occasions, while Marcus Kruger led the Hawks with four takeaways in the game. Kruger was also credited with an assist on Smith’s goal and two hits in the game, but won only four of ten faceoffs.

Also of note, Joakim Nordstrom looked good in a couple short-handed shifts next to Kruger during the second period. Ryan Stanton also had a nice game with three hits in over 20 minutes of ice time.

Stupidity from Detroit didn’t take long. Forward Teemu Pulkkinen, only six seconds into his first shift and less than three minutes into the game, ran Hawks defenseman Mike Kostka into the boards from behind and was assessed a boarding major and a game misconduct. Kostka spent a few moments down on the ice before leaving, but did not return to the game.

In the second period, Detroit forward Mitchell Callahan followed the lead of Pulkkinen and received a boarding major and a game misconduct for a dangerous hit on Sheldon Brookbank in front of the Hawks’ bench. Brookbank was not hurt on the play, but Brandon Bollig quickly defended his teammate and served a minor roughing penalty for his efforts.

Though listed as active for the game, Andrew Shaw and the Broadhurst brothers did not appear. Before the game, the Hawks announced a number of roster moves. Forward David Gilbert was assigned to the Rockford IceHogs while defensemen Dillon Fournier and Travis Brown and goaltender Brandon Whitney were assigned to their respective junior teams. Chicago also released forwards Wade Brookbank and Pat Mullane and defensemen Joe Gleason, Jared Nightingale and Bobby Shea from training camp.