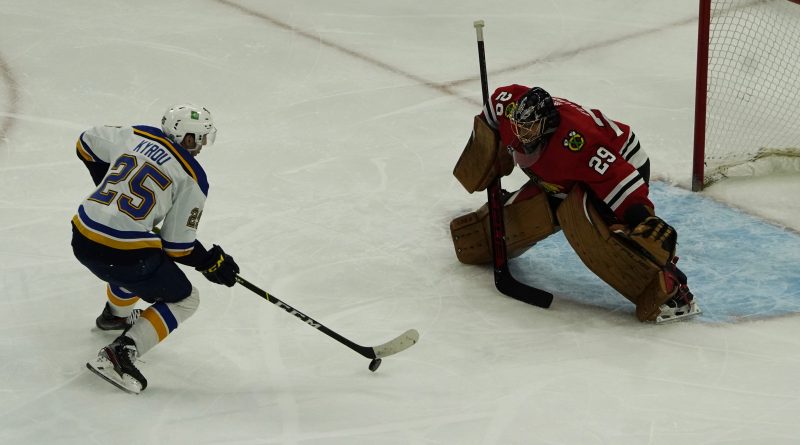 Chicago scored eight times on Friday. So how many would they put on the board Sunday in a matinee against a division rival?

The Blackhawks have had shown a willingness to completely crap the bed for a period (or two… or three) over the past few years. Sunday was one of those afternoons.

The Hawks out-shot the Blues 12-8 in the first period and looked competitive. In fact, one might even say the Blackhawks out-played the Blues for stretches.

Unfortunately, the first intermission was when the game effectively ended for Chicago.

St. Louis started the second period with Brandon Hagel in the box for the Hawks. They weren’t able to score on the power play, thanks to a couple exceptional sequences from Marc-Andre Fleury.

Jordan Kyrou scored 2:26 into the second to give St. Louis a lead they wouldn’t give up.

Pavel Buchnevich added a goal at 6:56 to extend the lead to two. And David Perron scored a power play goal at 18:08 to give St. Louis a three-goal lead heading to the second intermission.

St. Louis out-shot the Hawks only 13-11 officially in the second, but they dominated almost every shift of the period. The Blackhawks were on their heels from the jump and never got a whiff of momentum.

You hoped the Hawks would come out of the room with energy and maybe a little snarl to start a Sunday afternoon game against the hated Blues. But the first goal of the third period came from… Perron. His second of the game extended the lead to four. The Blackhawks were stuck in neutral. Fleury was doing his best but the skaters in front of him were happily turning the puck over far too often to sustain any offense, much less ignite a comeback from a deep deficit.

Sunday marked the sixth time in 54 starts this season the Blackhawks have been shutout. Last year, with what was clearly an inferior roster on paper, the Hawks were shutout once in 56 games.

This game could have easily seen St. Louis score six or seven goals, but Fleury was that good. He deserves better than this team. Hopefully the Blackhawks make a decision soon on their general manager hire so that individual can get to work sorting out the future of this roster.

38 thoughts on “Blackhawks Blanked On Home Ice By Blues”