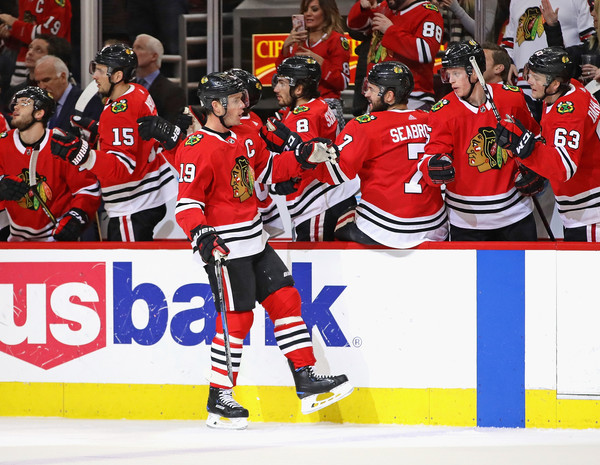 The Blackhawks won’t make the playoffs this year and haven’t been able to score with any consistency all year.

The Capitals will be back in the first round of the playoffs (probably not beyond that because they’re the Capitals), and haven’t struggled to score since Alex Ovechkin arrived. And Braden Holtby was in net for Washington.

So taking the over on Saturday night made sense.

The side that covered did not.

It took six minutes for the game to get its first goal, and it came from Jonathan Toews.

Brandon Saad picked up the assist on Toews’ 16th of the season. It felt like the Hawks had it going, but we’ve all seen it before this season.

Less than four minutes after the Toews goal, Tom Wilson redirected a puck past Anton Forsberg to tie the game. The all-too-familiar sinking feeling felt all over Chicago was the dreaded “great start goes to waste” was about to happen. Again.

At 12:47 into the first, Brandon Saad buried his 15th of the season (and second in as many games) to give Chicago the lead once again.

Vinnie Hinostroza and Toews were credited with assists on the Saad goal.

Chicago kept shooting and getting traffic around the net and eventually the Hawks scored again. Nick Schmaltz scored his 16th of the season with less than two seconds showing on the clock to extend the Hawks lead to 3-1.

Rookie Carl Dahlstrom recorded his first career NHL assist on the Schmaltz goal; Brent Seabrook also picked up a helper on the play.

Chicago went to the dressing room with a two-goal lead after out-shooting the Caps 21-6 in the first period. It was as dominant as the Hawks have looked since Opening Night.

But the second period started with many fans fully expecting the dreaded two-goal lead to evaporate quickly.

It took more than 16 minutes for the next goal to come, and it was from Patrick Kane.

Toews picked up the takeaway and the assist on Kane’s 22nd of the season.

Then a flurry of offense came that made Hawks fans feel nostalgic. Three total goals in 2:07 would give the Hawks a 6-1 lead heading to a third period that saw Washington pull Holtby after allowing all six goals.

The sixth – a power play goal – was scored by Artem Anisimov.

After 40 minutes, the Blackhawks had a 33-12 shot advantage and a 6-1 lead on the scoreboard. Holtby’s night was done and the Hawks couldn’t possibly blow a lead of this size at home… right?

Washington showed no desire to come back from the five-goal deficit in the third period. Because Kane had taken over the team lead with his 22nd goal of the season, Alex DeBrincat caught up to him and scored his 22nd at 8:22 into the third to give the Hawks a 7-1 lead.

Hartman and Patrick Sharp were credited with assists on the DeBrincat goal.

With the DeBrincat goal, the following Blackhawks skaters had a multi-point night on the books:

Neither team did much damage the rest of the way, except Wilson. He left his feet to unload on DeBrincat with four minutes left in regulation. It was a clean hit, but DeBrincat appeared to do some damage to his face on the way down. Hartman took exception to the play and exchanged words with Wilson. Both Hartman and Wilson received minor roughing penalties, and Wilson got an early exit from the game with an additional 10-minute misconduct penalty.

The Blackhawks out-shot the Capitals 44-19. Anton Forsberg made the stop she needed but the Caps happily played the role usually filled recently by the Hawks; it didn’t appear at any time during the game that Washington wanted to be there.

That one felt good.