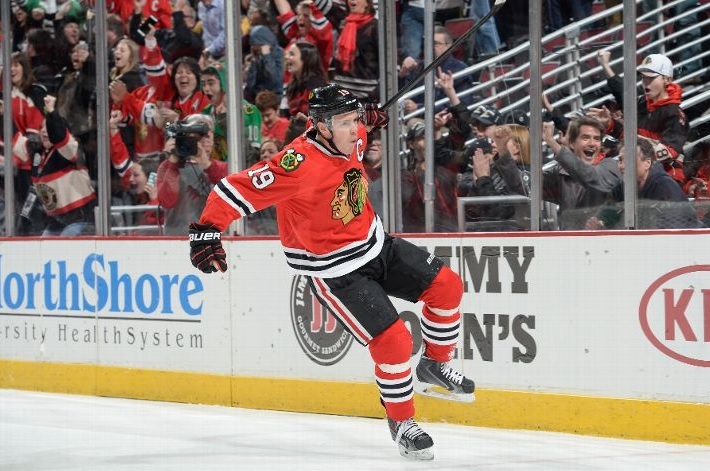 Two new faces joined the Blackhawks lineup on Monday night, but it was a few familiar faces leading the Blackhawks to a dominant win over the Carolina Hurricanes.

Jonathan Toews, Marian Hossa and Brandon Saad had spent most of the season together, but found their line broken up as coach Joel Quenneville looked to find a new mix with center Antoine Vermette on the roster. Kris Versteeg moved up to skate with Toews and Hossa, and Saad found himself on a line with Vermette and Patrick Sharp.

In spite of the line change, Chicago’s three star forwards each impacted the game.

Toews received a perfect pass from Michal Rozsival in the first period and beat Cam Ward for his 20th goal of the season. The Hawks captain found himself in the same position early in the second period, taking a pass from Duncan Keith and scoring a short-handed goal to extend the Hawks’ lead to 2-0. Toews’ 21st of the year held up as the game-winner.

After Toews’ second goal, the wheels fell off for the Canes. Even with an extended 5-on-3 early in the second, the Canes couldn’t take advantage of a struggling Hawks penalty kill unit. That unit also saw changes on Monday with Ben Smith traded to San Jose earlier in the day. Joakim Nordstrom took over on the top unit with Marcus Kruger and played well, but the kills were won by Niklas Hjalmarsson, who on the ice for almost the entire two-man advantage.

Nine minutes into the second, Saad had a shot blocked… right back to him. So he fired again – and scored. Saad’s 20th of the season appeared to break the Canes, who scrambled for the final 11 minutes of the middle period.

Kruger was rewarded for his excellent penalty kill work with his sixth goal of the season in the period’s final five minutes, putting an Andrew Shaw rebound past Ward.

The third period opened with the Blackhawks leading 4-0 and Ward on the bench; Carolina made a change in net after their expensive starter allowed four goals against 18 shots.

John-Michael Liles erased the shutout early in the third period, but Hossa pushed the lead back to four with his 18th goal of the season less than four minutes later. Toews and Rozsival picked up assists on Hossa’s laserbeam, giving Toews a three-point night and a two-point effort for Rozsival.

With just under six minutes remaining in regulation and the Canes putting limited pressure on the Hawks, Corey Crawford made an awkward saved and stayed down. He spoke with the training staff but stayed in the game. Alexander Semin beat Crawford for the second goal of the night for Carolina with 70 seconds left in regulation.

Crawford made 27 saves in the win.

How did the new guys look?

Vermette won only five of 17 faceoffs and was credited with only one takeaway in the game, but showed some good chemistry with Sharp and Saad early in his first game with the club. He played 12:55 in the game.

Timonen, who turns 40 in a few weeks, looked pretty good for a guy who hadn’t played in almost a full year. He skated 17:29 and blocked two shots in the win. Sure, there was some rust, but that should be expected for a guy playing his first game with a new team, much less his first game of the season.

Keith (24:29) and Hjalmarsson (24:23) were the only Hawks skaters to play more than 20 minutes, and each picked up an assist and two blocked shots. Keith also led the Blackhawks with two takeaways, while Brent Seabrook led the way with three blocked shots. He was also credited with three hits and one takeaway in 19:30.

Teuvo Teravainen remained with the Hawks and showed some flashes on the third line with Brad Richards and Bryan Bickell. He skated 11:58 and was credited with two shots on net and two blocked shots in the game. Nordstrom led the Hawks with five hits and spent 1:44 on the penalty kill.

Because Teravainen and Nordstrom remained with the Blackhawks through the deadline, they are ineligible for the AHL playoffs. Both appear to be in Chicago to stay.

Daniel Carcillo and Andrew Desjardins were the scratches. 47 thoughts on “Blackhawks Blow Away Hurricanes”