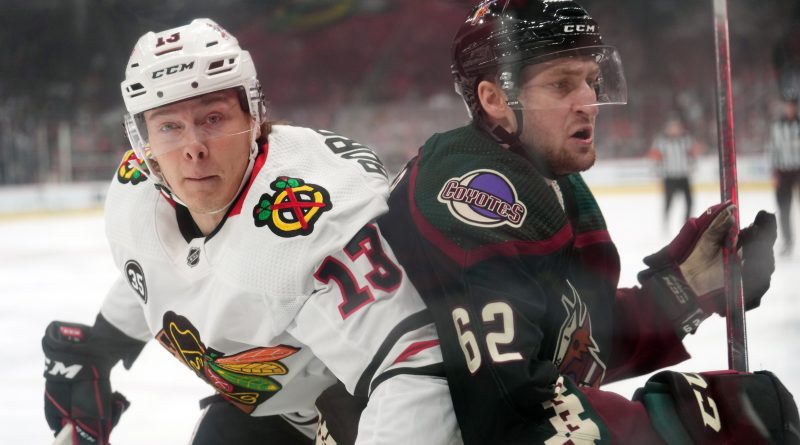 After a week under the weather with COVID, staying up late on a mid-week night to watch an exhilarating Blackhawks vs Coyotes matchup was exactly what the doctor ordered.

In all seriousness, Wednesday had a couple significant notes for Blackhawks fans that weren’t dependent on the final score of the game. Brent Seabrook was celebrating his 37th birthday at home with his beautiful family, and former Hawks forward Andrew Ladd was dressing for his 1,000th career regular season game. So congrats to those two fine gentlemen on their milestones on and off the ice.

When the game started, the Blackhawks jumped all over the Coyotes in the first period. It only took 42 seconds for Jake McCabe to deposit some loose change he found in front of the net to give Chicago a one-goal lead.

Jonathan Toews and Dominik Kubalik were credited with the assists on McCabe’s fourth of the season.

It took almost 15 full minutes for either team to score the next goal, but the Toews line was involved again. This time, Toews and Tyler Johnson were credited with assists on a Kubalik goal.

After 20 minutes of hockey, the Blackhawks were dominating the Coyotes. The credited shots on goal showed the Hawks with a 17-10 advantage and Kevin Lankinen was solid for one full period.

Unfortunately, the trend we’ve seen far too much of this season showed up again in the second. After a solid period with crisp passing and organization, the Blackhawks came out of the room and appeared to leave everything that worked so well in the first period in their stalls. The passing wasn’t crisp and Lankinen was under fire immediately.

Barrett Hayton cut the Hawks’ lead in half at 12:43 into the second with the assists appropriately going to Ladd and Nick Schmaltz. Lankinen did everything he could to keep the puck out of the net but it slipped over the line.

The Hawks could now either respond, or fold and watch the Coyotes roll the next couple goals and run away from them. More times than not when second periods have gone wrong, they’ve gone all the way wrong and leads became deficits.

Not on this night. And it was rookie Alex Vlasic getting a little help from Schmaltz’s skate for his first career NHL goal.

Patrick Kane and Alex DeBrincat picked up the assists and Kane also picked up the puck to save for Vlasic’s collection. Here’s hoping this is the first of many for the kid!

The second period ended with both teams putting 11 shots on net and the Hawks maintaining their two-goal lead. It wasn’t a pretty period and the Coyotes were down to 11 forwards with Jay Beagle leaving early and not coming back, but Chicago was able to get the lead back to two before heading to the room.

At 9:42 into the third, Phil Kessel made a nice play and ripped a shot on net. Nathan Smith won a battle in front of the net with Erik Gustafsson and put home an impressive goal to cut the Hawks’ lead back to just one. Smith, like Vlasic, scored his first career NHL goal.

Alec Regula and Jack McBain exchanged pleasantries at 12:15 and each sat down, putting the game at 4-on-4 action inside the final eight minutes of regulation.

With 32 seconds left in the penalties, Anton Stralman tied the game. A couple ugly turnovers left Lankinen fighting to keep the lead and the passing sequence with Schmaltz and Kessel ended with Stralman point blank. The game was tied with six minutes left in regulation.

The final seconds ticked off the clock and we headed to overtime; the Coyotes erased a two-goal deficit in the third period. The Yotes out-shot the Hawks 12-8 in the third.

So, where did things go wrong in regulation? The Blackhawks had five power plays against the worst penalty kill in the NHL and failed to score on any of them. That’s a big issue — but not a new one. The Hawks have scored on two of their last 25 power plays (dating back to April 7), which isn’t good enough.

Lankinen stopped 30 of 33 in regulation.

During the third period, Mark Lazerus of The Athletic pointed out on Twitter that the Blackhawks had won only 72 percent of the games in which they’ve taken a lead to the third period (18-3-4 coming into Wednesday). Only Buffalo was worse in the entire NHL in that regard.

After having the door slammed on them a couple times in the final two minutes of overtime, Kane set up DeBrincat who put home the game-winner — and finally the 40th goal of the season for DeBrincat.

Toews had two assists and won 15 of 19 faceoffs to lead the Hawks at the dot. Dylan Strome won nine of 16 against his former employer and Sam Lafferty won six of ten.

Henrik Borgstrom made a celebrity guest appearance, skating 6:44 in the game. Kirby Dach was out of the lineup with a shoulder injury so Borgstrom got in the action.