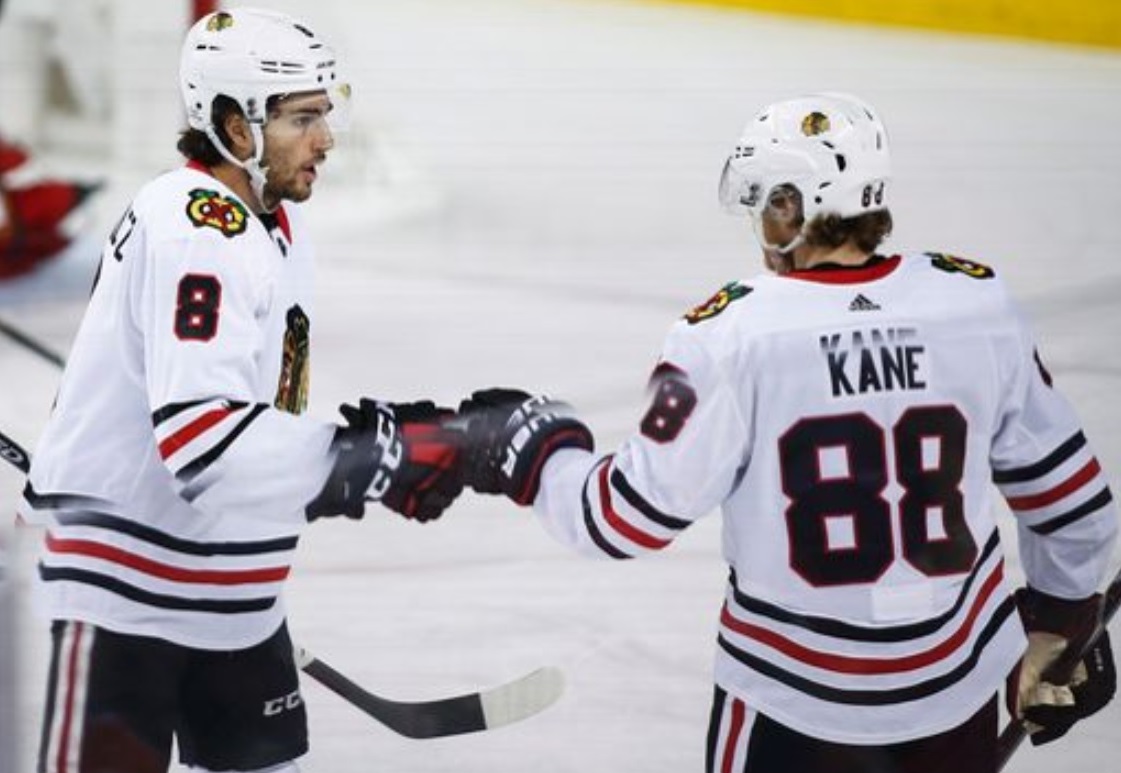 In their last two games, the Blackhawks beat the Preds in Nashville and then got their tails whipped by the Vancouver Canucks. So what the hell were we supposed to expect in Calgary?

For starters, coach Joel Quenneville just went ahead and threw the blender on mid-afternoon. Jeff Glass got the start in net. Patrick Sharp, Ryan Hartman and Michal Kempny were scratched. Brandon Saad started on a line with David Kampf and Lance Bouma. And Artem Anisimov was on the left wing with Patrick Kane and Nick Schmaltz.

Because, honestly, at this point, why not?

The first period flew and both goaltenders showed up ready to play. The Flames held a 13-12 shot advantage after 20 minutes but the Blackhawks were up 1-0 on the scoreboard thanks to a Nick Schmaltz snipe.

Kane picked up the only assist on Schmaltz’s 15th of the season. Neither team took a penalty in the first period, and Glass made a few exceptional saves.

At 1:53 into the second, Kane picked up a second assist and Vinnie Hinostroza extend the Chicago lead to two.

The Hinostroza goal came on the Hawks’ first power play of the game, a stunning turn of events as Chicago realized how to capitalize on an advantage.

Usually it’s the Blackhawks failing to score on the power play that hurts their momentum. On Saturday night, scoring had the same impact. Calgary would score the next two goals in the game; Matt Stajan got the Flames on the board four minutes after the Hinostroza goal and then Johnny Gaudreau tied the game at 12:33.

The flurry of goals didn’t take anything away from the strong play between the pipes for either side. Glass made a few more incredible saves after the Gaudreau goal to keep the game tied until Anthony Duclair took a turnover the other way and beat Mike Smith to get the lead back for Chicago.

There wasn’t an assist on the Duclair goal.

The bad news: the Hawks had scored at least three times in only six of 13 games this calendar year coming into Saturday night.

Shots were 14-12 in favor of Calgary in the second with both sides scoring twice. The Blackhawks did take their first penalty of the game late in the second period when Bouma went off. He returned to the penalty box for 32 seconds to start the third period and his teammates were able to kill the rest of the Calgary advantage.

Michael Frolik took advantage of his former team after an unfortunate Connor Murphy turnover behind the Hawks’ net. Mikael Backlund fed Frolik on the doorstep and the game was tied with 10:10 left in regulation. At that point, Chicago had generated only one shot on net in the third period.

With a little more than six minutes left in regulation, Alex DeBrincat was clearly interfered with while trying to chase down a puck in the offensive zone but there was no call – a theme throughout the game. There were calls on both sides that were avoided/missed all night, but with the Hawks struggling to get anything going offensively in the third period the missed call that would have send Mark Giordano to the box late felt big considering the need for the Blackhawks to win games at this stage in the season.

The Hawks continued to struggled to get a good shot on net and one of the results that doesn’t help them as much as they need – an overtime decision – became a reality as 60 minutes expired with the score tied at three.

Calgary out-shot Chicago 11-3 in the third period – a period the Blackhawks entered with a lead in a game they had to win.

Sean Monahan ended the game 59 seconds into the overtime, picking up the second point for Calgary. And Chicago, who had a two-goal lead, left with only one point achieved.

90 thoughts on “Blackhawks Blow Lead, Fall To Flames In OT”