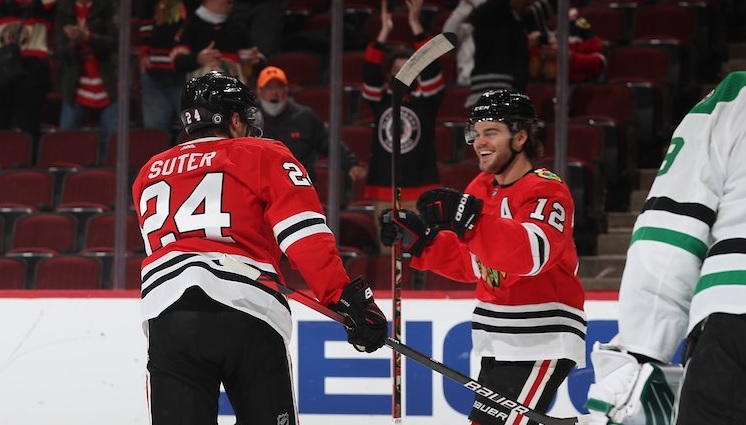 For the final time in the 2021 season the Chicago Blackhawks took the ice on Monday night. Coach Jeremy Colliton rolled with seven defensemen again, opting to only change his goaltender to Collin Delia and swap Dylan Strome in for Adam Gaudette up front.

So how would the Blackhawks finish their regular season?

The start was terrific. Alex DeBrincat got a breakaway on his first shift and converted for his 32nd goal of the season just 53 seconds into the game.

Pius Suter was credited with the only assist. For DeBrincat, the goal was another great stat in a really good, bounce-back season.

Alex DeBrincat scored his team-leading 30th goal of the season and has now found the back of the net at least once in each of the @NHLBlackhawks’ last six games. #NHLStats pic.twitter.com/NHtYaxM58N

DeBrincat and Suter weren’t done. In fact, they were just getting busy. Less than 30 seconds later DeBrincat returned the favor, setting up Suter’s 14th of the season.

Strome picked up an assist on Suter’s goal as well.

So two goals in 82 seconds to open the finale. Not bad.

Chicago didn’t keep a clean sheet for the full opening 20 minutes, however. Joe Pavelski cut the lead in half at 15:30 into the first, ending Delia’s shutout bid.

When 20 minutes were off the board, the Blackhawks were getting out-shot 14-5 but held a 2-1 lead. Delia was good, the Hawks’ passing was not but the score held.

The second period did not start as quickly as the first. Indeed, the Blackhawks struggled to generate much offense at all after their two early goals. It took more than 16 minutes for another goal to be scored, and it came from the Hawks again. Vinnie Hinostroza and Strome were off to the races and Hinostroza politely set up Strome for his ninth of the season.

Dominik Kubalik picked up the second helper on Strome’s goal.

It felt like the Hawks were going to take a two-goal lead to the room but Hinostroza took a penalty with six seconds left in the period. After the viewing audience at home spent about 60 seconds listening to Eddie Olczyk explain how the Stars were going to score, Dallas did almost precisely what Edzo warned about and cut the lead back to one.

Miro Heiskanen’s goal with two seconds left in the period took the wind out of what had been a period of survival for the Blackhawks. Dallas out-shot the Hawks 16-5 in the second, giving them a 30-10 shot advantage after 40 minutes. And yet Delia and his teammates were winning 3-2.

Mike Hardman was credited with eight hits in 8:08 in the first two periods.

The Hawks had 20 minutes (hopefully) left in their season. Would they hang onto their lead?

It took nearly eight minutes for the next goal, but (again) it came from the Blackhawks. Hinostroza made up for his penalty at the end of the second period, scoring his fourth of the season and the Hawks’ fourth of the night.

Hardman and David Kampf were credited with the assists.

Unfortunately, two minutes later Joel Kiviranta went 1-on-3 and somehow beat Delia. Nikita Zadorov had a great angle watching the play unfold in front of him and Ian Mitchell couldn’t decide which angle to take away. Meanwhile, Kiviranta walked in and cut the lead back to one.

Dallas’ next shot on net tied the game. Jason Dickinson scored less than two minutes after the Kiviranta score to bring the teams even.

MacKenzie Entwistle got caught tripping and went to the box 34 seconds after the Dickinson goal, and the wheels felt like they were close to coming off. Delia made a huge save in the opening ten seconds of the Dallas power play to keep the score tied.

Chicago killed the penalty but the shot totals continued to overwhelmingly favor the Stars. With 20 seconds left in regulation and the Hawks getting out-shot 47-15, Radek Faksa hit Connor Murphy in the mouth with a high stick and was sent off for four minutes.

The Hawks got a few great shots on net in the limited advantage at the end of regulation but couldn’t finish it. So the final game of the season would fittingly require overtime after the Blackhawks had a two-goal lead in the third period.

The 47 shots allowed by the Blackhawks are the most in the 2021 season. Delia stopped 43 in regulation. Chicago put 18 shots on net in 60 minutes.

Chicago sent out Suter, Kane, DeBrincat and Kubalik for the power play in overtime and that four stayed on the ice for almost the entire remaining 3:40 without success. Dallas was able to kill the double-minor and the two teams went back to 3-on-3 hockey for the final 73 seconds of OT.

With 30 seconds left in OT, a Dallas shot hit Delia high and he left a fat rebound for Robertson to tap in for the game-winning goal. It was an unfortunate end to a long night for Delia, who faced 50 shots and watched his teammates waste a four-minute power play to open overtime.