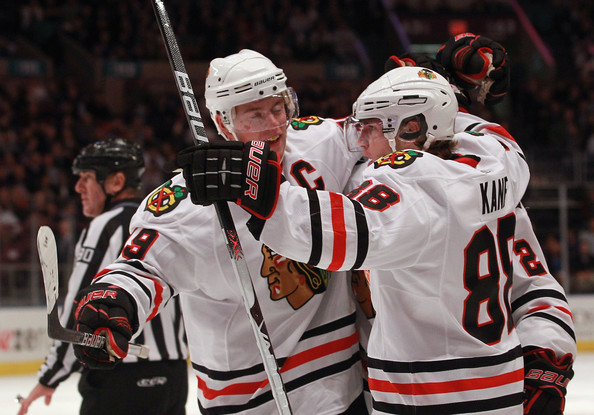 Where’s Bon Jovi when you want to scream “We’re half way there”?

And, more appropriately, where is the sanity from these Chicago Blackhawks?

If, three games ago, you were told that the Hawks would outscore their opponents 14-8 in the first three games of the trip, most fans would be thrilled. And yet somehow Hawks fans have more questions than answers at the mid-way point in the annual Circus Trip.

A 5-0 win, a 7-2 loss and a 7-1 win have been the results so far. In both of the Blackhawks victories, the domination has been so complete that their opponents have pulled their starting netminders. In the middle game, the Hawks looked pathetic.

Patrick Kane has five points, Marian Hossa has four and Jonathan Toews has four goals in the three games. Patrick Sharp has also pitched in three points. All the big stars brought their game on the trip.

But Fernando Pisani has added three points and Troy Brouwer has added two goals as well. Everyone is contributing on the trip so far.

Yet something doesn’t seem right.

What continues to frustrate Blackhawks fans is how easily this year’s team can turn “it” on and dominate teams, and yet how mediocre they can look at other times. The same team that lost twice to the Edmonton Oilers twice in Chicago destroyed them in Edmonton, and then turned around and looked like a high school team against a struggling, bad Calgary team. How did the team respond to being blown out? Wrecking the Canucks in Vancouver.

The talent is absolutely there for this year’s Blackhawks team to be a dominant force in the Western Conference. But the effort isn’t there every night. If they can put together more games like the wins in Edmonton and Vancouver, and eliminate the ugly no-shows like they had in Calgary, this team will accomplish their goals for the circus trip and become a scary force heading into 2011.

Through three games, here are the totals for the Blackhawks skaters:

One thought on “Blackhawks Blow Out Canucks, Reach Mid-Point of Circus Trip”