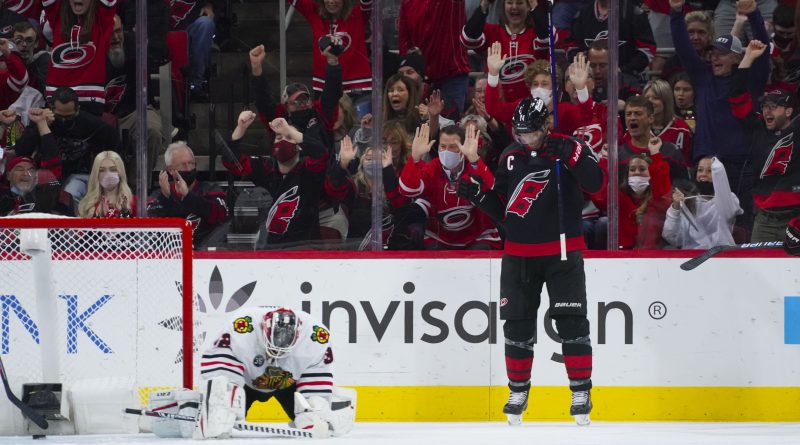 So, how’s your week been?

On Friday night, the Blackhawks limped into Carolina with nothing but losses — on and off the ice — thus far this season. It’s been ugly on the ice, but the team hoped to take some momentum away from a better effort against Toronto and try to win a game against an undefeated Canes team on their home ice.

Brandon Hagel got the Blackhawks on the board with the first goal of the night. Jonathan Toews made a nice play with the puck to set up Hagel and he finished.

Chicago got the first power play of the game and made it count. Adam Gaudette whipped a pretty backhand into the net to give the Blackhawks a 2-1 lead.

Then the wheels fell off.

After 20 minutes, the Canes were out-shooting the Blackhawks 18-10 and were up 4-2 on the scoreboard; they scored the final three goals of the first period.

Carolina then scored the only two goals of the second period to take a 6-2 lead to the room after 40 minutes. Sebastian Aho scored a powerplay goal 3:43 into the second and then Andrei Svechnikov scored at 6:16.

Chicago was getting embarrassed on the ice. The Canes are clearly one of the better teams in the league and the Blackhawks simply couldn’t compete. But the game started to get increasingly physical in the middle of the second period.

Vincent Trocheck cross checked Tyler Johnson into the back of a Carolina skater and Johnson went down hard. He left the ice immediately and did not return.

After two periods, the Blackhawks were down four goals on the scoreboard and had lost Johnson for the rest of the game.

Carolina had six goals from six different players. Two-thirds of the Canes’ lineup had a point through two periods; 12 players had a point.

Thankfully, Reese Johnson dropped the gloves with DeAngelo so the two could continue a conversation they had in the first period. Johnson landed a good right before the two went to the ice. Chicago’s rookie collected five penalty minutes for his effort. DeAngelo remains trash.

Seven minutes into the third period, Connor Murphy exacted revenge for Trocheck’s hit on Johnson. Murphy hammered him from behind and a penalty wasn’t called on the Blackhawks’ veteran defenseman. Three penalties were called during the mess that followed as Carolina players converged on Murphy. Two of those penalties were on Svechnikov and the Blackhawks got a power play.

Alex DeBrincat scored his fourth of the year on the power play to cut the lead to three.

That would be it for the night. It appeared Philipp Kurashev put the puck in the net with 48 seconds left in regulation but the official video review found that Gaudette had interfered with Antti Raanta and the goal didn’t count. Kurashev had a solid night so it would have been nice to see his effort rewarded with a point (or two) but that isn’t how things are going for the Hawks.

When the wheels are off, it takes a lot to put them back on and the Blackhawks are playing like absolute garbage right now.

Isaak Phillips made his NHL debut and collected his first two penalty minutes in the second period.

Toews won 16 of 23 faceoffs and picked up an assist in the game. DeBrincat and Seth Jones led Chicago with four shots on net. Lankinen allowed all six goals while facing 35 shots.

Chicago is in St. Louis on Saturday night.

37 thoughts on “Blackhawks Blown Out By Hurricanes”