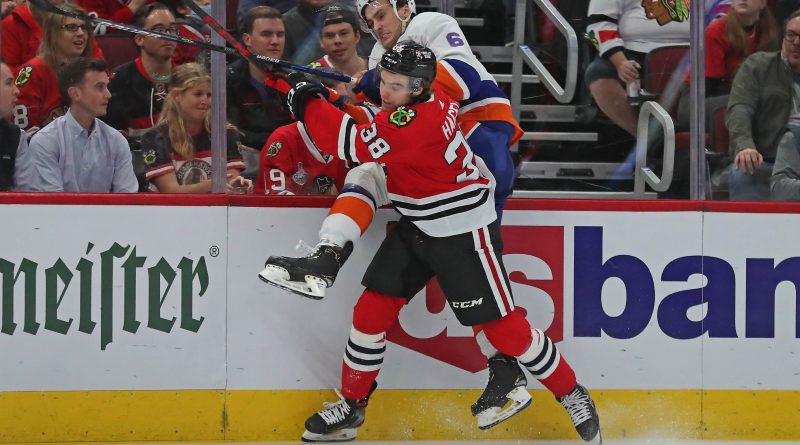 The Blackhawks hosted the struggling New York Islanders in their home opener on Tuesday night. Before the game the team honored Tony Esposito. There as a better crowd than the Blackhawks expected; ESPN mentioned the Hawks’ concerns about attendance during the broadcast.

Remember when every game sold out?

At least the Blackhawks didn’t suck immediately on Tuesday night. Chicago actually out-shot the Isles 18-8 in the first period but Ilya Sorokin was terrific.

Anthony Beauvillier scored four minutes into the second period, but the Blackhawks were doing a much better job of skating. The passing still left a lot to be desired and it was still hard to discern why the lines were put together they way they were with the team struggling to score (see: Kubalik-Toews-Khaira already in the early second period), but the Hawks were hanging around.

After 40 minutes, the Blackhawks had a 31-21 shot advantage but were down 1-0. After dominating the first period, the Blackhawks didn’t own the second nearly as much. Indeed, the second period felt more even with the Isles grabbing the lead.

And the wheels fell off.

Oliver Wahlstrom was noticeable all night for the Islanders and he got on the board 48 seconds into the third period. An ugly turnover ended up in the back of the net (sound familiar?) as Henrik Borgstrom, who had been having a nice game, tried a pass across the blue line that failed miserably.

Eight minutes into the third, Matt Martin absolutely hammered Mike Hardman into the boards. Hardman, who was recalled before this game, went into the glass hard with his head and wobbled his way to the bench. It didn’t look great for Hardman (the Dept. of Player Safety may take a look at the hit) and Juhjar Khaira dropped the gloves with Martin briefly in response.

While Khaira and Martin sat, the Islanders extended their lead to three. Wahlstrom scored his second of the night and the game felt like it was pretty much over nine minutes into the third.

Indeed, ESPN’s crew noted that many of the fans started for the exits after the Islanders’ third goal of the night.

Those who stayed voiced their frustration. The boos were loud. Hopefully more than fans noticed them.

Because when Cal Clutterbuck scored 11 minutes into the third period, Chicago saw a good start turn into a blowout loss. Another fat, cooked number in a period against a Blackhawks team that keeps telling the media they’re buying what Jeremy Colliton is selling and they just need more time to get used to playing with each other.

The Islanders came into the game 0-2-0 and had been outscored 11-4 in those two games. Meanwhile, the Blackhawks showed another national audience that, even with all the money Stan Bowman spent in the offseason, this team might be the worst 5-on-5 team in the NHL.

Mackenzie Entwistle accepted a gorgeous pass from Kirby Dach and deposited the Blackhawks’ only goal of the night with 26 seconds left on the clock.

However, there was a video review to see if the Blackhawks were offside on the play. The goal stood, the horn sounded, and the teams skated out the final 26 seconds of another ugly loss to start the season for the Chicago Blackhawks.

Dach won half of his 12 faceoffs; he was the only Blackhawks skater who took more than one faceoff to win at least half of his draws.

The remaining fans boo the team off the ice. Rough times for the Blackhawks. pic.twitter.com/mwFSnDe3Rb

There needs to be a change in voice behind the bench. Will the empty seats and boos make an impact?

94 thoughts on “Blackhawks Blown Out By Islanders In Home Opener”