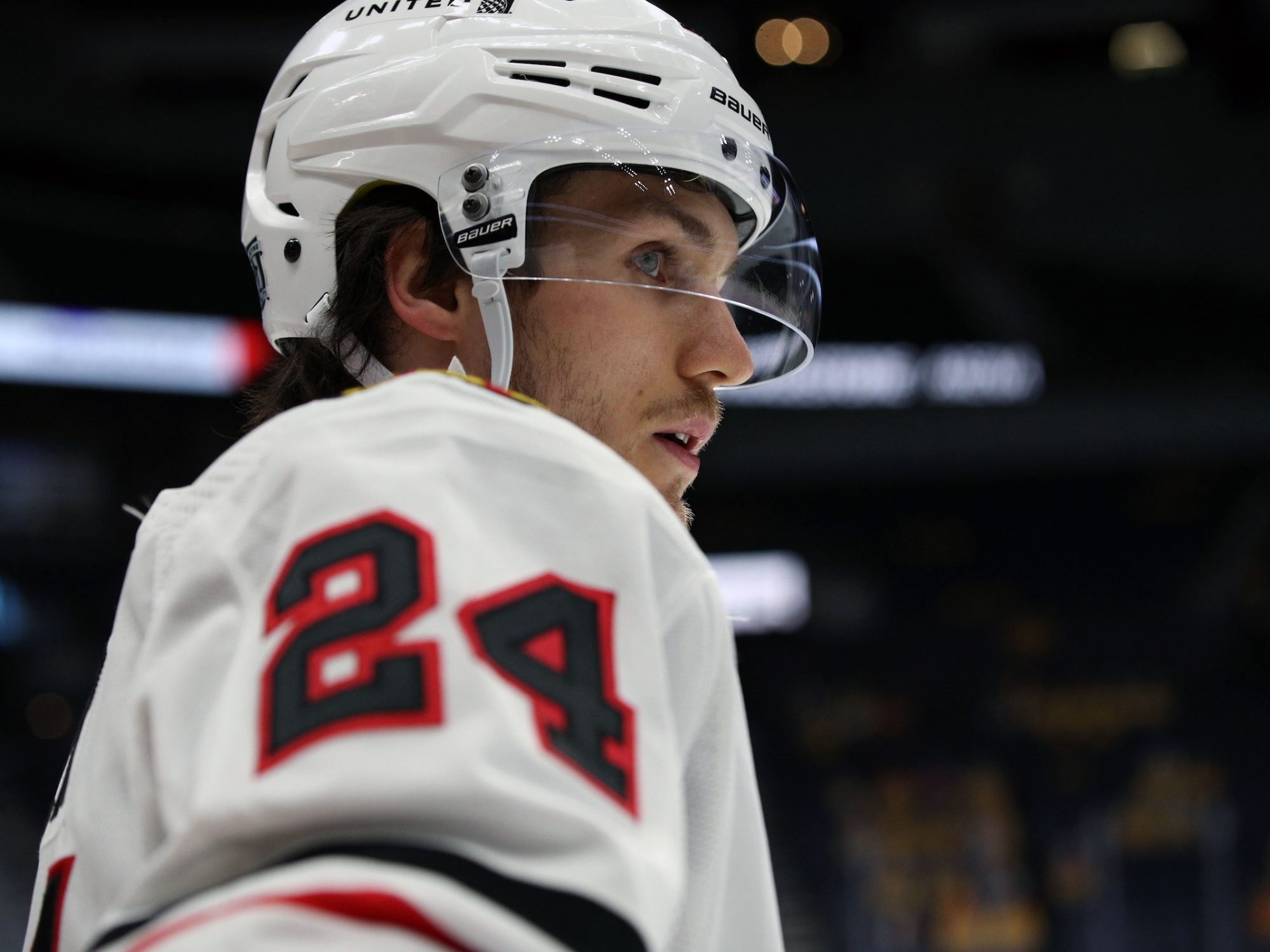 The Blackhawks rolled into Nashville for the first of three “gotta have it” games on Monday night. Shortly before puck drop, the lineups were released. Chicago was without Brandon Hagel, who was waiting for COVID test results.

In his place: Adam Gaudette, who would make his Blackhawks debut in a huge game.

There are times when it appears Jeremy Colliton is in over his head (sometimes way over his head) and the lines Chicago skated during warmups screamed for the help of someone with a clue. Colliton had separated Patrick Kane and Alex DeBrincat… and put Gaudette (again, making his Blackhawks debut) on the top line with DeBrincat and Kirby Dach. Kane was on a line with… Vinnie Hinostroza and Pius Suter.

Also scratched from the game: Adam Boqvist and Ian Mitchell. Colliton was rolling with Wyatt Kalynuk and Riley Stillman with his veteran four of Duncan Keith, Calvin de Haan (who returns from a hip issue), Connor Murphy and Nikita Zadorov. So two of the young defensemen many feel could be a big part of the future were watching from home.

So just judging by the way the coaching staff was lining up to start the game, Chicago was going to have its hands full on a night the entire division as in action.

Obviously the Hawks needed to get off to a good, quick start. When the puck dropped… they didn’t. And six minutes in the Predators had a 1-0 lead on an Matt Duchene goal. The forward line of DeBrincat, Dach and Gaudette was on the ice for the Duchene goal.

The Blackhawks were struggling to complete passes early on and running into the resistance they have all season against the Preds. Multiple players broke down what Nashville has done effectively against the Hawks this year during the pregame media scrum but that knowledge clearly wasn’t translating into any chance, much less success, on the ice.

Kalynuk wasn’t heard from after his second shift; he was on the wrong end of a big hit from Tanner Jeannot (who was recalled by Nashville before the game) and didn’t return.

Wyatt Kalynuk exited the game early in the first period after a hit by Tanner Jeannot. #Blackhawks #Preds pic.twitter.com/uyu82pQQ3s

The Hawks desperately needed something to change the momentum and Nashville did them a favor. Mattias Ekholm went to the box for tripping and the Blackhawks (gasp) scored a power play goal. DeBrincat sniped home his 23rd of the year to tie the game with 4:46 left in the first period.

Suter and Kane were credited with the assists on DeBrincat’s goal.

Less than 90 seconds after the DeBrincat goal, Yakov Trenin went to the box – also for tripping. After scoring a power play goal to tie the game, Chicago was quickly headed back on the advantage. Chicago wasn’t able to get another goal on this power play and dodged a good opportunity after the advantage ended inside the final minute of the period.

The horn sounded to close the opening 20 minutes of hockey and the Hawks had escaped a sloppy start to take a tie score to the room. Nashville out-shot Chicago 9-8 in the first. Kevin Lankinen made a few good saves to keep the Hawks in the game.

Kalynuk skated 1:42 in the period and did not return. The Hawks announced at the start of the second period that he would not return to the game because of a hip injury.

In his first period with the team, Gaudette skated 2:54 without a mark in the box score beyond the minus-one.

Kane skated 8:21 in the first period.

Checking the scoreboard, Dallas had a 2-1 lead over Detroit in the second period and Florida led Columbus 3-1 after two as the Hawks started their second period.

Nashville came out putting heavy pressure on the Blackhawks in the second the same way they did in the first. Lankinen made a huge save without his stick early in the period, but the Preds kept coming. Calle Jarnkrok beat Lankinen at 4:48 to give the Preds a 2-1 lead.

Zadorov probably couldn’t have played Jarnkrok worse if he had to; he whiffed trying to engage the Nashville forward to put himself out of position – and he started the play in the wrong spot. Another reminder that Zadorov was in the lineup while Boqvist and Mitchell were not.

Less than 60 seconds after the Jarnkrok goal, Mattias Ekholm took a Keith turnover the other way and beat Lankinen to extend the lead to two. You could see the wheels falling off. The momentum was completely with the Preds, Lankinen was fighting it in the period and Nashville was making the Blackhawks pay for poor execution.

Thankfully the Preds failed to count and were caught with too many skaters on the ice in the middle of their power play. For 55 seconds the teams would be 4-on-4 before the Hawks went to the advantage.

As they have at times throughout the season, the Blackhawks’ fourth line changed the story. David Kampf, Ryan Carpenter were with Gaudette and were able to put together some strong pressure. Gaudette was in the middle of the mess and it was Kampf who scored for the first time in more than a full calendar year (50 games personally) to bring the Blackhawks within one.

Gaudette was credited with his first assist as a member of the Blackhawks on the goal.

With 3:42 left in the second, Keith was sent to the box for tripping. Already down one defenseman, Keith going to the box put the Hawks even more short-handed for two big minutes. Chicago killed the penalty and the second period limped to a close with neither side scoring another goal.

Gaudette skated 5:28 (seven shifts) through two periods – the lowest among all Chicago forwards. But he had one shot on net and an assist on the Kampf goal.

Updating the scoreboard in the division as the second intermission came to a close:

So the Blackhawks knew there was a chance Dallas could inch closer with a win and, obviously, losing two points to Nashville in the first of these three games would hurt.

The Preds scored again 41 seconds into the third period to make the score 5-2. This goal came off a turnover by de Haan. Luke Kunin was parked on the doorstep all alone; there wasn’t a white sweater in the neighborhood other than Lankinen. Keith lost an edge and went down about 20 feet away from Kunin, leaving him wide open for the Preds’ fifth goal.

Instead of using his timeout to calm the team down, Colliton pulled Lankinen in favor of Malcolm Subban.

Because it was Lankinen’s fault the four senior defensemen on the roster shit the bed in front of him.

Because changing goaltenders once you’re down three in the third period is going to motivate the team.

Because Subban was going to score four goals to lead an epic comeback. By himself.

To be clear: Lankinen as not having his best night. But to have this be the first time all year Colliton makes an in-game change in net is ridiculous.

How did the skaters respond?

A little more than five minutes after the goaltending change, Suter went to the box for four minutes after a high stick did enough damage to warrant a second minor penalty.

Dallas defeated Detroit in a shootout, moving the Stars one point in front of the Blackhawks pending the result of Chicago’s game in Nashville (which didn’t look promising).

There was little/no emotion from the Blackhawks until around three minutes left in regulation. Keith crosschecked Duchene two or three times in the corner and Nick Cousins took exception. He came flying in to throw hands with Keith. The teams exchanged kind words for a few moments and… DeBrincat was the only skater sent to the box. So with 3:40 left in regulation and Chicago down three, they would be short-handed for two minutes.

The Hawks killed the penalty (Nashville didn’t put much pressure on) but they lost the game by three.

Gaudette put a shot on net with ten seconds left in regulation and a few more kind words were exchanged behind the play. Cousins received an early trip to the showers for his efforts before the final horn.

Lankinen stopped 17 of 22. Subban was perfect, coming in with the game out of reach and his teammates showing zero pushback.

Will Colliton change the lineup for the next matchup? Will Kalynuk be available? Will it matter?

If Chicago wants the playoffs, they need to be a helluva lot better than they were on Monday night. That includes the coaches.

79 thoughts on “Blackhawks Blown Out In Nashville, Playoff Chances Sliding Away”