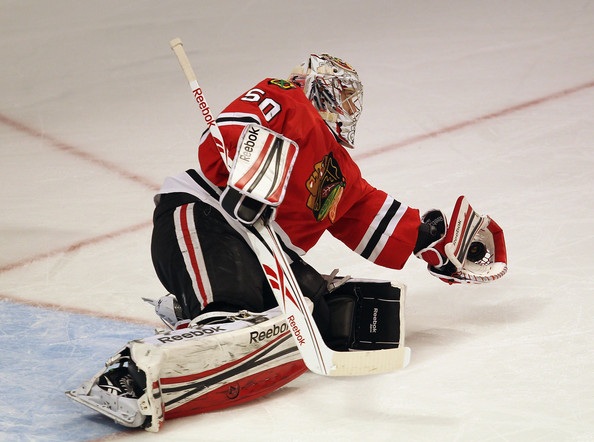 The Blackhawks welcomed the Sabres to the United Center for their first meaningful home game of the 2014-15 season, and handled their business with authority in a runaway victory.

Chicago’s second line stole the show, starting less than one minute into the contest. Andrew Shaw was credited with his first goal of the season, tipping a Niklas Hjalmarsson shot past Jhonas Enroth. At 2:52, Duncan Keith scored his second goal of the season and the Hawks appeared to be well on their way to a devastating win over the young visitors.

But Buffalo didn’t go away. Zemgus Girgensons got the Sabres on the board at 7:17, and Tyler Ennis scored a short-handed goal at 18:40 to tie the game.

The score would stay tied through the second period in spite of Enroth struggling to control anything. He left dozens of rebounds in front of the net, but the Hawks weren’t able to capitalize more than twice in spite of 28 shots getting on net through 40 minutes.

In the third period, the dominant Hawks that scored twice in the first three minutes played a complete period, and put the nails in the coffin.

Patrick Kane scored the game-winner at 5:58 (see video above), and the Hawks started to own the puck. Marian Hossa scored a short-handed goal, the 30th of his career, at 10:03 and appeared to break the spirits of the Sabres.

For good measure, the Hawks would get a power play goal from Patrick Sharp and Daniel Carcillo scored his first of the season at 17:23 to close the scoring.

Sharp led the team with seven shots on net and Jonathan Toews had two assists while winning 13 of 21 at the dot.

On the blue line, coach Joel Quenneville was more committed to keeping Trevor vanRiemsdyk with Hjalmarsson and David Rundblad with Johnny Oduya. TvR skated 14:01 in the game and Rundblad played 11:34, while Oduya was limited to only 16:22 in the game. Keith skated 27:25 and Brent Seabrook played 23:32 as the only Hawks skaters to go over 20 minutes in the game; Hjalmarsson finished the game with 19:58 on the ice.

Chicago put 47 shots on net in the game, including 19 in the third period. Corey Crawford stopped 21 of 23 in the victory, the 117th of his career. The win moves Crawford past Murray Bannerman into fifth in franchise history in victories; he is 20 behind Jocelyn Thibault for fourth on the organization’s all-time leader board.