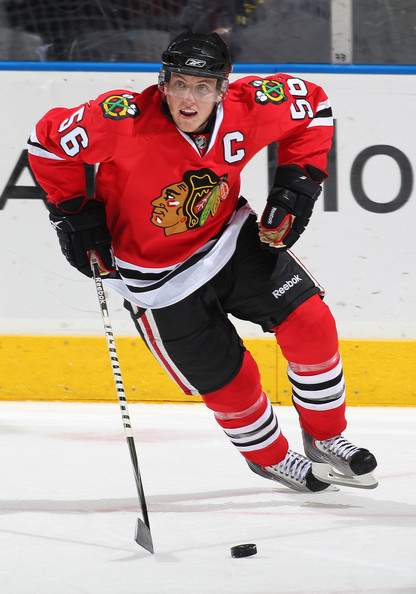 With respect to full disclosure, this is a second attempt at this piece. The article started discussing the future of top prospect Nick Leddy, but when I was alerted to the article on NBC 5’s Blackhawks blog on the same topic (that does an outstanding job of making the case I was putting into words), the best course of action became clear.

Read the Madhouse Enforcer‘s article. You could also read my article from when Leddy was demoted in October.

Here are my current, mid-season thoughts on Leddy.

If the Blackhawks decide to send Leddy back to Rockford and extend his contract for another season, which is the most responsible move long-term for the organization, they still absolutely need to improve their bottom pair.

We’ve seen what Jassen Cullimore and Nick Boynton bring to the table for most of this season, and have seen glimpses of Jordan Hendry over the last couple seasons. None of those three will likely be in Chicago after this season, and the best of the three in my eyes has been (gulp) Cullimore. But because he signed a two-way deal, he has the most flexibility with his contract and, thus, is currently in Rockford.

Perhaps the Hawks should consider another, cheaper option who is not only more NHL-ready than Leddy, but who has also earned a call-up.

Brian Connelly might need to get a look at the United Center.

Connelly, who was selected to play in the AHL All Star Game earlier this week, is having an outstanding season this year. He has 24 points (four goals, 20 assists) in 26 games in Rockford, well on his way to the best season of his professional career. His NHL cap number ($875k) is over $300k less than Leddy’s, and he’s five years older than the young phenom.

Thinking longer-term, the Hawks also need to know what, if anything, they have in Connelly as an NHL prospect. With Leddy, Dylan Olsen and Shawn Lalonde maturing in Rockford, there could come a time (soon) that Connelly is eclipsed in the organization by younger prospects. The Hawks also have at least a fair idea of what Ivan Vishnevskiy brings to the table; he’s been in the NHL before.

As fans are seeing now with Jack Skille, sitting on a productive top prospect too long and burning any potential trade value leaves the organization with the harder decision of cutting bait and admitting they messed up. Skille, however, had chances along the way to show the Blackhawks what he could do in the NHL along the way; Connelly is still waiting for his first taste of the big time.