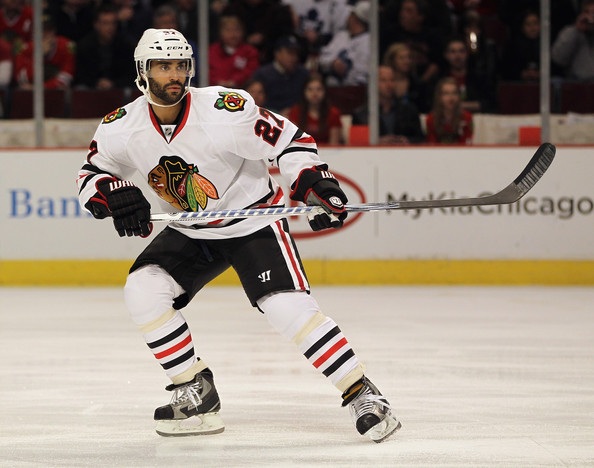 Last spring, a poor series against Phoenix put Johnny Oduya in the doghouse with many Blackhawks fans.

But 12 months later, Oduya is having a fantastic start to the postseason next to Michal Rozsival, and the Hawks’ “third” defensive pair is a big reason Chicago keeps rolling.

Since winning the Stanley Cup in 2010, many have raised concern over the amount of ice time being given to Duncan Keith and Brent Seabrook; Keith’s average ice time climbed to almost 27 minutes in each of the last two seasons. With Oduya returning and the addition of Rozsival this year, hopes were that ice time for the Hawks’ top pair would be cut back.

When coach Joel Quenneville mixed up the blue line during the regular season, he moved Oduya “down” to the “third” pair with Rozsival. Those two have been arguably the best pair for the Hawks against Minnesota and now Detroit, and they have allowed Quenneville to comfortably roll six defensemen on a nightly basis.

Four defensemen – Keith, Seabrook, Hjalmarsson and Oduya – are averaging at least two minutes per game short-handed in the postseason as well; Chicago has yet to allow a postseason powerplay goal.

Through six playoff games, Oduya leads the Hawks with 12 blocked shots and seven takeaways. Rozsival, meanwhile, has 10 blocked shots and 13 hits. Oduya and Rozsival are plus-six and plus-five, respectively, and Oduya has added two goals and an assist.

Against Minnesota, Rozsival (91:48) and Oduya (88:56) led all Blackhawks skaters in 5-on-5 ice time, but the Wild scored only twice while either was on the ice; Chicago scored six even strength goals with either Rozsival or Oduya on the ice.

The reality for Hawks’ opponents is that there isn’t a “third” pair on the blue line for Quenneville. And that depth is giving the Hawks a significant advantage.