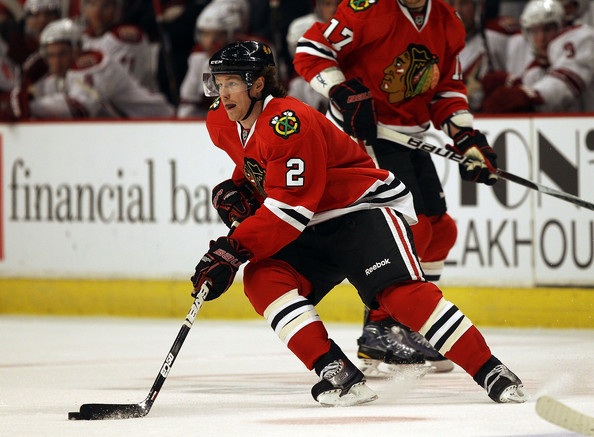 The competition for ice time as a defenseman at any level of the Chicago Blackhawks organization will be fierce when the 2014-15 season begins.

At the NHL level, the Chicago Blackhawks already have seven defensemen under contract for next season. Duncan Keith and Brent Seabrook would figure to be back together to open the season, with Niklas Hjalmarsson a lock for the opening night roster as well. After those three are Johnny Oduya, Nick Leddy, Michal Rozsival and David Rundblad, all of whom are in the final year of their respective contracts.

Given the Blackhawks’ current relationship with the salary cap (they’re over it), this being a position of depth figures to play into future transactions made by GM Stan Bowman to cut dollars.

On Wednesday, the Blackhawks announced the signing of veteran defenseman Kyle Cumiskey, and the IceHogs announced an AHL deal with Zach Miskovic.

If the Hawks look to make a move, the older two defensemen they could potentially move – Oduya and Rozsival – both have modified no trade clauses on their current contracts. (Reminder: Brian Campbell had a NTC. Most players, when asked, will waive it once they know they aren’t wanted any longer.)

Here are the cap hits associated with the one remaining year for the four defensemen on the Hawks’ NHL roster:

The Blackhawks need to cut approximately $2.5-3.0M off their current cap number to be compliant before the regular season begins.