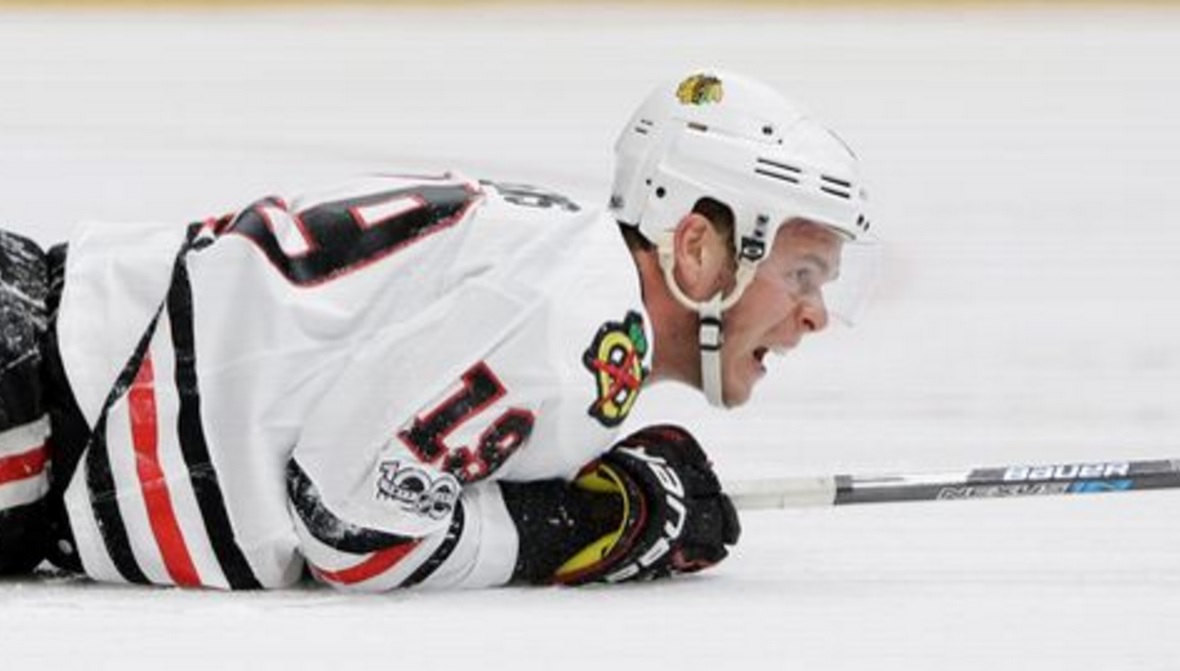 In the first two games of the series, Nashville came out and scored in the opening period. The script was working, so the Preds didn’t deviate on home ice.

Nashville out-shot the Hawks 18-9 in the first period and owned the second half of the period. But there was one massive difference between this game and its two predecessors.

Chicago almost got on the board in the least conventional way possible. While killing a Marcus Kruger penalty in the middle of the first, a Johnny Oduya clear bounced off a stanchion and directed right at the net which had been vacated by Pekka Rinne. Rinne dove back in front of the net and got just enough of a piece to keep Chicago off the board.

Corey Crawford did terrific work in the first to keep the game tied at zero, and as the game got more physical in the second period the skaters in front of him were able to take advantage.

Dennis Rasmussen – of course – scored the first Blackhawks goal of the series 65 seconds into the second period.

The great setup came from Kruger after a strong play by Richard Panik in the corner; a line combination that coach Joel Quenneville put together was working well in the second period.

Ten minutes later, Ryan Ellis went to the box for delay of game and Chicago took advantage of a power play – finally.

The goal is the 50th career postseason goal for Kane and gave the Hawks a much-needed two-goal lead.

The lively glass that almost caught Rinne in the first period got the Hawks early in the third. A shot was tipped high by Crawford and bounced hard off the glass, coming all the way back in front of the net. The puck found Filip Forsberg on the doorstep and he easily tapped home the Preds’ first goal of the game, cutting Chicago’s lead in half 4:24 into the third.

As the third period progressed, the Preds took turns taking shots at Jonathan Toews. PK Subban horse-collared him 50 feet away from the puck right in front of an official – no call. Later, on a puck frozen by Rinne, Roman Josi cross-checked him to the ice – no call.

With six minutes left in regulation, another loose rebound found the stick of Forsberg in front of the net and he tied the game. Crawford had crept away from this crease and was run into by Viktor Arvidsson as the shot was released by Forsberg. There was obvious contact with Crawford’s head on the play, but he was outside the blue paint. Quenneville challenged that there was interference on the play, but the review quickly confirmed the game was tied.

NHL Rule 69 on goaltender interference states a goal can stand if incidental contact outside crease comes with reasonable effort to avoid. pic.twitter.com/JO7fu0j8yJ

The league’s official release clarifying the ruling didn’t say anything.

At the time of Forsberg’s goal, shots were 11-6 favoring Nashville in the third period.

The two teams each had chances – and Nashville continued to get away with murder – but neither team scored over the final 5:52 and the game headed to overtime.

Earlier in the night, both Eastern Conference playoff games went to overtime; Chicago and Nashville were simply following suit. The late game between Calgary and Anaheim also went to overtime. Hashtag tv ratings.

Through 60 minutes, Nashville was out-shooting Chicago 40-31 and both of Forsberg’s goals came off incredibly fortunate bounces. Kane had eight of Chicago’s 31 shots; Toews had won 12 of 24 at the dot. Kruger won only one of his first 11 faceoffs, but won a number of key defensive zone draws in the third period. He won five of 17 faceoffs during regulation. Tanner Kero won six of ten.

Only 44 seconds into overtime, Subban and Hossa went off for matching minors, giving us 4-on-4 action. Neither team capitalized on the 4-on-4 and overtime continued at even strength.

Fiala got another look with 3:16 left in overtime and wouldn’t be denied a third time. He deposited the game-winner and sent the Hawks to their dressing room looking at a 3-0 series deficit.

129 thoughts on “Blackhawks On The Brink After OT Loss”