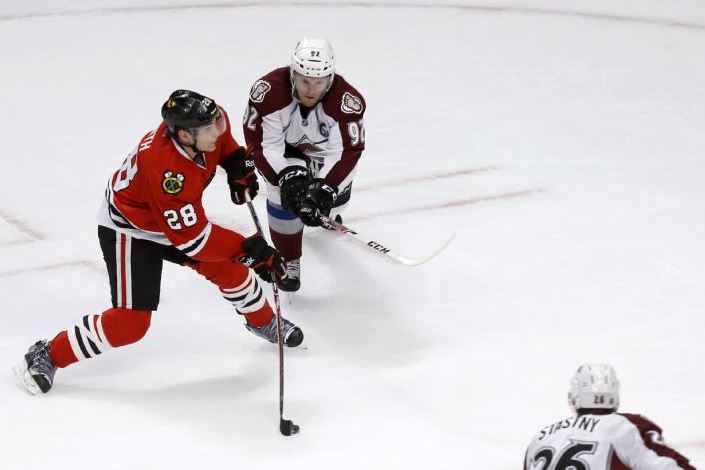 With the trade deadline less than 24 hours away, the Blackhawks dropped an important divisional game against the Colorado Avalanche 4-2 at the United Center on Tuesday night.

Jonathan Toews led all Blackhawks forwards, skating 21:13 in the loss. He scored a power play goal to tie the game at two in the third period, his 22nd of the season, and won 10 of 19 faceoffs.

Ben Smith scored the first goal for the Blackhawks, his eighth of the season coming late in the second period and tying the game at one. Smith was involved in five faceoffs, winning three, in 13:20 in the game. His five faceoffs were the third-highest total on the Chicago roster in the game.

Michal Handzus, back on the second line, won only five of 15 draws. He remained with Marcus Kruger on the Hawks’ top penalty kill line and Smith played in the place of Marian Hossa – primarily with Toews – while the Hawks were short-handed. Chicago allowed one power play goal, the game-winner to Tyson Barrie in the third period, in three penalty kills.

Corey Crawford, still wearing his Stadium Series pads because his regular equipment is still missing, stopped 17 of 20 shots. Semyon Varlamov stopped 36 of 38 in the victory.

Maxime Talbot, Ryan O’Reilly and Paul Stastny also scored for Colorado, who have won seven of ten and three in a row.

Also on Tuesday night, the Blues defeated the Lightning 4-2 to pull two points in front of the Hawks for the top spot in the Western Conference. St. Louis still has two games in-hand on Chicago. With the victory, Colorado pulled to within one point of the Hawks in the standing and the Avs have one game in-hand.

48 thoughts on “Blackhawks Buried By Avalanche”