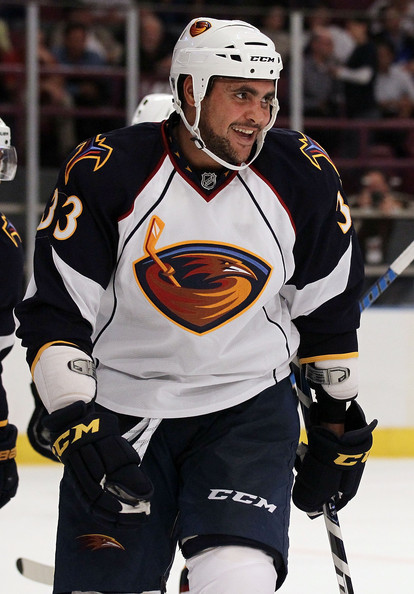 In case you haven’t heard by now, Dustin Byfuglien is having an incredible season.

Serving as an alternate captain for the Atlanta Thrashers, Byfuglien leads the entire NHL with five game-winning goals as December begins. Indeed, his 27 points and 10 goals are the most by a defenseman, and only four players – including Byfuglien’s teammate Tobias Enstrom – have more than his 17 assists. He is also plus-five so far on the new year.

As Byfuglien takes his dominating season around the NHL, fans and media members have taken their shots at the defending champions for trading Byfuglien. Last night, Adrian Dater of the Denver Post tweeted, “Chicago Blackhawks: what idiots you were giving up Dustin Byfuglien.” When he was pressed to make sense of the cap, his responses were, “They should have found a way,” and “It was an idiotic decision. That is all.”

Dater isn’t alone, though. Media members who refuse to live in the real world continue to blast the Blackhawks for the decision, and fans are taking more shots at Chicago than perhaps ever before.

However, reality indicates that the Blackhawks had to trade Byfuglien when they did, and received very good value for him.

First, let’s remember the actual trade that took place. On June 23, the Blackhawks sent Byfuglien, Ben Eager, Brent Sopel and prospect Akim Aliu to the Atlanta Thrashers for veteran forward Marty Reasoner, prospects Jeremy Morin and Joey Crabb, and first and second round draft choices; the two draft picks were the selections the Thrashers received from New Jersey in the Ilya Kovalchuk trade.

The day after the trade, we evaluated the value the Blackhawks received. Looking at the summer trade that sent Nathan Horton (also off to an outstanding start) to Boston, and the careers of both Horton and Byfuglien to date, the Blackhawks appeared to do very well in the trade from the perspective of return.

However, nobody wants to talk about the value the Blackhawks received in the trade. The fact that Morin projects as an outstanding, top-six forward at the NHL level doesn’t matter. The Blackhawks clearly failed when they didn’t “just find a way” to keep Byfuglien around.

So here is a one-gallon serving of reality.

Assuming Byfuglien would put up the same 27 points in 25 games with the Chicago Blackhawks is both naive and reckless. Not only did the Blackhawks have to trade Byfuglien last summer, but they made the future of the organization stronger by moving him.

Choke that statement down. Yes, the Blackhawks future is better because they traded Byfuglien.

First of all, right or wrong, the Blackhawks organization valued Byfuglien as a forward. He spent most of his time as a third or fourth line power forward who, if we all remember 12 months ago, lost his spot on the team’s top line with Jonathan Toews and Patrick Kane to Troy Brouwer. His career highs at the time of the trade were 19 goals and 17 assists; he had never posted more than 36 points in a season and was minus-15 in three NHL seasons in Chicago.

The assertion that “we knew he was this good by watching the postseason” is also misleading. Byfuglien had a strong playoff run in the spring of 2009 as well, and it never translated to the 2009-10 regular season. His play was inconsistent and his scoring was sporadic.

This reality exposes the first flaw in the “Blackhawks should have kept Byfuglien” argument. Byfuglien is playing the blue line in Atlanta. If he was still in Chicago, he wouldn’t even be playing the same position that he is now.

For those that argue that the Hawks should have kept Byfuglien at forward, that discussion has already happenend. The choice this summer was between keeping Byfuglien and Patrick Sharp. We discussed that at length before Byfuglien was dealt.

But let’s continue to dialogue. Let’s take it to the next step and answer the next argument: “the Blackhawks should have left Byfuglien on defense.”

Bandwagon fans and people outside of Chicago that don’t pay attention only point to the last month of the 2009-10 season and make the point that Byfuglien should have always been a defenseman. The fact that Byfuglien may have always wanted to play the blue line is one argument, but let’s look back to when the Hawks moved him.

The Blackhawks had two young, physical defenseman on the roster in 2007-08. Each would receive a three-year deal from then-GM Dale Tallon for roughly $3M per season. However, the organization had a fair amount of depth on the blue line and made a choice to move one of the two to forward. Byfuglien was moved up, and Cam Barker was left on defense.

Before the argument begins that Barker’s a miserable player, here’s another brief dose of reality: Barker’s career high in points (40) is higher than Byfuglien’s career best.

However, we cannot avoid the issues Barker has, and Blackhawks fans can be thankful for the trade GM Stan Bowman made during last year, sending Barker to Minnesota for Kim Johnsson and prospect Nick Leddy.

The reminder of how mediocre Barker was (and is), and the fact that the Blackhawks valued Byfuglien more as a forward is important. So is placing Byfuglien’s role in Atlanta into proper perspective in relation to the current group of Blackhawks defensemen.

Byfuglien is playing an average of 21:36 per game this year, which ranks fourth among Atlanta defenseman. He is one of their primary players on the blue line, so to make an appropriate comparison we would have to replace one of the Hawks’ top four defenseman with Byfuglien. Which of the Blackhawks defenseman would you be willing to replace with Byfuglien? And, more importantly, which could you have moved?

Keith’s wing man, Brent Seabrook? Again, no chance. He might not give you 50 points, but he’s playing well enough to merit his own Norris consideration this year.

Brian Campbell? If you find a general manager in the NHL willing to take his contract, please forward that information to Rocky Wirtz because you’ll have a job waiting for you in Bowman’s office. Not only does Campbell make entirely too much money for a trade to happen in reality, but his value on the ice is understated. He is an outstanding puck-moving defenseman, and the glaring holes in the Hawks defense while he was out in October illustrated how much the Hawks need him (at least until Leddy’s ready).

Here’s where the argument turns from common sense argument to emotional fighting. Hjalmarsson received an offer sheet from the San Jose Sharks that was matched by the Blackhawks this summer for a new four-year, $14M contract. Fans and short-sighted media alike have pointed to the $500k salary difference between the two and instantly argued that the Blackhawks made the wrong decision in paying Hjalmarsson, who has 25 fewer points this year than Byfuglien.

That school of thought is wrong. But, for the sake of argument, let’s walk down that path for a bit. Let’s make the straight-up swap of Byfuglien for Hjalmarsson on the current Blackhawks roster. Let’s also fast-forward to July 1, 2011.

In this scenario, the Blackhawks would spend this season deciding between two big, physical defensemen. Both Byfuglien and Seabrook will be restricted free agents next summer, and the Blackhawks salary cap situation is such that the Hawks would have to choose between the two. [Also note that Brouwer and Jack Skille are among other RFAs next summer.]

If Byfuglien, with a career-high of 36 points, is already making $3M per, how much is he going to be worth as a free agent? Indeed, if Hjalmarsson is worth an offer sheet at $3.5M per, how much does that raise the ceiling for Byfuglien’s next contract?

So the Blackhawks would choose between Seabrook and Byfuglien, and the other would be gone. That would leave the Hawks with Keith, Campbell and one of Seabrook/Byfuglien heading into 2011-12. If you thought needing players like Jordan Hendry and Nick Boynton around at $500k was frustrating, consider a full season of 18 minutes per night from one of them like we saw from Boynton in October this season.

Byfuglien stands to see his salary jump to the $5M neighborhood is he continues this way. By signing Hjalmarsson for the next four years, the Hawks actually have a veteran defenseman locked up for three of those seasons for roughly $1.5M cheaper than it would have cost to keep Byfuglien. And they will be able to afford Seabrook.

Trading Byfuglien is the difference between keeping the Hawks having an elite top four versus an expensive top three for the next few years. Oh, and Hjalmarsson is still only 23, two years younger than Byfuglien.

So while Hjalmarsson has been a disappointment this year, assuming his salary could have kept Byfuglien in Chicago isn’t realistic.

The final argument people make is that the Hawks should have found a way to make it work for one more season and then could have traded Byfuglien next summer.

The value for Byfuglien was at it’s all-time peak this past summer. He had one full season left on his current contract, was coming off a huge playoff performance, and his value to an organization off the ice was (and continues to be) enormous.

Having a full season of Byfuglien at $3M is enormous. If the scenario played out that the Hawks had to choose between Seabrook and Byfuglien, simple economics tells us that teams would try to short the Hawks on value in any trade because the Blackhawks actually had to move one of them. We’ll ask the rhetorical question again: if the Sharks are going to give Hjalmarsson an offer sheet for $3.5M, how many teams would line up to land either Seabrook or Byfuglien in the same fashion? For perspective, let’s put this hypothetical scenario out there. Let’s say the Blackhawks kept Byfuglien through the year, and a team gave him an offer sheet at $5M per season. The compensation the Blackhawks would receive from the team making that offer would be 1st, 2nd and3rd round picks.

This summer, the Blackhawks received a 1st and 2nd in the trade for Byfuglien… so is Morin worth a 3rd round pick?

Reality is that the Blackhawks received better value in the trade with Atlanta than they would have if they kept Byfuglien and let him walk to an offer sheet.

Does it hurt when a former player does well somewhere else? Absolutely. Blackhawks fans watched Jeremy Roenick have a great post-Chicago career, and watched former players like Denis Savard, Steve Larmer and Chris Chelios raise the Cup fairly quickly after leaving town.

The Blackhawks had to move Byfuglien to preserve the potential for the organization to compete for another Stanley Cup for the next decade.

So let’s celebrate Byfuglien’s history in Chicago and his contributions to the Cup victory, and applaud his success in Atlanta. Let’s also give credit somewhere else: Atlanta management had the “intestinal fortitude” to move Byfuglien back to defense and give him big minutes, and it’s paying off. But also be mindful of the realities of the salary cap world.

5 thoughts on “Blackhawks Bust? Why Trading Dustin Byfuglien Was Necessary”