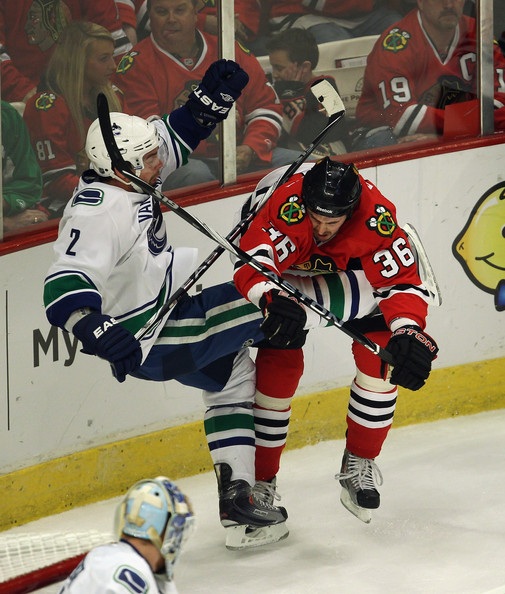 The Canucks admittedly played their best game of the series in Chicago on Sunday night, and lost. The Blackhawks had a solid game, but a number of players weren’t their best. But there are a few numbers that stick out on the stat sheet at the end of the night.

Ben Smith will be remembered for scoring the game-winning goal, but his entire stat line was fantastic in the game. Every shift, number 57 was noticeable. His hustle stuck out and he won a lot of board battles. He was credited with two blocked shots and three hits in 25 shifts on the night.

Jonathan Toews has struggled to score, which isn’t news. But he was quietly great on Sunday night. He won 17 of 31 faceoffs, most of which were against Ryan Kesler, was credited with one blocked shot, four hits and five takeaways. There’s more to hockey than goals, and Toews is doing everything in this series well except finishing at the net.

Brian Campbell and Chris Campoli played games they would probably like to forget. Campbell’s footwork was poor, his passing was mediocre, and he lost almost all of his board battles. Meanwhile, Campoli whiffed on a clearing attempt that led to Vancouver’s second goal and has struggled to control the puck in the series. However, the two combined to block 11 shots on the night – six for Campbell, five for Campoli – as the Hawks blocked 31 shots as a team.

Michael Frolik was great all night, as he has been in most of the series. He tied the game with the first postseason penalty shot conversion in Blackhawks history, and his energy was eye-popping all night. He was credited with one takeaway in the game and four blocked shots.

Corey Crawford continues to impress in his first postseason series. He faced 35 shots in the game Sunday night, 12 of which came during a furious overtime period in which he had to bail out his teammates on a number of occasions, and he kept the Hawks in a game that, at times, they weren’t controlling.

7 thoughts on “Blackhawks-Canucks: Inside The Numbers from Game Six”