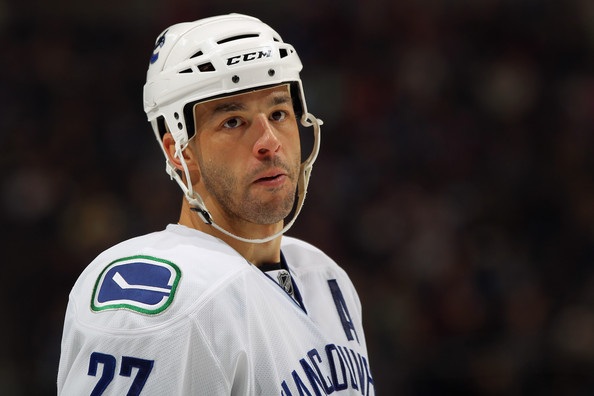 When the Blackhawks and Canucks drop the puck on Wednesday night, one of the critical storylines will be who is – and isn’t – at the dot when the puck hits the ice.

After a second consecutive exit from the playoffs at the hands of the Blackhawks, the Canucks decided to add depth to their center position and blue line. To do this, they decided to dump two of their top four centers and upgrade with veteran Manny Malhotra.

The move worked, and Malhotra had a fantastic season for the Canucks. He took 1,261 faceoffs this year, third on the Canucks behind Ryan Kesler and Henrik Sedin, and won an astounding 61.7 percent of them.

In many ways, Malhotra filled the role on the Canucks that Dave Bolland did for the Hawks in last year’s postseason. He has been a great two-way center on the third line for the Canucks, and their special teams have improved because of his presence.

Malhotra and Kesler combined to take 83 percent of the Canucks’ short-handed faceoffs this year (Kesler took six more than Malhotra over the entire season), and they combined to win 56.5 percent of their short-handed draws. With these two centering their penalty kill unit, the Canucks improved from 18th in the NHL last year (81.6 percent) to third this year (85.6 percent).

The Canucks wanted Malhotra’s skills on the ice against Chicago so specifically, he actually took more than one-third of the total faceoffs in the four games between the Canucks and Blackhawks this year, winning 63 percent (51 of 81). In face, over the four games between these two teams, there were 240 total faceoffs and only three Canucks took more than 10: Malhotra, Kesler and Henrik Sedin.

Unfortunately for Vancouver, Malhotra is not available in the playoffs. After an awful injury late in the regular season, he has been lost for the rest of this season and fans of very team are praying he can return to the ice next year.

On the other end of the ice, a name not many national media members care about could make all the difference for the Blackhawks.

Last year, Ryan Johnson took 537 faceoffs as a member of the Vancouver Canucks, winning 52.7 percent. But when the Canucks let him go, Johnson struggled to find a new gig. It wasn’t until the season had already started that he finally found work – in Chicago.

Early in the season, Johnson struggled to get on the ice in Chicago while Jonathan Toews, Patrick Sharp, Dave Bolland and Jake Dowell were taking most of the faceoffs. But as injuries took Bolland out of the lineup and the coaches decided to move Sharp to wing full-time, a spot opened for Johnson to join the lineup.

In the second half of the season, Johnson has been fantastic. He’s won 63.2 percent of his faceoffs since the All-Star Break, and his mere presence on the ice has allowed Joel Quenneville to leave Sharp and Tomas Kopecky at wing.

Johnson has emerged as a legitimate defensive ace; the Blackhawks have only allowed 13 even-strength goals in over 302 minutes of ice time from Johnson (or one goal per 23:17). By comparison, Toews’ average is 24:39, and he is among the league leaders in plus-minus.

Indeed, Johnson has been good enough – especially lately – that whether or not Bolland returns to the lineup for the entire first round series against Vancouver is, in many respects, a luxury. In the wake of the trade deadline, when the Hawks acquired Michael Frolik from Florida, coach Joel Quenneville suddenly has almost too many options at center.

If Quenneville wanted to have two players on the ice that are comfortable taking a faceoff, he could do it on three lines without Bolland coming back.

Considering the history between the two teams, there is no doubt that special teams will play a major role in the series. With Malhotra missing and Johnson getting more comfortable, the Blackhawks may have a major advantage at center.

One thought on “Blackhawks-Canucks Preview: Centers of Attention”