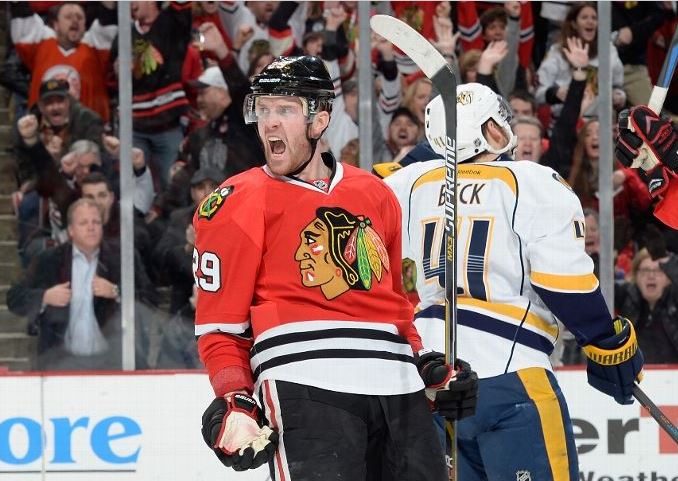 In a battle for first place, it took extra hockey for the Blackhawks and Predators to settle their final regular season match-up of the season. The Hawks dug a three-goal hole in the opening 28 minutes, allowing two goals in the first period and a third in the opening eight minutes of the second. Roman Josi, Craig Smith and James Neal accounted for the first three Nashville scored on the night, with Colin Wilson picking up two assists before the Hawks were able to solve Pekka Rinne.

But over a stretch of 7:10 the Hawks stormed back to tie the game. Brad Richards returned to the lineup and scored as a power play expired to get Chicago on the board. Andrew Shaw scored his first goal since Nov. 28 and Marian Hossa followed with a power play goal to tie the game.

Unfortunately, the tie lasted only 81 seconds as James Neal was able to score his second of the game (this time without assistance from Oduya) to give Nashville a 4-3 lead heading to the third period.

In the middle of the second period, Eric Nystrom hammered Niklas Hjalmarsson behind the Hawks’ net. He was slow to get up and went to the dressing room, but returned to the ice later in the period.

Bryan Bickell scored his fifth of the season with 73 seconds remaining in regulation to extend the game to overtime. Bickell skated 9:42 in the game and was credited with an assist and one hit to go with his goal. He successfully doubled his point total for the rest of December in one evening – the final game of the 2014 calendar year – and posted his first multi-point game since Oct. 21.

Corey Crawford overcame a rough first period (in which he faced 18 shots) to settle in and eventually win the game in the shootout. He made 36 saves in the win. Rinne faced 42 shots on the other end of the ice, stopping 38 in 65 minutes but wasn’t able to keep Jonathan Toews’ shot out of the net in the skills competition.

Daniel Carcillo skated seven shifts and 5:03 in the game.

Duncan Keith picked up three assists, two blocked shots and a team-leading three takeaways, while Oduya led the team with three blocked shots (and one own-goal). Kris Versteeg had a team-high three hits in the game.

Chicago’s next game will be on January 1, 2015 in the Winter Classic. The Hawks finish the calendar year in first place.