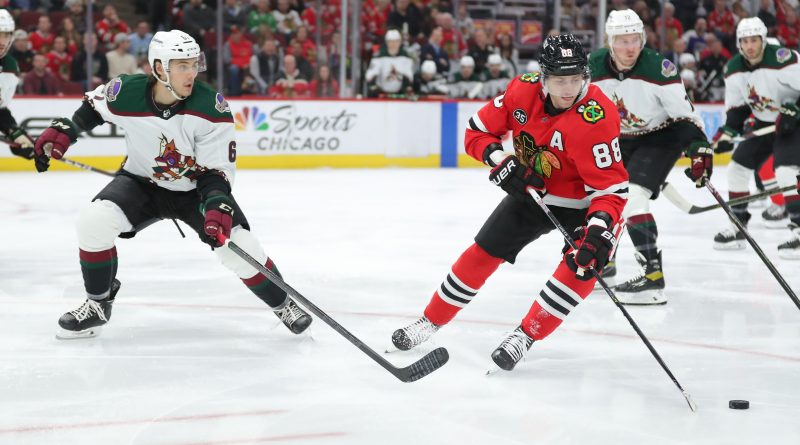 Sunday was a significant night for a few reasons for the Chicago Blackhawks organization. Sadly, none of the significant came from the game being played against another bottom feeding team, the Arizona Coyotes.

Before the game began, the Blackhawks celebrated Jonathan Toews reaching 1,000 regular season games played on the recent trip to Florida. There were a few great old faces in the building for the ceremony and in the suite enjoying the game.

Even though the Blackhawks made an effort to start Tyler Johnson in his return to Tampa and both Henrik Borgstrom and Riley Stillman in their returns to Florida against their former employers, for Sunday night’s game coach Derek King sent out Dominik Kubalik and Sam Lafferty with Toews for the start of the game. With Stillman and Erik Gustafsson on the blue line. Apparently at least giving him the first shift of the night with someone like Patrick Kane was too much to ask.

Anyways, the Blackhawks scored the only goal in the first period. Alex DeBrincat set up Dylan Strome, who reached the 20-goal plateau on the year.

Strome’s goal came only 75 seconds into the game.

Chicago held an 11-6 shot advantage after 20 minutes and a 1-0 lead on the scoreboard.

Between the first and second periods, the Hawks announced that Chris Vosters has officially been named the play-by-play replacement for Pat Foley.

The second period was a debacle, as many second periods have been this year. Arizona out-shot the Blackhawks 15-5 in the middle stanza. Michael Carcone and Travis Boyd scored to give the Yotes a 2-1 lead after 40 minutes of play.

Mind you, the Coyotes came in dead last in the NHL in shots on goal per game at only 25.7 per game — three per game fewer than the 31st-ranked Blackhawks. So Arizona putting 15 shots on net in a single period isn’t ideal.

Chicago was 0-for-2 on the power play in the first two periods but got a third opportunity early in the third period when Kyle Capobianco went to the box. The Hawks made them pay this time, and it was Kane ripping home his 22nd of the season.

DeBrincat picked up his second assist on Kane’s goal. Seth Jones established a new career-high with his 42nd assist on the season as well.

After a couple flurries on both ends of the ice, you could hear someone on the ice bark at Caleb Jones to “just hold it” behind the Hawks’ net for the final 10 seconds of regulation. So everyone stood and looked at each other as the clock rolled to zero and we headed to overtime.

In regulation, Toews won 15 of 19 faceoffs. Strome won eight of 14 with his goal and five shots on net. Kane was credited with a team-leading six shots on net before the start of OT.

Kevin Lankinen made three incredible saves with about 60 seconds left in overtime and he made a couple more on a subsequent rush. Phil Kessel missed a wide open cage as well. Kane was stuck out on the ice for a marathon shift and ended up heading to the box after another huge save from Lankinen with 47.5 seconds left on the clock.

Of course the game would then end with a pass attempt hitting the skate of a Chicago player and redirecting perfectly into the net with 14 seconds left. And the Arizona Coyotes — who came into the game dead last in the NHL with 47 points in 68 games — left with a win.

33 thoughts on “Blackhawks Celebrate Jonathan Toews, Lose at Home to the Worst Team in the NHL”