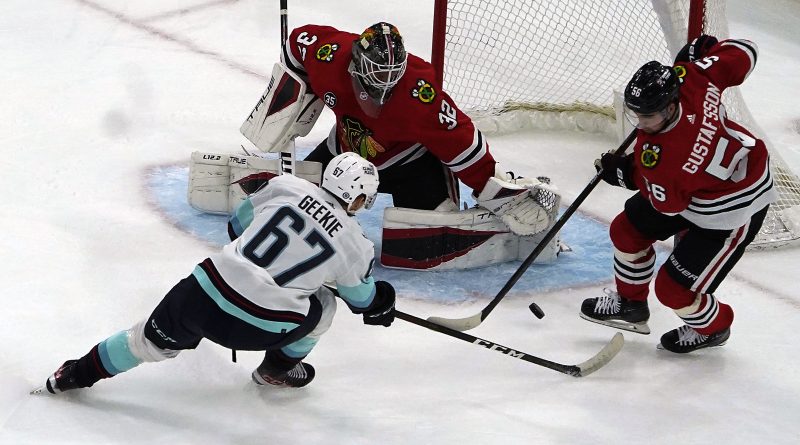 The Blackhawks hosted the Seattle Kraken on Thursday night. Lukas Reichel returned to the NHL lineup and Alex Vlasic actually got to dress.

Seattle entered the game 17 points behind San Jose in dead last place in the Pacific Division. And they lost in St. Louis on Wednesday night.

Of course Seattle out-shot the Blackhawks 17-3 in the first period.

Yeah, there was a lot of excitement around Marian Hossa’s retirement and the announcement in the middle of the first period that the Hawks will retire his number next season, but the Blackhawks absolutely crapped the bed in the opening 20 minutes. It was absolutely pathetic.

One would assume head coach Derek King chewed out everyone but Kevin Lankinen after their “effort” in the first period. How did the Blackhawks answer the bell to start the second period?

Alex Wennberg scored 47 seconds into the second period to give the Kraken a 1-0 lead.

After the Wennberg goal the Hawks started to settle down and show more offensive push (“more” is easy to say when they didn’t generate a damn thing in the first period). Unfortunately for Seattle, Vince Dunn’s skates got twisted with Sam Lafferty’s and he went into the boards hard and awkwardly in the middle of the period. He left the ice with assistance and without putting any weight on his right leg.

The Blackhawks got a golden chance late in the second. With four minutes left, Ryan Donato went to the box for interfering with Taylor Raddysh. Immediately off the faceoff to start the power play, Carson Soucy caught Raddysh with a high stick and picked up a double-minor, giving the Hawks 1:55 of 5-on-3 action with two more minutes of advantage to follow.

So how did the trailing Blackhawks use their two-man advantage? Mostly watching Patrick Kane and Seth Jones pass the puck back and forth and then chasing the cleared puck on the other end of the rink. They did nothing with a two-man advantage. Zero. Nada. Zilch.

The 1:55 of power play time the Blackhawks had after the 5-on-3 expired was also an ugly waste of time that saw no shots on net and the second period ended with a thud.

Chicago out-shot Seattle 15-6 in the second period, but the shot volume covered up an otherwise mediocre period. The power play(s) at the end of the period were about as bad as possible; at least they didn’t give up a short-handed goal. And they heard it from the fans in attendance.

Dunn returned to start the third period for Seattle. And the Kraken went to work again. Dominik Kubalik went to the box less than 50 seconds into the third period, giving the visitors their first power play of the night. Seattle’s special teams are bad, so they didn’t score.

The Hawks were apparently waiting for the skaters who had failed to complete a short pass all night to successfully keep the puck in the offensive zone to pull Lankinen for an extra attacker. But those grenades ultimately went the other way and Jordan Eberle scored with 99 seconds left in regulation to give the Kraken a 2-0 lead.

Lankinen was able to get off the ice after the following faceoff, but the damage was done. The Blackhawks didn’t generate anything consistently the entire night, so thinking they could overcome a two-goal deficit inside the final minute would require a hefty bar tab to justify.

The Blackhawks got nothing done with the extra attacker and the game ended.

This was a frustrating, insomnia-curing effort from the Blackhawks against a terrible team.

Lankinen was terrific. He got nothing from his offense.

Reichel was credited with two shots on net, one blocked shot and one takeaway in 15 minutes of ice time. He showed some flashes of the offensive (and defensive) game that excites the organization. He was also on the ice for both of Seattle’s goals. It’s a learning curve.

Vlasic was credited with two hits in 10:16. He looked really good at times. But he skated 11 fewer minutes than Erik “won’t be here next year and he’s wasting a roster spot for the future right now” Gustafsson.

Which begs the question: what are we doing?

If Derek King wants this job longer than this season, it might be time to help Marc Crawford pick the pairs on the blue line and hand out ice time with the future in mind. Gustafsson has been a wasted roster spot the entire season; the fact he’s getting 21 minutes in a worthless game like Thursday night when you could get a better look at a top prospect who’s already burning a year of his contract is not only bad coaching, it’s bad business.

51 thoughts on “Blackhawks Celebrate Marian Hossa, Lose To One of the Worst Teams in the NHL”