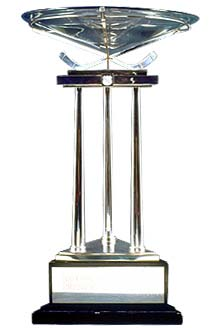 The Blackhawks bounced back from an underwhelming performance in Vancouver with a resounding victory in Edmonton on Wednesday night. With their 4-1 win over the Oilers, the Hawks clinch the Presidents’ Trophy for the first time since 1991.

However, while the box score might look like a controlled, dominant win, there was a moment of pause when Ray Emery removed himself from the game at 13:49 into the first period.

In relief, Corey Crawford was solid. He didn’t allow a goal against only 14 shots in the final 46 minutes of the contest. And one of his two saves in the second period was this ridiculous glove save against Jordan Eberle.

Skating in his first NHL game, center Drew LeBlanc had a pretty good game. He did get lost on Nail Yakupov’s goal in the first period, but by looked more confident as the game continued. Patrick Kane mentioned LeBlanc during his first intermission interview, saying he felt bad the kid was on the ice for a goal. The rest of the night, Kane tried to get the kid onto the scoreboard.

For his first NHL contest, LeBlanc won three of eight faceoffs and was credited with one takeaway and three shots in 13 shifts. He was minus-one, but had a number of good scoring chances in the final period.

Kane was the game’s number one star with the game-winning goal (in the first period) and assists later on goals by Johnny Oduya and Patrick Sharp.

Michal Handzus had a very good game, spending some time between Kane and Sharp in the second period and replacing Michael Frolik (scratch) on the penalty kill with Marcus Kruger. Handzus was credited with two assists and won nine of 14 faceoffs in the game. He was plus-three and blocked two shots as well.

Sharp’s third period ended with some vindication after concern. What appeared to be a knee-to-knee hit with just under five minutes left in the game had a visibly frustrated Sharp limping to the bench, but he returned to the ice in time to score an empty-net goal.

With nothing left to accomplish during the regular season, the final two games this weekend figure to see a number of players from Rockford in action.

Here are your Western Conference standings with all games final on Wednesday night: