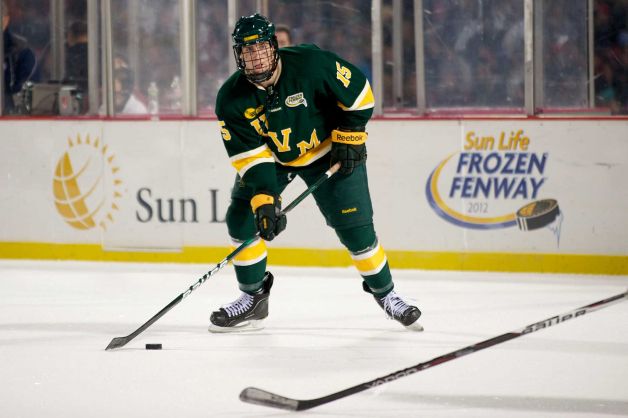 The college regular seasons are ending, and the Blackhawks have some prospects putting up impressive numbers this season. Vince Hinostroza, a sophomore at Notre Dame, is tied for fourth in the country with 30 assists, while Vermont senior Mike Paliotta ranks third among all defenseman in the country with 31 points.

Let’s catch up with the Hawks top college prospects.

Paliotta has also been credited with 51 blocked shots and has 14 power play points this season. His 133 shots on goal lead all college defensemen. He is a senior, which means he is eligible to sign a two-year contract with the Blackhawks whenever his postseason ends.

Hinostroza leads the Fighting Irish in most statistical categories, including 13 power play points, two game-winning goals and 40 penalty minutes. Hinostroza is a sophomore.

Motte’s 33 blocked shots are tied with JT Compher for the Wolverines’ team lead for forwards, and seven of his 18 points have come on the power play. Motte is also a sophomore.

Schmaltz, a freshman, has come on strong in the later stages of his first season at North Dakota. He’s winning over 53 percent of his faceoffs and has 10 points on the power play.

Calnan’s four game-winning goals ranks second at BC, but he’s gone through a tough scoring slump over the last month. He is also a sophomore.

Louis, a sophomore, was fantastic down the stretch, posting points in 11 of his last 13 games of the season.

Johnson, another sophomore, leads North Dakota with 87 shots on net to date.

Mattson, a senior, ranks fifth on the team with 29 blocked shots.

Snuggerud, only a freshman, has played in all 32 games for Omaha and has been credited with 31 blocked shots and eight points on the power play.

Jardine, a junior, has been credited with 42 blocked shots for the Buckeyes.

Sikura, only a freshman, scored four goals in the final five games of the season at Northeastern.

Tomkins lost four of his last six games and appeared in only three games after the calendar flipped to 2015.