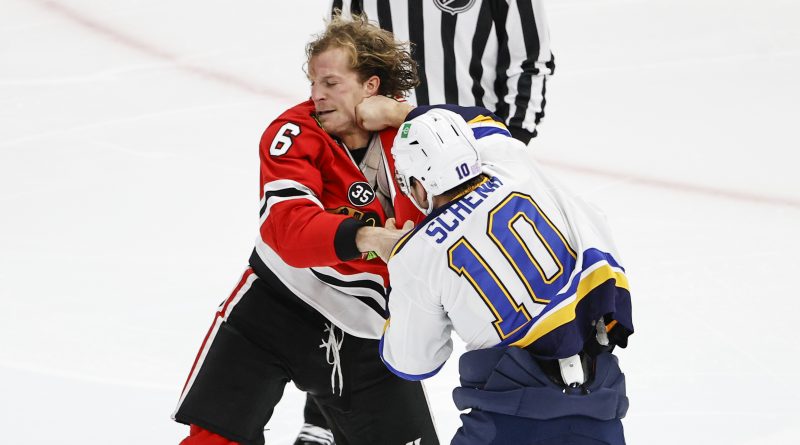 The Blackhawks returned to the United Center after splitting a four-game road trip. This game was supposed to be the Thanksgiving Showdown on ABC, but the Blackhawks being a trainwreck on and off the ice early this season saw it flexed to the mid-afternoon ESPN+ only broadcast. Good times.

The Blues, on the other hand, came in with seven defensemen in the lineup. They had lost six of their previous eight games. So this game didn’t shape up as the top-shelf rivalry matchup the network hoped for when they saw it on the schedule.

Making matters worse for Hawks fans was many finally remembering the game was only available on their phones/tablets only to find the Blackhawks down 1-0 less than one minute into the game. Pavel Buchnevich, who is going to be a headache for years now that he’s in St. Louis, scored 59 seconds into the game.

The Blues added a power play goal from Ivan Barbashev at 16:39 and took a two-goal lead to the room after 20 minutes. St. Louis out-shot the Hawks 16-10 in the first period and was the more physical team.

However, St. Louis only got four shifts from David Perron in the first period and he was done for the day. He was hit cleanly in the early stages of the first period, but it appeared he hit his head on the glass as a result of the hit and went straight to the room.

Chicago needed a spark so defenseman Jake McCabe decided to drop the gloves with Brayden Schenn. McCabe got his lunch handed to him but the Blackhawks responded surprisingly well from the fight. Six seconds after the fight, Jujhar Khaira got the Hawks on the board.

The Blackhawks did a nice job of controlling the puck for a majority of the second period, but the Blues kept the puck outside and limited the number of actual shots on net the Hawks were able to generate. Chicago and St. Louis were credited with six shots each in the second period, and the Blues started the third period with a one-goal lead.

Unfortunately the start of the third period was a gong show for the Hawks. Chicago got an early power play that saw a good cycle end when Patrick Kane lost an edge and the second PP unit look like absolute crap. From there, the Hawks offense disappeared.

The Blackhawks were trying to create some momentum and were doing a great job shutting down the Blues’ offense. Kevin Lankinen kept the puck out and the Hawks just needed one break. And they got one when a shot directed at the net was redirected by Brandon Hagel and slipped in for a game-tying goal.

Seth Jones and Jonathan Toews picked up the assists on Hagel’s seventh goal of the season; this is his third straight game lighting the lamp.

St. Louis had one shot on net in the opening 15 minutes of the third period.

The Blues got a few more good looks and put some pressure on the Hawks in the closing minutes but Chicago was able to hang on to secure overtime.

Lankinen stopped 22 of 24 in regulation. Seth Jones skated 26:52 before the overtime started and two Hawks forwards – Khaira and Alex DeBrincat – led the team with three shots on goal each. The Hawks out-shot the Blues 10-2 in the third.

Chicago started overtime with Seth Jones, Kirby Dach and Jonathan Toews on the ice. Kane came on for Dach but Toews and Jone sremained on for more than 70 seconds each. Toews went off for DeBrincat and the Hawks immediately got a 2-on-1 with DeBrincat and Kane attacking. Kane set up DeBrincat and the game was over. OT GWG for the Cat and the Blackhawks came back from a two-goal, first period deficit to beat the Blues.

This was a good win. The Blackhawks did not start well but slowly crept back into the game and Lankinen held them at two goals.

48 thoughts on “Blackhawks Come Back, Beat Blues In OT”