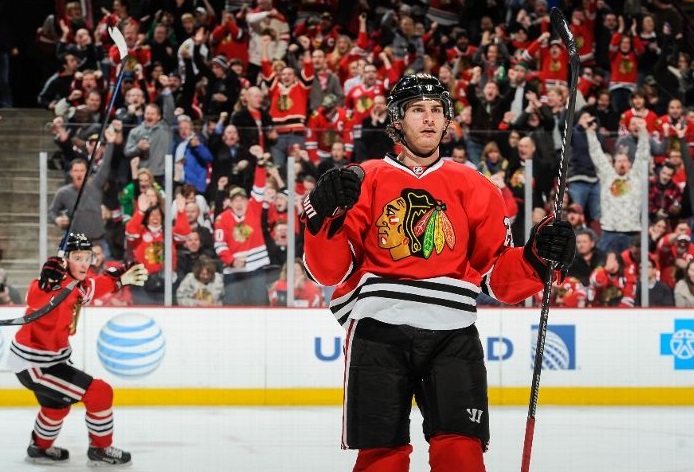 In a game worthy of the history of the series, the Blackhawks and Red Wings dueled through 65 minutes. Unfortunately for Chicago, the visitors were the better team in the shootout and escaped with the second point.

After dominating most of the game’s first 40 minutes, the Blackhawks had to erase two one-goal leads in the final 24 minutes to earn at least one points against Detroit. The Hawks outshot the wings 17-6 in the first period, with almost half of the shots coming on a strong power play. But Jimmy Howard was up to the task, keeping the Hawks off the board.

Chicago failed to score on a number of great chances early in the second period, and Tomas Tatar gave Detroit the lead at 16:10. The lead would only last 39 seconds, however, as Brandon Saad unloaded a missile to finally beat Howard and tie the game. (We’ll let you judge if Marian Hossa was on-side when the puck entered the zone.)

The story was the same in the third period, as the Hawks failed to score on the power play and let the Wings hand around. After Pavel Datsyuk held the puck in the zone, Corey Crawford attempted to play a bouncing puck well outside the blue paint. Darren Helm was able to tap the puck over both Crawford and Brent Seabrook and into the open net to give Detroit a 2-1 lead.

But like the first time the Red Wings scored, the Blackhawks answered quickly. This time, Detroit’s lead lasted 43 seconds before Kris Versteeg tipped a Duncan Keith shot past Howard to even the score. Crawford had been pulled before the shot for the extra attacker, and the Hawks were able to convert.

Regulation ended with the Hawks out-shooting the Wings 32-25, but Detroit held an 11-7 shot advantage in the third period. The Wings out-shot the Hawks 3-2 in the overtime period, but neither team converted.

Crawford was able to stop Datsyuk to open the shootout, but goals by Gustav Nyquist and Tatar were enough to win the skills competition.

Rookie Ryan Hartman dressed but once again came up with the lowest ice time among Chicago forwards; Hartman received only 7:36 in the game. He looked good in the time he was on the ice, and earned a few shifts late in the third period, a sign coach Joel Quenneville’s confidence may be growing. Hartman was credited with one shot on goal, one missed shot, one blocked shot and three hits in 12 shifts in the game.

Hossa led Chicago forwards with 24:09 on the ice in the game, picking up an assist on Saad’s goal and two takeaways. Patrick Kane skated 23:36 and finished tied for the team lead with five shots on net; Kane also blocked two shots. Patrick Sharp led the team with four hits in 16:50, while Seabrook finished tied with Kane for the team shot lead.

Kyle Cumiskey skated only 6:24 in the loss.

Keith was credited with a team-high five blocked shots and two takeaways in a game-high 27:17 on the ice.

The Hawks are back on the ice Friday night when the Colorado Avalanche visit the United Center. 42 thoughts on “Blackhawks Come Back (Twice), Fall In Shootout”