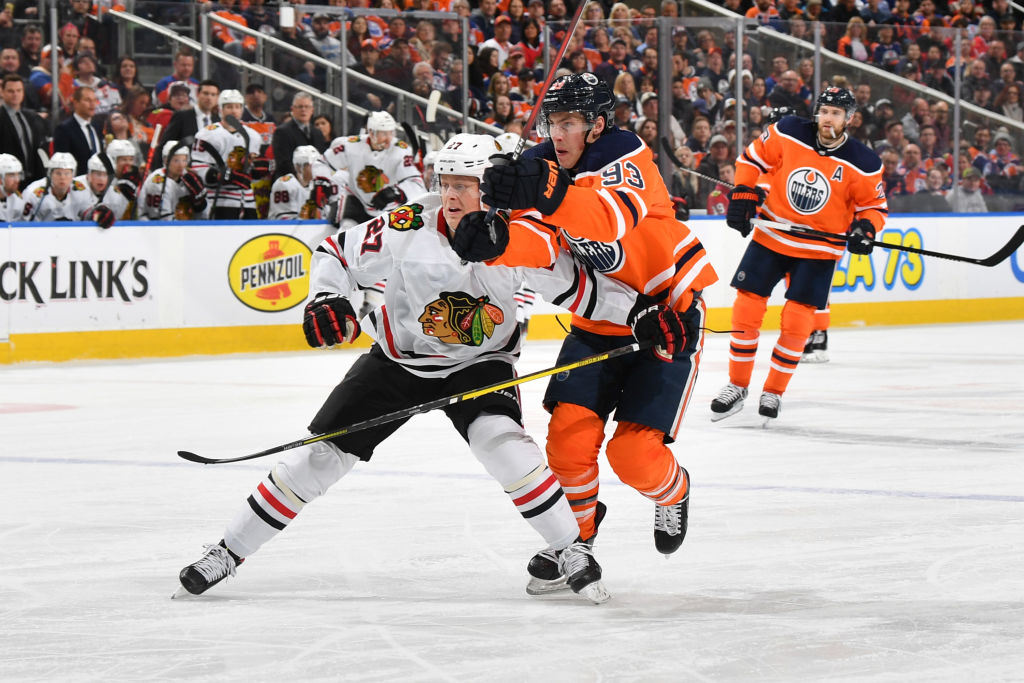 The Blackhawks ventured into Edmonton on Tuesday night and the pregame noise was loud. After losing three straight games including an epic third period implosion against the Jets, Chicago needed to get off to a strong start. Hours before the game, the Hawks got word they would be facing a significantly short-handed Oilers team. Connor McDavid would not play in this game because of injury.

How would Blackhawks coach Jeremy Colliton respond to not only a three-game skid but also word that McDavid was out?

With one positive roster move. Rookie defenseman Adam Boqvist was back in the lineup after missing the game in Winnipeg.

There is always balance with Colliton, however. For as much good mojo fans could take away from Boqvist being on the ice, Colliton decided to swap Alex Nylander into the lineup for… Dylan Strome. Because why not?

Throw into the mix a winter storm dumping snow on Edmonton, leaving many of the seats in the arena empty.

Chicago needed to show some intestinal fortitude out of the gates. They did the opposite. The opening 70 seconds of the game saw the Blackhawks completely overwhelmed by the Oilers. Riley Sheahan scored at 1:13 into the game and the Hawks appeared to be heading into a storm inside the building.

The Hawks didn’t fold, though. They fought back quickly.

Almost six minutes into the game, Patrick Kane got the puck ahead of the defense. Oilers defenseman Ethan Bear did a nice job of getting back in position to cut off Kane, but that didn’t stop Chicago’s superstar from finding Brandon Saad for a game-tying goal.

Saad’s 17th goal of the season gave the Blackhawks some bounce. It also pushed Kane up the all-time rankings in the NHL (again).

That Patrick Kane Assist tied him for 88th (with Lanny McDonald) on the NHL career points list with 1,006

The Hawks got caught with too many men on the ice at 13:13 into the first but it was Chicago that took advantage. Olli Maatta made a terrific play to get the puck up the ice to Ryan Carpenter. He set up the captain and Jonathan Toews gave the Blackhawks a 2-1 lead.

The short-handed goal was the 15th of the season for Toews.

That was the beginning of an eventful first period for Toews. Two minutes after scoring, Toews was sent to the box for a ghost penalty; Sheahan tripped over the official but Toews was still sent to the sin bin for a couple minutes. Kailer Yamamoto, who was having a terrific first period for Edmonton, scored a power play goal to tie the game at two.

A fast-paced first period saw the Oilers out-shoot the Hawks 13-12. Both teams put two on the board.

Two names that factored into the scoring in the opening 20 minutes continued to be everywhere in the second.

If Kane’s effort on the Hawks’ first goal was terrific he raised the bar early in the second period. Kane fought through a few hacks and found Boqvist streaking to the net. Chicago took the lead back.

Boqvist’s fourth of the season was another highlight caliber pass from Kane.

The lead wouldn’t last two full minutes, though. Yamamoto continued his strong play and tied the game up at 3:38 into the second.

Zack Smith went to the box 20 seconds after the Yamamoto goal on another phantom call. After Toews almost scored a second short-handed goal, the Oilers went to work and made the Blackhawks pay. Ryan Nugent-Hopkins scored his 15th of the season on the power play and the Blackhawks watched their one-goal lead turn into a one-goal deficit in 3:05 on the clock.

The Blackhawks power play was on the wrong end of two goals on power plays that shouldn’t have happened.

Sheahan went to the box to give the Blackhawks a rare power play opportunity at 9:07 into the second and Colliton rolled out two power play units that should have been reason to fire him between periods.

REMINDER: the Blackhawks desperately need a win. The power play has been the focus of everyone.

Entering Tuesday night’s game, Smith had been on the ice for 2:25 of power play time total in 48 appearances this season. Colliton apparently saw enough to promote him to the top unit based on that. And apparently Boqvist having scored a goal already in the game wasn’t enough for him to get onto the top unit; Gustafsson stayed there.

Shockingly, the Blackhawks failed to score.

Oscar Klefbom went to the box 65 seconds after the Hawks’ power play ended, giving Chicago yet another opportunity to be productive while having a hypothetical advantage on the ice.

At the end of 40 minutes the Blackhawks were getting out-shot 26-23 and were chasing one on the scoreboard. Neither goaltender looked comfortable, and neither team appeared to be very commited to the defensive end of the ice. The Hawks wasted two big power play chances in the second – continuing an ugly trend that personnel changes on the ice hasn’t improved.

One significant issue in the box score after two periods was the Hawks’ shots on net. Five of the 23 came from Connor Murphy – who skated 15:18 of the first 40 minutes. Toews, who was working his ass off all over the ice, was the only Hawks forward with more than two shots on net.

As the Blackhawks-Oilers approached the second intermission in Edmonton, scary news came out of Anaheim. Jay Bouwmeester collapsed on the Blues’ bench and required emergency medical attention. That game was later postponed; both teams appeared to be shaken. The Blues’ broadcast reported before the third period began in Edmonton that Bouwmeester was awake and on his way to an area hospital. Our thoughts/good vibes/prayers are with Bowmeester – this was an awful, scary situation.

Sheahan went to the box 4:12 into the third period and Colliton stayed with the same units he brought out in the second period. This time he started with the second unit, however. Chicago failed to do anything for two more minutes of power play time.

Half-way through the third period the Blackhawks held a 9-2 shot advantage in the period but weren’t able to beat Mike Smith.

The Blackhawks continued to dominate the puck but weren’t creating many tough chances for Smith. With five minutes left in regulation the third period shots showed the Hawks with an 12-2 advantage but Smith was getting a good look at almost everything.

Lehner took off for the bench after Boqvist neatly took the puck away from a streaking Leon Draisaitl. Chicago had Boqvist, DeBrincat, Kane, Toews, Keith and Saad on the ice with the empty net. Smith was able to freeze the puck with 1:28 left on the clock and Chicago used their timeout.

With three seconds left in regulation Draisaitl scored into the empty net to make the final score 5-3 in favor of the Oilers. The NHL’s leading scorer had a four-point night (one goal, three assists), giving him 89 points already on the season.

Toews won 15 of 25 faceoffs and put four shots on net in 21:26. He was also credited with two takeaways.

Kane led the Hawks with six shots on net in 23:10. He had two beautiful assists.

Dach skated 15:06 and put three shots on net but won only one of nine faceoffs. Boqvist skated 19:15 in his return from injury.

Chicago’s defensemen combined to block only three shots: Slater Koekkoek (one) and Murphy (two) were the only d-men credited with a block.

Smith skated 3:03 on the power play, more than doubling his year-to-date total. He also won six of eight faceoffs in the game.

49 thoughts on “Blackhawks Come Up Empty Against McDavid-less Oilers”