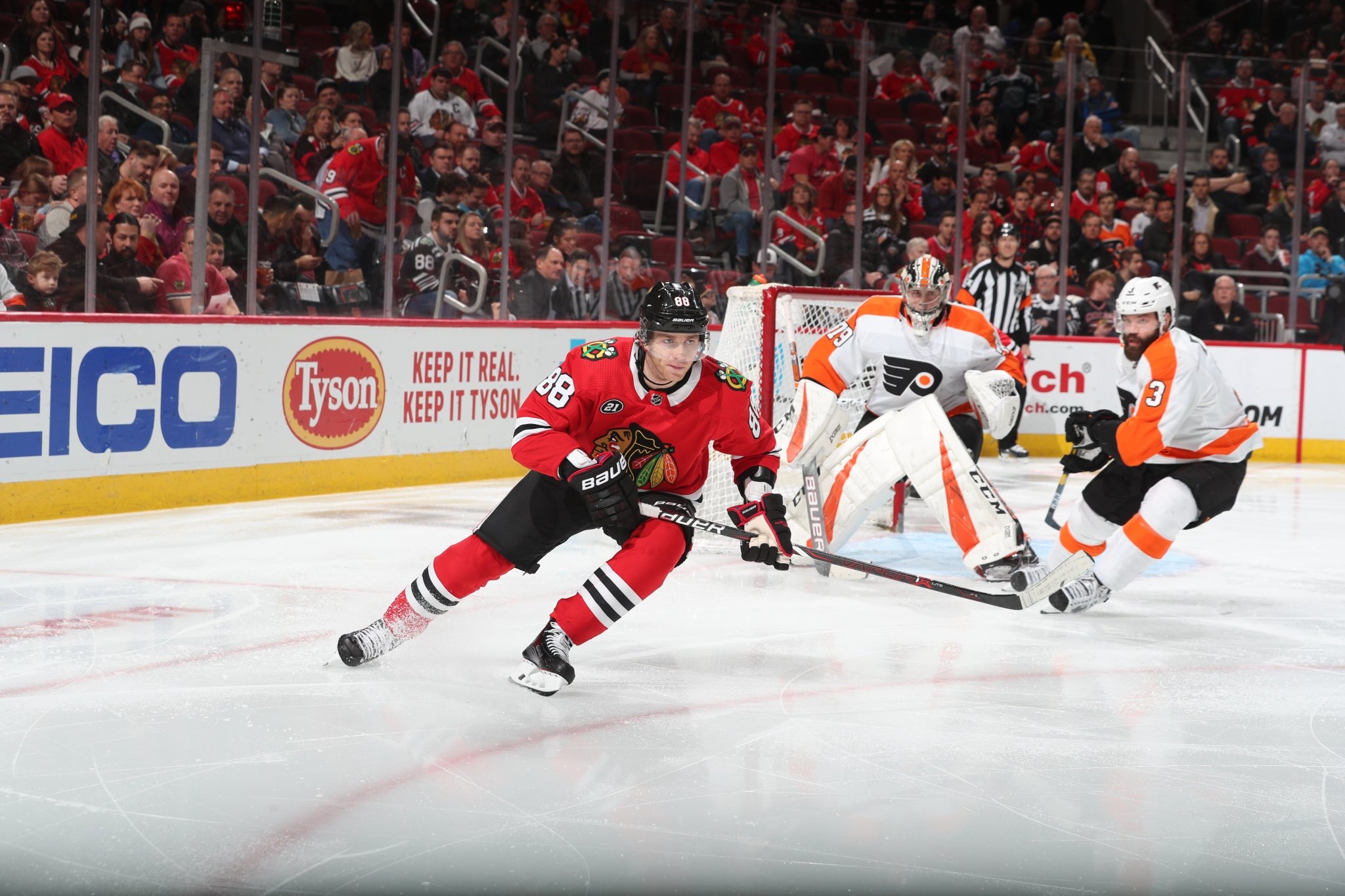 Philadelphia ventured to Chicago on Thursday night with the Blackhawks trying to keep their playoff hopes alive. The Coyotes loss went final early during the game, so there were points to be made up in the standings if the Hawks could come away with a victory.

The first period was fast and furious, with both goaltenders playing exceptionally well.

Gustav Forsling went to the box at 7:15 into the first for holding and the Blackhawks turned in one of their best penalty kills of the entire season. Chicago had the better chances while Philly had the advantage and the Hawks emerged from the PK with some momentum.

And that momentum turned into a goal as Erik Gustafsson blasted home his 15th goal of the season.

Forsling and Jonathan Toews were credited with assists on the goal.

The Flyers came back and tied the game five minutes later. After 20 minutes there easily could have been four or five goals, but the game remained tied at one. The Flyers held a 16-14 shot advantage after one period.

As much as the first period flew up and down the second was methodical. The Blackhawks out-shot the Flyers 16-7 in the second but neither team scored. Both Corey Crawford and Carter Hart were outstanding.

Almost ten minutes into the third the Flyers were able to beat Crawford. James van Riemsdyk flipped a backhand shot at the net and Crawford was screened by two bodies; it didn’t appear that he ever saw the puck.

After the JvR goal the Hawks struggled to get a good scoring chance for nine minutes. But once Crawford went to the bench the Hawks started to generate some buzz around the net.

With 1:53 left in regulation and the Blackhawks net empty a Patrick Kane shot was deflected and hit Travis Sanheim in the side of the head. The Flyers defenseman stayed down and eventually got a whistle despite the Hawks maintaining control of the puck. Toews was visibly pissed that the Flyers were able to get a stoppage while the Hawks were on the attack.

Sean Couturier scored 40 seconds later into the empty net to give Philly a two-goal advantage.

The Colorado Avalanche won in Dallas, moving them ahead of the Coyotes in the standings into the eighth and final playoff spot. The Hawks failed to gain in the race.

Crawford made 25 saves in the loss.

Toews led Chicago forwards with five shots on net. He was also credited with two blocked shots and two takeaways while winning 13 of 25 faceoffs.

Artem Anisimov led all Chicago skaters with three blocked shots. He was also credited with four shots on net but won just three of 11 at the dot.

57 thoughts on “Blackhawks Come Up Short Against Hart, Flyers”