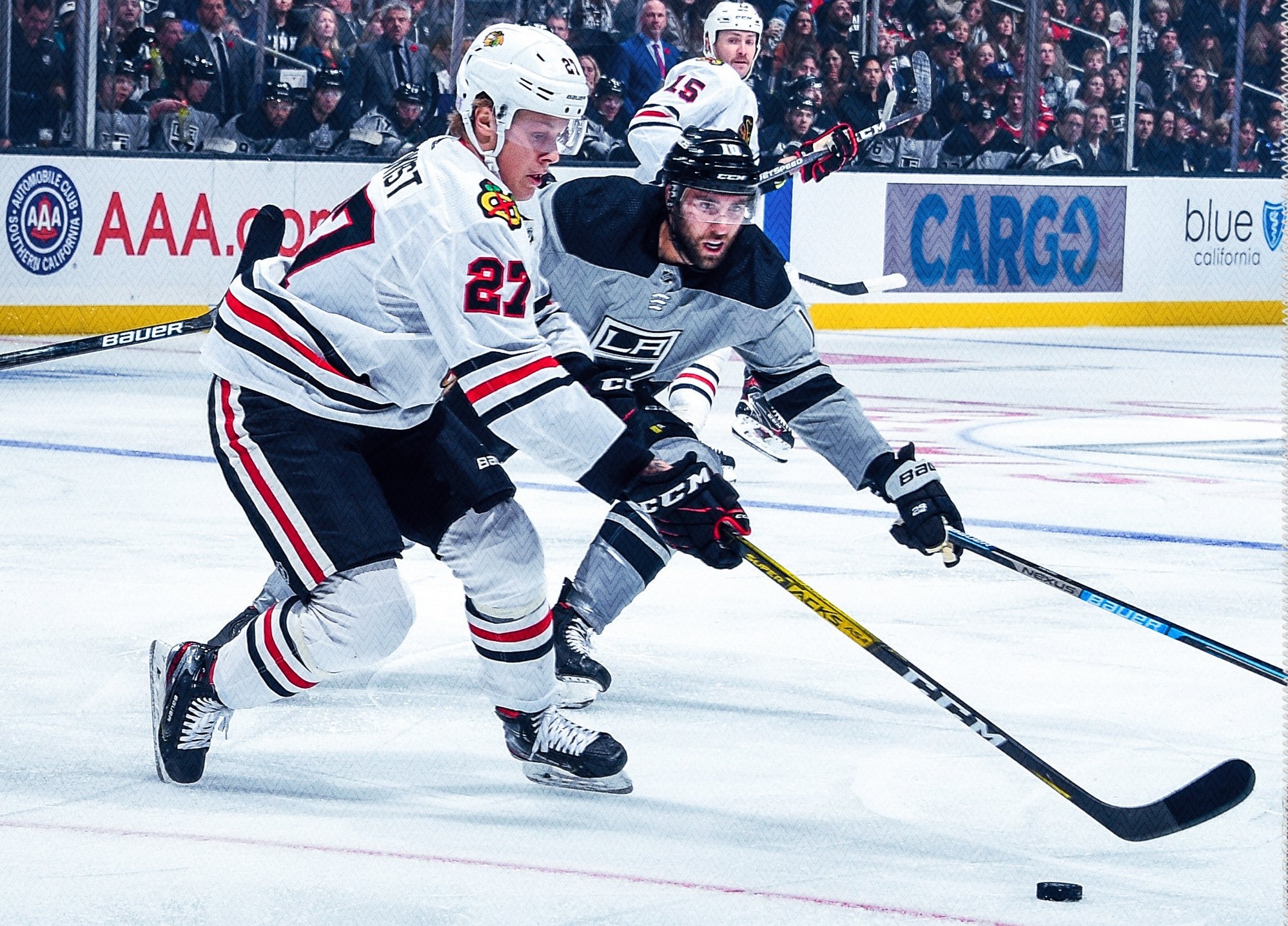 The future of the Chicago Blackhawks began in Los Angeles on Saturday night. Kirby Dach and Adam Boqvist, the team’s top choice in the last two NHL Drafts, were in the lineup for the first time together.

And, after the Hawks put it on the Kings last weekend, it seemed like a good opportunity to get the kids some run against a struggling team.

Brent Seabrook and Zack Smith also got back into the lineup for Chicago as the Hawks looked to put an ugly performance in Nashville in the rear view mirror.

Well, the first five minutes were far from what the Blackhawks hoped for.

Kyle Clifford scored a bad goal at 2:50 and Matt Roy scored at 4:29 to give the Kings a quick 2-0 lead. To make matters worse, the officials pulled Corey Crawford off the ice after the second goal. He got hit in the mask by a shot earlier in the period and did not track either of the two goals well; the concussion spotter apparently notified the on-ice officials that he needed a moment in a quiet place.

Robin Lehner entered the game and LA got a power play opportunity with Slater Koekkoek in the box. Lehner made a few big saves on the PK and the Hawks survived, holding the Kings at two goals.

Adrian Kempe returned the favor and headed to the box eight minutes into the first period and Crawford returned from the room. On the power play Dominik Kubalik, who was originally drafted by the Kings, scored to cut the lead in half.

Dach and Alex Nylander were credited with assists on the Kubalik goal.

Eight minutes later Jack Campbell made an incredible save on a nice Jonathan Toews shot attempt. Moments after that, however, Campbell wandered out of his net too far and got caught. Kubalik picked his pocket and David Kampf scored the easiest goal of his life.

At the end of one period of play the Blackhawks and Kings were tied at one in spite of Chicago using both goaltenders and being out-shot 17-12. After being on the receiving end of a terrible defensive performance in Nashville that saw the Preds put more than 50 shots on net, allowing 17 to the Kings in the first was not a good sign.

Of course Jeremy Colliton probably shouted and screamed about the 17 shots on net during the first intermission.

So the Blackhawks came out and got out-shot 18-8 in the second. The entire period was played without a penalty.

Neither team scored in the second. So the score remained tied in spite of the Kings holding a 35-20 shot advantage.

In a game that felt like a “next goal wins” scenario it was the Kings that broke through with their third goal first. Dustin Brown, who has lost a step, easily skated past Andrew Shaw and put an easy pass across the crease to Michael Amadio who tapped in the goal. Koekkoek would up on his ass after Amadio scored.

It was an ugly goal that’s perfectly emblematic for the issues the team is dealing with this season. Bad defensive play and terrible awareness on the ice leading to easy opportunities.

Crawford left the ice again, this time for an extra skater, with 2:48 left in regulation.

With the net empty, Jonathan Toews sniped home a tying goal with 99 seconds left in regulation. Toews was open on the far side of the ice from where Patrick Kane had the puck. There were six skaters – not including the goaltender – between Kane and Toews but 88 threaded the needle perfectly.

The horn sounded at the end of regulation with the score tied at three. Los Angeles out-shot the Blackhawks 45-24 in regulation; Lehner stopped all five shots he faced.

In regulation, Boqvist skated 13:24 with three hits and one blocked shot. Dach skated 7:29 with one assist and one hit. Why Dach was limited to 11 shifts in regulation is a terrific question. If the Blackhawks are committed to him being with the team the rest of the season, why is he not getting more run? Especially against a Kings team that isn’t quick up and down the ice?

Boqvist was the first defenseman to replace Duncan Keith in overtime, however.

With about 40 seconds left in regulation Nylander got a loose puck and exploded up the ice. He and Alex DeBrincat had a 2-on-none attempt with just the goaltender to beat and Nylander did his best Viktor Stalberg impression. No dice.

But the Kings came back the other way with a 2-on-1 of their own. Crawford made a terrific initial save but didn’t realize the puck had slipped through his equipment and rested a few inches out of the net. Drew Doughty took advantage, tapping in the game-winning goal with 16 seconds left in OT.

A crappy performance and ugly overtime appropriately ends with the Hawks losing.

Crawford played well between the second and fourth goals for the Kings. He made 40 saves, which is far too many.

The final shot totals were 49-27 in favor of the Kings. The Chicago Blackhawks have now allowed 100 shots on net in two (2) games.

104 thoughts on “Blackhawks Come Up Short In Overtime, Lose To Kings”