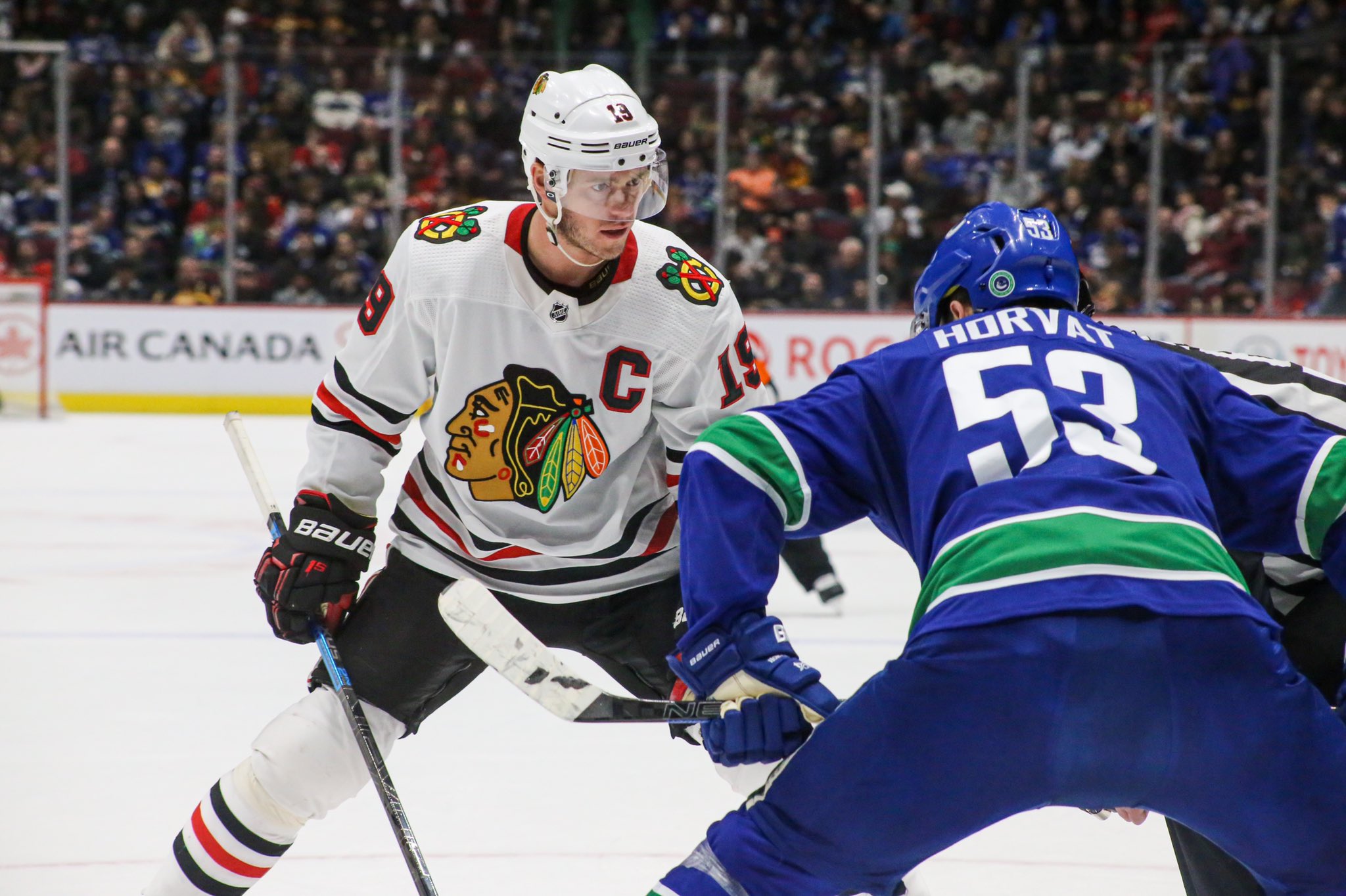 (Maybe not a 9 PM CT start on the first worknight after New Year’s Day?)

The opening 20 minutes looked like a couple teams feeling each other out. Chicago took a penalty for too many men 3:04 into the game. While the Blackhawks were able to kill the penalty, J.T. Miller scored quickly after Dylan Strome left the box to give Vancouver an early 1-0 lead.

Jacob Markstrom was playing exceptionally well between the pipes for Vancouver. Nine minutes after the Miller goal, Connor Murphy found a loose puck and was able to beat Markstrom to tie the game.

Jonathan Toews and Dominik Kubalik picked up the assists on the Blackhawks’ first goal of the new decade.

To answer the obvious trivia question that comes from Murphy scoring, here are your answers:

First #Blackhawks goal of the:

Chicago held a 12-7 shot advantage after 20 minutes and the score was tied.

The pace and physical play both accelerated quickly in the second period.

Tanner Pearson’s 12th of the season gave Vancouver a 2-1 lead 2:48 into the second. Chicago bounced back with three goals in the following 5:29 to take a 4-2 lead.

Zack Smith picked up one of the assists on the Kampf goal, the 200th point of his career.

Adam Gaudette tripped Alex DeBrincat 1:45 after the Kampf goal and Chicago was able to convert on the power play. Adam Boqvist set up Patrick Kane who unloaded for his 23rd of the year.

Less than two minutes after the Kane goal, Toews got into the action. He danced Alex Edler and threw a puck at the net. The shot hit Quinn Hughes in the backside and bounced into the net for Toews’ 10th of the season.

The Toews’ goal marked the 100th time in their Hall of Fame careers that Kane and Toews have scored in the same game.

At that point the Blackhawks were rolling, but Vancouver wisely used their timeout to get their act together. No goalie change, just a moment to collect their thoughts and regroup on the bench.

Smith went to the box less than 60 seconds after the timeout was called and Vancouver cashed in. Hughes scored to cut the lead to one. Elias Pettersson tied the game at four 85 seconds later.

Momentum was back in blue, Robin Lehner appeared to be shaken by a couple high shots and both teams were scrambling to keep shots away from the net.

The two teams combined to put 31 shots on net (18-13 in favor of Vancouver) in a frenetic second period. The score was tied at four after 40 minutes. Toews (one goal, one assist) and Kubalik (two assists) had a multi-point game after two periods. The only forward line that hadn’t scored was DeBrincat, Strome and Kirby Dach.

At 8:10 into the third period a centering pass by Loui Eriksson was initially saved by Lehner but the rebound hit Dennis Gilbert in the back of the leg and bounced back into the net to give Vancouver a 5-4 lead.

Kane wasn’t going to let five be enough to win this one. Toews started a rush with a collision and Kubalik set up Kane who unloaded a shot through Markstrom to tie the game with 6:16 left in regulation.

Kubalik picked up his third assist of the night on the goal. Duncan Keith was credited with the second assist.

With five minutes left in regulation Pearson ran over Lehner and landed on him. Chicago’s netminder stayed down, holding his right knee until play was stopped and the Hawks trainers could come out for a conversation. Lehner, who had taken a couple shots around the neck area earlier in the game that appeared to sting him, stayed in the game.

Gaudette sniped home his eighth of the season at 15:49 into the third to give Vancouver a 6-5 lead.

With 2:41 left in regulation the Hawks got a golden opportunity. Former Hawks prospect Tyler Motte went to the box for tripping, giving Chicago a desperately-needed power play.

Chicago didn’t pull Lehner early in the power play – thankfully. Vancouver got a 2-on-1 opportunity that was saved by Lehner. He went to the bench with 60 seconds left in regulation as the power play wound down.

The Hawks wasted the power play.

After Boqvist made a pretty pass to Erik Gustafsson – whose shot was blocked – Bo Horvat banked a shot into the empty net with 8.8 seconds showing on the clock to give the Canucks a two-goal lead.

That’s how the game would end. For the second time in five games the Blackhawks allowed seven goals.

Lehner stopped 30 of 36 and took a beating but wasn’t sharp.

Toews won 14 of 19 faceoffs and was credited with two hits, two blocked shots and an assist with his goal in 19:25.

Kane led Chicago with six shots on net in exactly 23 minutes on the ice. He scored twice.

Gilbert had a bad night. He was limited to 12:38 and was credited with three hits but wasn’t his best. Murphy was the only other Hawks defenseman credited with a hit; he had three as well.

Strome won five of 13 at the dot and was minus-three in 19:28. Ryan Carpenter was minus-four and won only three of 14 faceoffs.