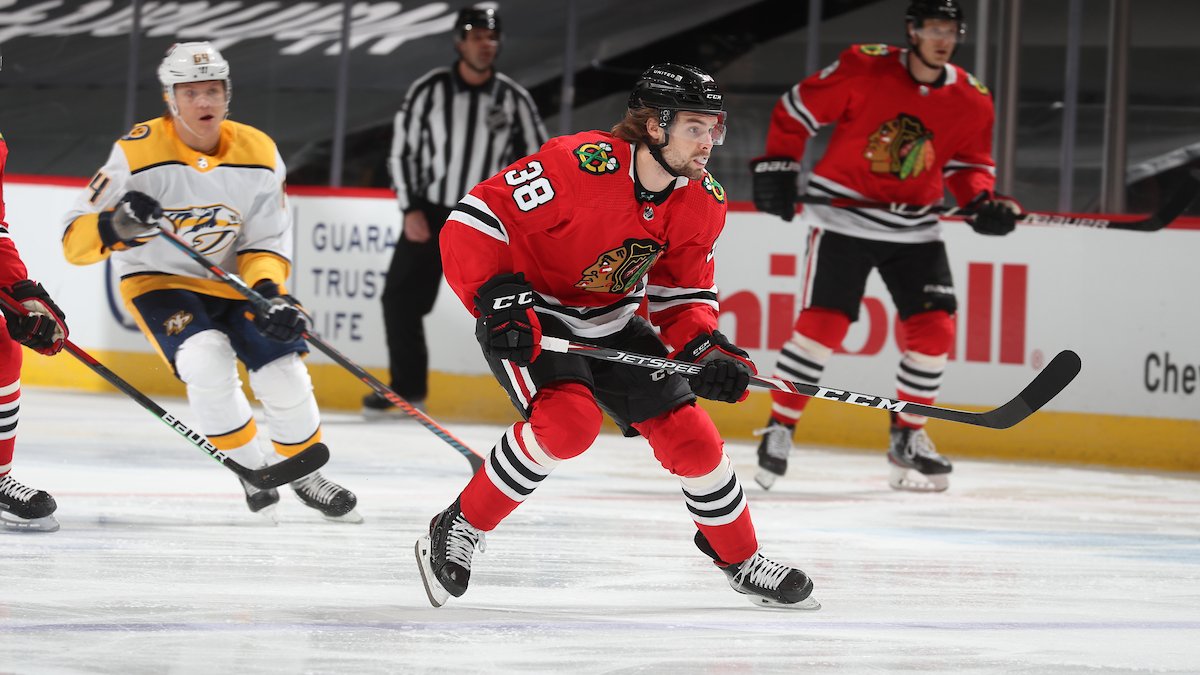 After two games against the Florida Panthers without Sasha Barkov, the Blackhawks’ lineup luck continued. Filip Forsberg was a healthy scratch for Nashville on Saturday evening because of an upper body issue.

Meanwhile, Kirby Dach was activated off injured reserve and made his first appearance of the 2021 season. He started the game on the third line with Mattias Janmark and Dylan Strome as his wings. Nicolas Beaudin was back in the lineup for the Hawks with Ian Mitchell sent to Rockford earlier on Saturday.

One would hope Dach coming back earlier than anticipated would give a team currently in a playoff spot some bounce early. And Dach wasted no time showing he was as confident in his first game of the 2021 season as he was at the end of the 2020 bubble. He tried this move on his second shift:

Kirby Dach bringing the dangles in his first game back pic.twitter.com/zd2PqHyXK0

Unfortunately, the rest of the Blackhawks didn’t bring much offense with them.

Chicago was credited with one shot on net in the opening 11:55 of the game. Moments after Chicago’s second shot, off the stick of Brandon Hagel, the Blackhawks went to the first power play of the night. Dach was back on the top unit right away.

It took the Hawks about 45 seconds to control the puck and get it into the zone but from there they did a nice job of keeping the puck. They did not score, however.

Dach showed a willingness to shoot whenever he got the puck in the first period and looked quick as he navigated the defense. His size also stood out among a forward group that’s lack of size has been discussed a fair amount recently.

Kevin Lankinen had a terrific first period, allowing only the one goal against 15 shots. The skaters in front of him were credited with only six. Lankinen made a few saves against quality chances to keep the game close.

Dach skated 5:27 in his first period back and was credited with one shot on net and another attempt that was off the mark. He did not take a faceoff in the first period.

The Blackhawks started the second with another power play when Yakov Trenin took a seat 49 seconds into the period. This advantage was successful as the first, sadly.

Nashville had a prolonged shift in the Blackhawks’ zone 12 minutes into the period that had the Hawks’ five skaters n the ice for two minutes. The Hawks were able to get a couple fresh bodies on when the puck briefly entered the Preds’ zone but Nashville attacked again. David Kampf tried to pass the puck through multiple Predators skaters up the middle of the ice (note: not a good idea) and it backfired. Rocco Grimaldi ripped home his eighth of the season and Chicago now trailed by two.

Chicago started to put together better shifts in the second half of the second period, though. And one rush finally paid off. Patrick Kane attacked and put a hard shot on net that escaped the grasp of Juuse Saros. Pius Suter followed the shot and tapped home the rebound to cut the Nashville lead in half.

Kane and Boqvist picked up the assists on Suter’s 11th of the year. Immediately following the Suter goal, Jeremy Colliton put Dach out with Kane and Alex DeBrincat.

Through two periods, Dach had skated 11:12 (of which 2:43 on the power play) with one shot on net and one takeaways. He won one of two faceoffs in the second period as well.

Seven minutes into the third, coming out of a television timeout, Colliton sent Dach out between Kane and Mattias Janmark.

The Blackhawks had a terrific chance with Connor Murphy getting the puck on net (with a redirect from Suter) and Suter was there for a close tap-in try of the rebound but Saros somehow kept the puck out of the net.

Chicago was getting shots on net in the third period but Saros wasn’t having it. Lankinen went to the bench for a sixth attacker with 2:45 left in regulation.

The Blackhawks couldn’t solve Saros and the Preds won their fourth in a row to climb closer to Chicago’s heels in the division race. Nashville is now two points behind the Hawks.

Dach was heavily involved in the faceoff circle in the third period. He finished the night winning 4 of 10 but was spending most of his time between Kane and Janmark. He skated 20:08 in the game.

Nashville made life miserable for the Blackhawks all night; they were clearly the more physically aggressive team. After two solid efforts against Florida, this game did not stack up with as much grit and energy and it showed in the final score.

Brandon Hagel was limited to 13:05 but led the team with four shots on net.