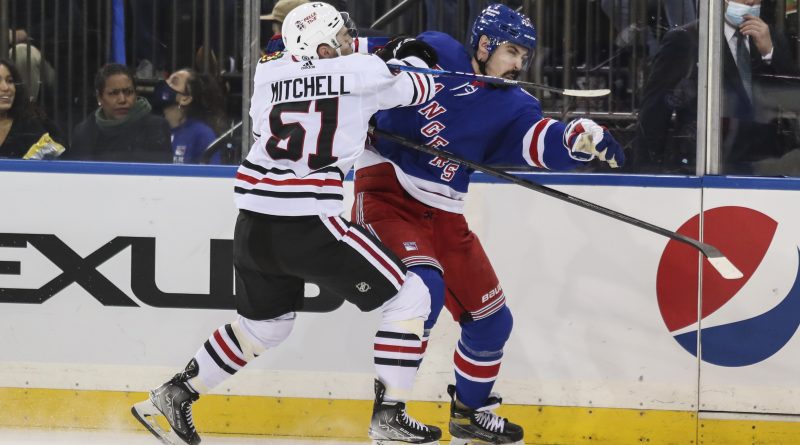 The Blackhawks visited Madison Square Garden on Saturday night for an Original Six matchup with the Rangers. Chicago then heads across town to visit the beautiful new UBS Arena, home of the Islanders, on Sunday evening before welcoming the Rangers to the United Center on Tuesday.

Because the Hawks had back-to-back games and were facing the Rangers twice in four days, Kevin Lankinen got the call on Saturday night.

Also of note, Jake McCabe wasn’t with the team because of a family matter so the Hawks recalled Ian Mitchell from Rockford. After spending most of his professional career either in Jeremy Colliton’s doghouse or Rockford, it would be interesting to see how the talented Mitchell performed in his first NHL game with Derek King as his head coach.

Chicago did a nice job of generating some offense in the first period but for 19 minutes neither side was able to put together a strong, extended push. With 23 seconds left in the first, Seth Jones initiated a rush and a high shot was knocked down the ice neatly by Brandon Hagel, perfectly setting up Patrick Kane for the Hawks’ first goal of the night.

The Rangers challenged that Hagel’s play was with a high stick. The officials took an incredibly brief look at the play and ruled it was a good goal.

After 20 minutes the Blackhawks had a 7-5 shot advantage and were up 1-0 on the scoreboard. Lankinen looked good and his skaters were limiting the number of opportunities the Rangers had to score.

Unfortunately, the second period went the wrong direction for the Blackhawks.

New York killed the remaining time on the penalty resulting from their challenge of the scoring play late in the first period. They then attacked, and got a four-minute advantage of their own when Henrik Borgström caught Filip Chytil with a high stick, drawing blood.

The Rangers tied the game on the power play as Ryan Strome received a ridiculous pass from Artemi Panarin and found an almost empty cage. The pass from Panarin crossed from one faceoff circle to the other through traffic and found Strome on his tape. We remember when he was doing that in a more friendly sweater; this time it was for the Hawks’ opponent.

Adam Fox was making it painfully clear to Blackhawks fans who don’t watch much Eastern Conference hockey that he is one of the finest defensemen in the league; he won the Norris Trophy last year and could easily repeat. Fox found a loose puck and scored his fifth goal of the season at 17:25 into the second period to give the Rangers a 2-1 lead. Panarin picked up a second assist on the play giving him and Fox two points in the game.

There were two extended stretches of time without a stoppage, something that’s become a trend for the Blackhawks this season. The Fox goal ended almost nine minutes without a whistle and saw the Rangers spend most of that time in their offensive zone, effectively executing line changes while keeping the puck in the zone. Chicago was chasing the puck and their tails too much in the second, and it hurt them on the scoreboard.

The Rangers out-shot the Blackhawks 13-9 in the second period and took a 2-1 lead to the third.

Chicago had two penalties early in the third period and we started to see something from Mitchell we rarely — if ever — saw while Colliton was coaching the Hawks. Mitchell was getting frequent penalty kill minutes, and was doing a good job in that regard. Indeed, Mitchell played his best game of the season and had a few really nice plays on penalty kills early in the third period.

Unfortunately, Panarin scored his seventh of the season with 5:14 left in regulation to extend the lead to 3-1. The goal gave Panarin three points in the game. Ryan Strome picked up a second assist in the game on Panarin’s goal.

Lankinen was playing well and the skaters in front of him were trying their best, but the Rangers executed well and were able to control the puck for the majority of the game’s final 40 minutes.

With 79 seconds left in regulation, it appears a shot slipped through Alexandar Georgiev. The whistle blew and the play was initially ruled no goal on the ice, but the officials went to the review process. It was ruled that the puck had completely crossed the line before the whistle blew and the Blackhawks were awarded their second goal of the game, cutting New York’s lead to just one.

Alex DeBrincat was credited with Chicago’s second goal of the night.

Chicago was close, but they wouldn’t get the cigar. The Rangers were able to limit the Blackhawks’ shot opportunities in the final minutes with the extra attacker on the ice and the Rangers escaped with a 302 victory.

Mitchell skated more than 16 minutes in the game and spent 3:29 killing penalties in the game. Only Calvin de Haan (3:41) spent more time on PK duty among Blackhawks defensemen in the game. It was nice to see Mitchell have a little trust from a head coach and perform pretty well. He finished tied with Seth Jones for the Hawks’ lead with three blocked shots in the game.

de Haan, who has been banged up lately, was one of two Blackhawks defensemen over 20 minutes in the game. He skated 24:35 while Seth Jones skated 29:43.

The Blackhawks took advantage of another poor team at the dot and won 56 percent of the faceoffs in the game. Jonathan Toews won 12 of 19, Ryan Carpenter won all five of his faceoffs and Kirby Dach won half of his ten opportunities.

33 thoughts on “Blackhawks Come Up Short At Madison Square Garden”