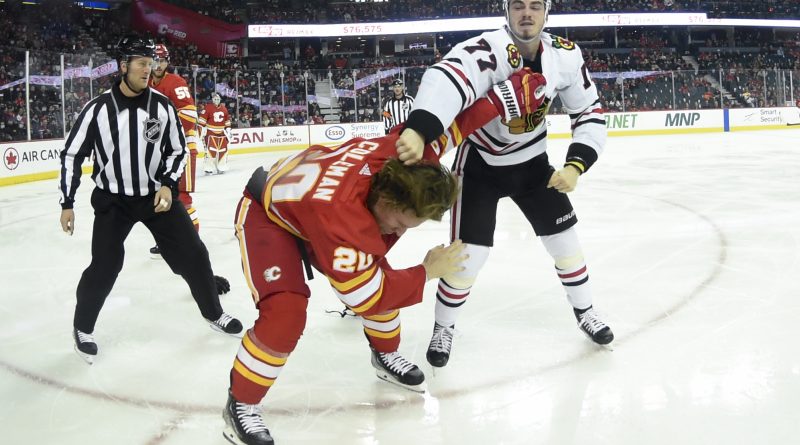 The Chicago Blackhawks rolled into Calgary winners of five of their last six games. The host Flames were on a three-game win streak of their own and sat in first place in the Pacific Division. So even though the standings don’t love the Hawks, this Tuesday night game featured two teams playing successful hockey recently.

Caleb Jones returned to the lineup with Wyatt Kalynuk returning to the NHL roster but in the press box. Philipp Kurashev joined Adam Gaudette as a scratch as well.

The puck dropped and things got crazy within the first minute. Blake Coleman hit Alex DeBrincat from behind in a way that usually warrants a teammate letting him know the hit wasn’t appreciated. The Blackhawk who turned on the dance music was… Kirby Dach?

Dach and Coleman took a seat for five minutes each. After Dach missed as much time as he did with a wrist injury last season, seeing him drop the gloves was an uneasy few moments.

Marc-André Fleury has been incredible since the calendar rolled over to November, but Dillon Dube beat him with the first Calgary shot of the game. It was from a wide angle, but certainly a shot Fleury wants back; he lost his net, something we hadn’t seen in a few weeks.

One tough goal deserves another, and the Blackhawks were happy to tie the game when Brandon Hagel found a loose puck and ripped a shot past Jacob Markstrom to tie the game.

Ryan Carpenter and Reese Johnson picked up the assists on Hagel’s goal. The helper marked the first career point for Johnson. But he wasn’t done.

At the end of the first period, Calgary had out-shot the Hawks 13-7 and had a 2-1 lead. Fleury settled down later in the period but the Hawks were starting to go too long between shots on net. Life was too easy for Markstrom.

Maybe the ease with which he handled the second half of the first period had an impact on Markstrom early in the second. Almost four minutes into the middle period he committed a terrible turnover from behind his net, finding a wide open Johnson who ripped the shot past him as he tried to get back in position. Johnson’s first career NHL goal tied the game at two.

From there it was mostly Fleury making save after save, the Blackhawks blocking shots in front of him and their offense being just a little off again.

The Flames out-shot the Blackhawks 14-8 in the second and had a 27-15 shot advantage heading to the third. But the scoreboard showed the teams tied at two, and the Hawks finally got some secondary sources of offense to show up.

Chicago actually started winning puck battles more frequently early in the third period. Dach was doing a great job getting to the front of the net and Chicago was turning loose pucks into offense, spending more time on the right end of the rink.

The longer the Blackhawks hung around the longer it felt like the next goal might win this game. Sadly, that next goal game at 14:25 off the stick of Matthew Tkachuk.

Fleury went to the bench with two minutes left in regulation and the Flames added an empty net goal to extend the lead to 4-2 (and hit a sixth total goal for this interested in such things). With 25 seconds left in the game Johnny Gaudreau scored a second ENG to make the final score 5-2.

But the Hawks didn’t have enough and took the loss.

In most of the games since Derek King took over as the head coach of the Blackhawks, there have been excuses for the Hawks winning. Pittsburgh didn’t have Crosby or Malkin. Seattle sucks. Vancouver sucks, too. But Calgary came into this game playing well and the Blackhawks hung around. This was arguably the best performance from the Hawks since King became the head coach.

Chicago finishes their four-game road trip with a 2-2 record, with losses coming to Edmonton and Calgary — two of the best teams in the Western Conference.

The Blackhawks were credited with 21 shots on net in 60 minutes. Patrick Kane (five), Hagel (four), Dach (three) and Jake McCabe (three) accounted for 15 of the 21 shots. That’s not good enough.

Chicago competed on Tuesday night. They really tried. But the reality is pretty clear at this point: if Ryan Carpenter, Juhjar Khaira and Mike Hardman are three of the best 12 forwards you have available, you’re not a playoff team. The Blackhawks are near the bottom of the NHL in goals per game because they don’t have enough legitimate options.

Dach, Jonathan Toews (who won half of his 22 faceoffs) and Dominik Kubalik aren’t getting anything done offensively. If the entire offense is going to come from Kane and DeBrincat, the Blackhawks are going to struggle to beat decent teams in the league.

74 thoughts on “Blackhawks Come Up Short In Calgary”