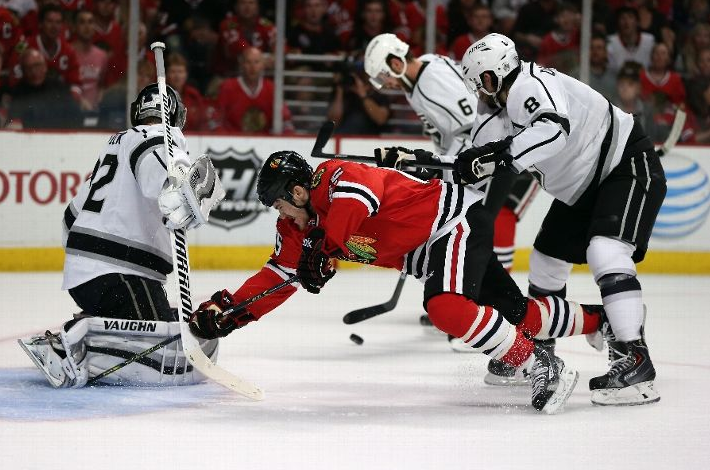 The Blackhawks and Kings treated hockey fans to seven fantastic games in the Western Conference Final, and it seemed fitting that the series would take an extra period of sudden death hockey to be decided.

Unfortunately for the Hawks and their fans, it was Los Angeles that found the back of the net in overtime and emerged victorious in the best series if the 2014 postseason.

Chicago battled back from being down 3-1 in the series to force a seventh game, the the climax of the series was worth every penny once again. The Hawks stormed out to a two-goal lead in the first period, scoring twice in the first 8:36 of the game. Brandon Saad got Chicago on the board, converting a pretty pass from Patrick Kane to make the score 1-0. Exactly 3:30 later, Jonathan Toews was on the doorstep and a pass deflected by Kane found him all alone for the power play goal to make the score 2-0.

But the Kings came back and tied the game, scoring twice in the next nine minutes. A Dustin Brown shot popped up in the air and Jeff Carter tipped the puck over Corey Crawford to cut the lead in half. Only 51 second later, Justin Williams added another Game Seven goal to his incredible postseason resume to tie the game.

If momentum was the Hawks’ early, it appeared to have changed jerseys just as quickly.

But 12 seconds after Williams’ goal, Patrick Sharp put a bouncing puck past Jonathan Quick to give the Hawks the lead back. When the dust settled after 20 minutes, the Hawks held a 3-2 lead.

Tyler Toffoli, who has torched the Hawks this season and in the series, tied the game at 10:31. After that goal was scored, a parade to the penalty box started. At 12:11, Willie Mitchell went off for boarding Marcus Kruger. Drew Doughty joined him in the box 73 seconds later after cross-checking Andrew Shaw.

The Hawks weren’t able to convert during more than 40 seconds of 5-on-3 play, and Saad cut the second power play short when he slashed Jeff Carter at 14:40. The 4-on-4 and subsequent LA power play concluded without either team making a mark on the scoreboard.

Trevor Lewis went to the box at 17:15 and the Hawks made the Kings pay. Sharp scored his second of the game – and series – 70 second into the power play, and the second period ended with the Hawks once again clinging to a one-goal lead.

Marian Gaborik scored the only goal of the third period, and the game went to overtime.

Both teams had opportunities early in the extra session, but Alec Martinez got a shot past Crawford 5:47 in to end the series and send the Kings to face the Rangers in the Stanley Cup Final.

The Hawks wanted to be better at the dot, and they were; Chicago won 40 of 76 faceoffs in the final game. Toews won 17 of 21 and Kruger won nine of 11 to lead the way.

The Hawks wanted to be better on penalty kill, and they were; Chicago only went to the box twice in the final game, and successfully took care of both short-handed situations.

The Hawks needed to block more shots, and they were able to be much more effective on that in Game Seven. Ben Smith led the Hawks with six blocks and Niklas Hjalmarsson had five as the Hawks blocked 23 as a team.

The Hawks needed to get more shots on net, and they did that as well. Chicago out-shot LA 41-32 in the game, including a 16-4 advantage in the second period.

But the Hawks needed to score the game’s final goal, and they weren’t able to do that.

It had been a long series, but both coaches cut their bench short early in on Sunday night. Brandon Bollig skated four shifts in the game (2:28) and Kris Versteeg had seven shifts (3:44) in the loss. Darryl Sutter limited Kyle Clifford to seven shifts (2:52) and Trevor Lewis to only ten (5:47).

Crawford made 27 saves in Game Seven and finished his playoffs with a 2.53 goals against average and .917 save percentage. Both of those numbers were better than Quick as the Conference Final comes to a close, but Quick will get to play on Wednesday.

Sadly, the Hawks’ next trip to the United Center will be to clean out their lockers for the summer. The front office will prepare for the draft and free agency, and the players will have to watch the Cup Final from home like the rest of us.

And, still, no team has repeated as champions since 1998.

272 thoughts on “Blackhawks Come Up Short, Season Ends In Overtime”