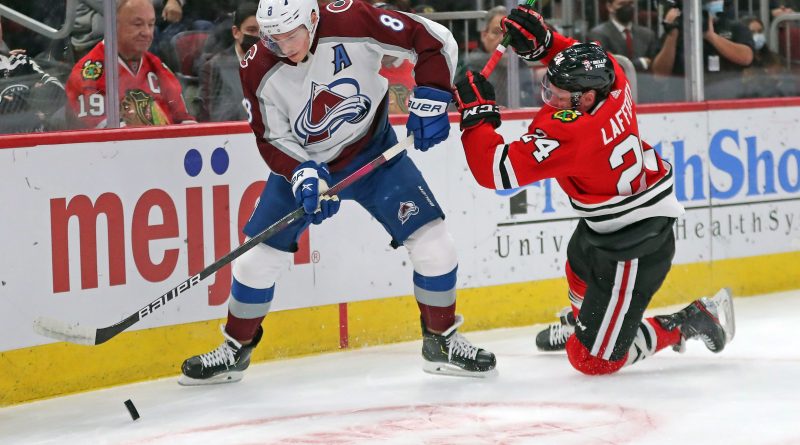 After putting an eight-spot on the Red Wings in Detroit on Wednesday, the Blackhawks came home to face… the Colorado Avalanche.

They were going from racing go carts to chasing race cars…

And doing it without Jonathan Toews, who is in concussion protocol.

The first period was relatively pedestrian. Chicago out-shot Colorado 11-6 and had two power plays to the Avs’ one. Neither team scored, but the game was getting increasingly physical as the period came to a close.

Unfortunately, the second period wasn’t as kind to the Hawks.

Calvin de Haan went to the box in the opening seconds of the period and Colorado got on the board. Gabriel Landeskog scored the power play goal.

The game started to feel more and more like the Avs were starting to take complete control. It appeared that Alex Newhook scored on his 21st birthday, but the Hawks challenged that the play was offside. Video review proved the Blackhawks to be correct, and Newhook’s birthday goal was taken off the board.

About six minutes into the second, Brandon Hagel and JT Compher got into a scrap. The two exchanged pleasantries a few times before the gloves came off in front of the Hawks’ bench. Both players got a few shots in but we’d give the decision to Compher.

Compher was now one-third of his way to a Gordie Howe hat trick. He added a goal to the checklist at 16:04 into the second, a goal that stayed on the board and gave Colorado a 2-0 lead.

The Avs didn’t score again but controlled the second period thoroughly, aided by two power plays and a third — with Patrick Kane in the box — that only had nine seconds in the middle period. Colorado out-shot the Hawks 13-9 in the second.

With Kane in the box to start the third, the Avs took advantage again. For a second time, Landeskog scored on the advantage to make the score 3-0 at 1:16 into the third.

Then things went a little crazy for two minutes.

Hagel got the Blackhawks on the board 22 seconds after the Landeskog goal.

And then Kane, fresh out of the box, scored 40 seconds later to cut the Avalanche lead to just one.

The track meet we watched in Detroit decided to show up in the opening minutes of the third period. Could the Blackhawks erase the entire three-goal lead?

Newhook was denied a birthday goal in the second period, but he got one that stayed on the board 36 seconds after the Kane goal to give the Avs a two-goal lead once again.

The two teams combined to score four goals in less than 100 seconds.

After getting boat raced out of the barn in Denver earlier this week, the Blackhawks actually hung around in the third period. And, with six minutes left in regulation, a strong shift by Dylan Strome, Hagel and Kane ended with 88 scoring his second of the night.

Kane’s goal made the deficit just one again. The Blackhawks were out-shooting the Avs 16-5 when Kane scored, showing more pushback than they’ve had against Colorado this year. Strome picked up his second assist of the night.

The Hawks pulled Marc-André Fleury for an extra attacked with about 2:30 left and, of course, the Avs quickly found the back of the net. Mikko Rantanen made a nice pass between his legs to an open Nazem Kadri who made the deposit to make the score 5-3 Colorado. With the goal, Landeskog and Kadri each had a three-point night.

Deflating as that may have been, the Blackhawks weren’t done. Landeskog kicked a puck into his own net 33 seconds after Kadri’s goal to bring the Hawks back within one. Hagel was credited with the goal, giving him two on the night.

With 12 seconds left in the game, Cale Makar tried to clear the zone. It hit Erik Gustafsson’s stick and popped up in the air… coming down like a line drive in the net. The empty net goal closed the books for the night.

The Blackhawks took the L in this one but their fight was impressive. The line of Hagel-Strome-Kane combined for 17 shots on net (10 from Kane). Hagel had two goals; Kane had two goals and one assist. Strome had two assists and won nine of 21 faceoffs.

Ryan Carpenter won 10 of 13 faceoffs; the Hawks won 53 percent as a team in the game.

Chicago was credited with 43 shots on net in the game — 23 in the third period. The Hawks were also credited with 22 blocked shots in the game, led by five from de Haan and four from Murphy.

40 thoughts on “Blackhawks’ Comeback Bid Comes Up Short Against Avs”