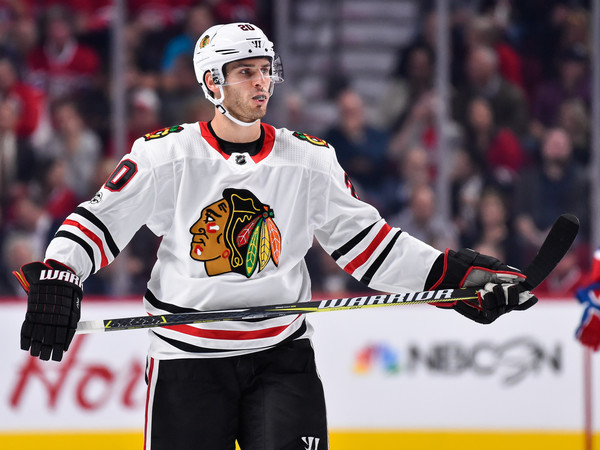 After an emotional overtime win in Edmonton, the Blackhawks sent Jeff Glass right back out there in Calgary – his hometown – to close out the calendar year against the Flames on Sunday night.

Unfortunately for Glass, the Hawks spent the first 26 minutes looking like they had a New Year’s Day hangover.

Calgary dominated the first period, out-shooting the Hawks 19-7. It looked like the Blackhawks would escape without allowing a goal but the players lost their attention – and the puck – and it cost them. Matthew Tkachuk scored with two seconds left in the first to give the Flames a 1-0 lead. The Tkachuk goal came with Tommy Wingels in the box.

Jordan Oesterle went to the box four minutes into the second and the it cost the Hawks again. Tkachuk scored his second power play goal of the night at 4:42 to extend the Flames’ lead to two.

The dust had barely settled from the Tkachuk goal when Sean Monahan scored 65 seconds later to make the score 3-0 in favor of the home team. The Hawks’ penalty kill looked bad and they hadn’t found any consistency with the puck.

However, Garnet Hathaway went to the box to give the Blackhawks their first power play of the night at 6:31. Chicago didn’t convert on the advantage but Oesterle scores his second of the season five seconds after the Hathaway penalty ended to make the score 3-1.

Oesterle picked up his second point of the night 56 seconds later when Jonathan Toews put home his tenth of the season to make the score 3-2.

To their credit, the Blackhawks responded after the Flames’ third goal and poured it on. The Hawks out-shot the Flames 18-12 in the second period and went to the third trailing by one.

Glass and Mike Smith both played well in the third period as both teams had good chances. Brandon Saad, who had an assist on the Oesterle goal, missed on a terrific point-blank opportunity at one point. But he wouldn’t be denied later in the period.

At 18:12 into the third – with Glass just heading to the bench for an extra attacker – Saad snapped a six-game goal drought with his 12th of the year to tie the game. Toews picked up the only assist on the Saad goal.

The third period would end with the score tied at three and for the second straight game the Hawks would head to overtime. Both sides had 37 shots on goal in 60 minutes and Glass once again stood tall when his team needed him and helped the Hawks get at least one point out of the game.

Unfortunately, Mark Giordano scored 52 seconds into overtime to steal the second point of the night and end the game, handing Glass his first career NHL loss.

The Hawks erased a three-goal deficit but didn’t have enough to finish the job and end 2017 with an overtime loss.

Toews skated 20:54 with four shots on net, two points (one goal, one assist) and one blocked shot while winning 12 of 20 faceoffs. Saad also had two points with three shots on net and one takeaway in 21:13. And Oesterle finished tied with Patrick Kane for the team lead with five shots on net; he had two points in the game as well while skating 25:40.

Connor Murphy had a team-leading four hits. Cody Franson and Ryan Hartman led the Hawks with two blocked shots each.

21 thoughts on “Blackhawks Comeback Comes Up Short In Calgary”