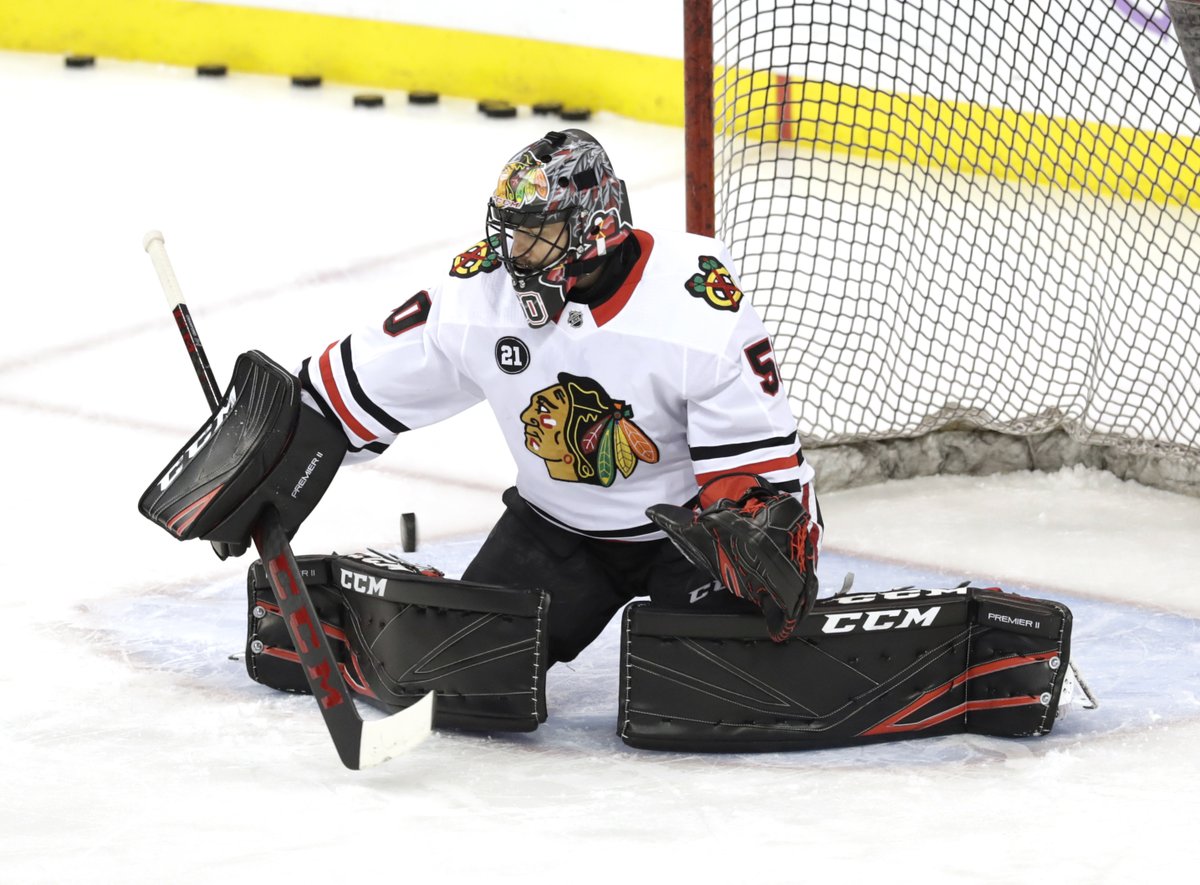 In a season where the Blackhawks have struggled at times to get the puck on net, they scored five times and lost in Winnipeg on Thursday.

Thursday night’s game in Winnipeg had it all. Crappy defense from the Blackhawks, questionable goaltending by the opponent, a bunch of goals early in all three periods by the opponent and a frustratingly close comeback come up short.

What was unique about this game was where the Blackhawks scoring came from.

Patrik Laine scored the game’s opening goal at 1:43 into the game. His 20th of the year was the first of four goals scored by the Jets in the first two minutes of a period on Thursday.

Chicago tied the game 1:20 later when Marcus Kruger scored his third of the year.

Kruger’s goal was assisted by Andreas Martinsen and Artem Anisimov, because of course.

The game would remain tied for 49 seconds. Nikolaj Ehlers scored his first of the game to give Winnipeg the lead once again.

But the Hawks came back again. A little more than four minutes after the Ehlers goal. David Kampf condifendly attacked the net and John Hayden followed the play with his second of the year.

Kampf and Erik Gustafsson picked up the assists on the Hayden goal. Connor Hellebuyck was leaving fat rebounds all night, giving the Hawks opportunities to hang around in a game that shouldn’t have been this close.

At the end of 20 minutes, the game was tied. The Hawks were out-shot 15-13 and outskated in much of the period, but were able to keep things just close enough that they could tie the game.

Ehlers scored his second of the night 61 seconds into the second period. Jacob Trouba scored 45 seconds later to extend the lead to two and it started to feel alot like the wheels were falling off again.

But at 9:31 the Hawks got back into the game again. This time it was Jan Rutta rifling a shot through the glove of Hellebuyck to cut the lead in half.

Kampf picked up his second point of the night with the only assist on the Rutta goal.

The second period ended with the Hawks trailing 4-3 but they were lucky to be within one. Winnipeg out-shot the Hawks 12-5 in the middle period, a stunning number considering Winnipeg scored twice early in the period. The lack of a sense of urgency was stunning – again.

Laine scored his second of the game on a power play 78 seconds into the third period, making the score 5-3.

At 9:45, Gustafsson gave a puck away in the worst way humanly possible and Ehlers went in all along on Crawford. He completed the hat trick and made the score 6-3.

But credit needs to be given where it’s due. The Hawks didn’t fold and give up like they did against Vegas.

At 13:10 Dominik Kahun made a nice play in traffic in front of the net, catching a puck and dropping it to his stick before tapping it home for his third of the year.

Hayden was credited with the only assist on the Kahun goal, giving him a two-point night.

With a little less than three minutes remaining in regulation, Alex DeBrincat started a rush with Patrick Kane and Anisimov that ended with Anisimov making things interesting. Suddenly the scored was 6-5.

That would be the end of the offense unfortunately. Jonathan Toews got a good look in the closing minute but couldn’t convert.

Jeremy Colliton appeared to be legitimately pissed off after the game – and he should be. The ridiculous mental mistakes that happen on a nightly basis have become a habbit, which is worse than a trend.

Martinsen skated 7:37 but put three shots on net, was credited with two hits and had an assist. Kruger appeared to twist a knee in the middle of the game and was limited to 6:01 but scored a goal before he was hurt.

Hayden, Kampf and Anisimov had two points each in the loss.

Dylan Strome and Branden Perlini were the only two forwards on the Chicago roster to fail to register a shot on net.

Not the best week for Corey Crawford.

He is the first #Blackhawks goalie to allow 6+ goals in consecutive starts in the same season since Alain Chevrier, Feb 8-10, 1990. pic.twitter.com/bZ80Hqr432

100 thoughts on “Blackhawks Comeback Comes Up Short Against Jets”