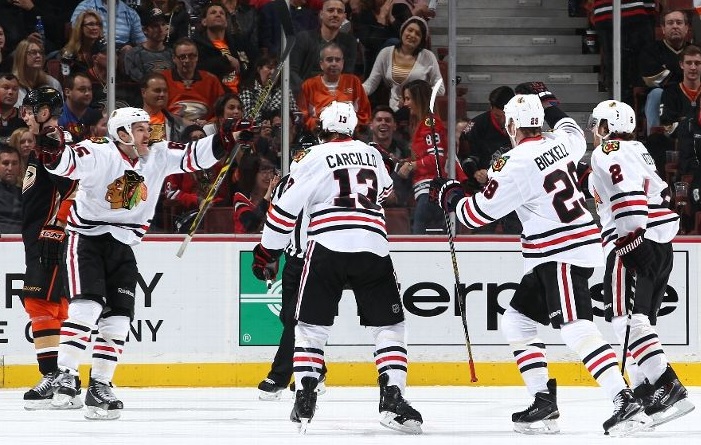 The line of Patrick Kane, Kris Versteeg and Brad Richards stayed hot and the Blackhawks overcame another superb performance by a young Anaheim netminder to beat the Ducks on their ice.

Richards started the offense, taking a long outlet pass from Brent Seabrook in and beating Fredrik Andersen at 7:58 into the first period. The assist extended Seabrook’s personal point streak to seven games, and was Richards’ fourth goal of the season.

Another line playing well together for the Hawks has been Daniel Carcillo, Andrew Shaw and Bryan Bickell. Five minutes after the Richards goal, a pretty passing sequence started by Bickell finished with Carcillo passing across the ice to a wide open Duncan Keith, who sent the puck back on net to Shaw. The easy tip-in for Shaw was his fifth of the season and second in as many games after returning to the lineup.

Anaheim cut the lead in half three minutes later on an odd series of events. Niklas Hjalmarsson hammered Ryan Kesler, but a shot wide of the net popped back over the cage where Hampus Lindholm bunted the puck out of the air and into the net.

The play got more physical in the second period as the Hawks carried the play. Half-way through the middle frame, during another strong shift from the Kane-Richards-Versteeg line, Richards dropped a puck behind the net where Versteeg flipped a no-look, between-the-legs pass to a waiting Kane in front of the net. Kane made the deposit to extend the lead to 3-1, scoring his ninth of the season and continuing a red-hot November.

Late in the second, the wheels predictably started coming off for Anaheim. In one series, Corey Perry lost his stick and then proceeded to hit one player, trip another and then tried to push the net off.

In the final seconds of the middle period, Kyle Palmieri made a dangerous, dirty play that left Johnny Oduya bloody in the ice.

Oduya was low coming up the ice, but Palmieri drove the Chicago defenseman’s head/shoulder into the boards. He was given a major boarding penalty and a game misconduct (and could hear from the league), while the Hawks were hit with a too many men penalty when Daniel Carcillo jumped the boards. Andrew Shaw (thankfully) held Carcillo back, which limited the damage to the bench minor penalty.

Oduya returned for the third period, but had a rough afternoon. Five minutes before he was hit by Palmieri, Rene Bourque went to the box for a couple minutes after he boarded Oduya.

Meanwhile, Kesler tried to get Niklas Hjalmarsson to fight in the wake of the hit. When Oduya’s partner declined the invitation, it effectively ended any chance Kesler had on making an impact on the game; he was a ghost the rest of the afternoon.

In reality, this game could have easily been 8 or 9-1 but Andersen was incredible. Corey Crawford stood tall the rest of the way and held on for another victory. Crawford stopped 23 of 24 in the win.

With 90 seconds left in the game, Perry cross checked Marian Hossa in the lower back. It was a dirty play by a player who had taken a number of cheap shots throughout the game. He’s a well-known turd who took himself off the ice for the game’s final moments by making a selfish, dirty play.

Kane scored into the empty net to finish the deal.

49 thoughts on “Blackhawks Continue Rolling, Down Ducks In Anaheim”