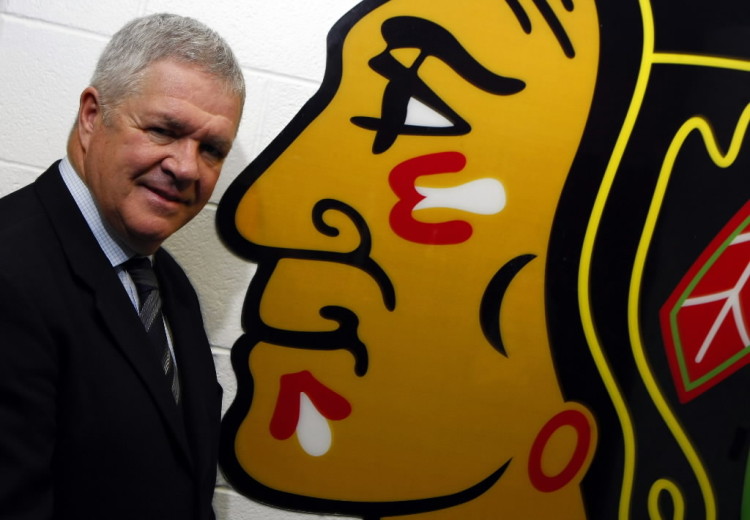 Since the beginning of the 2009-10 season, the Blackhawks have enjoyed one of the most successful stretches of hockey in the history of the franchise. While he is no longer part of the organization, the fingerprints of Dale Tallon continue to help the Blackhawks compete at a high level.

Tallon’s tenure as General Manager of the Blackhawks has received mixed reviews, largely from individuals who only remember the contracts given to Brian Campbell and Cristobal Huet. But the work Tallon did to build the franchise into a winner, and the lasting impact his work continues to have on the roster, should stay in the mind of Hawks fans.

Tallon took over as the GM in Chicago on June 21, 2005 and his work building the team is still astounding. When he departed, we chronicled his work building the team. Perhaps the highlight of his tenure was one of his first moves, dealing Matt Ellison anda 3rd round pick to Philadelphia for Eric Meloche and Patrick Sharp. But he did more than just draft and acquire championship pieces in building last year’s team.

Even after all of the changes made by current GM Stan Bowman this past summer, Tallon’s imprint is strong on the current roster. Look at these current players that were added to the organization while Tallon was either the Director of Player Personnel or General Manager:

All four of those players have been key components to this year, yet the value of the 2004 Draft (in which Troy Brouwer was selected in the 7th round) will always be overshadowed by the Skille selection in 2005; in the world where hindsight rules, selecting Skille four picks in front of the Kings taking Anze Kopitar will never be accepted.

And while fans second guess Tallon’s spending in free agency, another reality is that the Blackhawks wouldn’t be able to afford this year’s team if he hadn’t done such a great job retaining in-house talent. Consider these contracts: When you place these respective deals into the context when they were signed, each is a very good value.

Sharp signed for a deal that was, even in 2008, below market value for a versatile center/wing that was coming off a 36-goal, 62-point season in 2007-08. Today, with Sharp ranking third in the NHL with 20 goals, his cap number makes him one of the best bargains in the entire league. The average cap number of the top 20 scorers in the NHL right now is $5.875M; if you remove Steven Stamkos and Matt Duchene – both playing on entry-level deals still – the average jumps to $6.143M.

Seabrook and Duncan Keith were quietly establishing themselves as one of the elite defensive pairs in the league when Tallon gave Seabrook a respectable three-year deal. He had scored nine goals in 2007-08, but was the physical force next to Keith’s scoring and speed. The two continue to be great together, and were both selected to represent Canada in last year’s Olympics. While Keith was extended last year by Bowman, Seabrook will be looking for an extension as a restricted free agent this coming summer.

Brouwer showed some of his potential, scoring 10 goals in 69 games, in his first real shot in in the NHL in 2008-09, and signed for a relative bargain at the time. He became one of the more productive forwards on the roster last year, scoring 22 goals and ranking among the team leaders in hits while not racking up many penalty minutes. This year he continues to be a great asset to the team, continuing to be a physical power forward who can score while making very little impact on the cap. Brouwer will be a restricted free agent next summer.

Bolland, who put up 130 points (57 goals, 73 assists) in only 59 games with the London Knights in 2005-06, burst onto the scene with 19 goals in 2008-09, and looked like a lock to be a building-block center. While his back injuries have impacted his scoring output, he continues to play outstanding defense in Chicago and showed flashes of an offensive threat in the 2010 postseason.

And yet fans more likely remember the fiasco surrounding the extensions of Kris Versteeg and Cam Barker.

The future of the Blackhawksis in the hands of Bowman, who has made quality moves with pieces brought in by Tallon. He has loaded up the organization’s depth by trading players like Barker (for Kim Johnsson and Nick Leddy), Dustin Byfuglien (in a package for a couple picks and Jeremy Morin) and Versteeg (for Viktor Stalberg and two prospects), but continues to enjoy the spoils of Tallon’s hard work.

Tallon is also responsible for drafting some prospects that we’ve seen already in Chicago this year, like Brandon Pirri (2009 – 2nd round), Ben Smith (2008 – 6th round) and Evan Brophey(2005 – 3rd round). So when we see names like Pirri, Smith, Brophey, Dylan Olsen, Marcus Kruger, Kyle Beach, Shawn Lalonde and Igor Makarov bouncing around in the future, remember the man that selected them in the draft.

The fact is, Tallon had to make take some dramatic chances to get free agents to consider Chicago as a legitimate hockey market. Not only did he succeed in making the Hawks legitimate, but he built a champion.